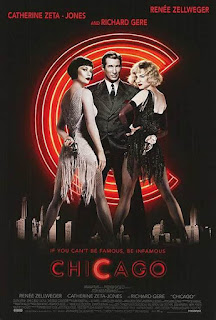 It’s become quite the fashion to knock Chicago. Heck I’ve done it myself. How did this mere musical win Best Picture? It’s not even as if the original production was much more than an entertainment. It’s another of those films diminished by whispers that it doesn’t deserve the title of Best Picture. But, look at the film with an unprejudiced eye, and you’ll see that this is the best stage-to-screen musical theatre adaptation since Cabaret. Chicago is such dynamic, high octane entertainment, you would have to a really cold heart not to enjoy it.

A heart as cold, perhaps, as most of the characters. Its set in a 1920s Chicago where it doesn’t matter what you are famous for, so long as you are famous. Who are the bigger stars? The people on stage of the infamous on death row? Roxie Hart (Renée Zellweger) is a wannabe who guns down her conman lover Fred Casely (Dominic West) when his promises of the stage career she’s dreaming of turns out to be all hot air. Roxie works out that she can turn her infamy into just plain fame – following the inspiration of vaudeville-star-turned-accused-murderer Velma Kelly (Catherine Zeta-Jones), who is now more famous than ever. With amoral lawyer Billy Flynn (Richard Gere) in their corner, can they play all sides against the middle and find freedom and fame?

Chicago’s debt to Bob Fosse is in almost every single frame. Rob Marshall’s brilliant choreography is inspired by Fosse’s own work for the original production. It means the entire film drips with the passionate sexiness of the best of Fosse’s work. It’s also inspired by Fosse’s Cabaret in its use of the musical numbers. There all the musical numbers we kept within the nightclub, acting as a subtle commentary on the events of the film. Here they occur in Roxie’s imagination, staged in a shadowy empty theatre with a mysterious band leader (a charismatic Taye Diggs) introducing each song. It’s a brilliant concept, that allows them to be staged with the sort of exuberance and theatricality that would look plain odd in a ‘real’ setting.

And what musical numbers they are! These are toe-tappingly, finger-clickingly fun, that will make you want to jump up and join in. Marshall’s choreography and direction is not only faultless, but also covers a range of styles. From the sultry opening of All That Jazz performed by Catherine Zeta-Jones, we get burlesque (When You’re Good to Mama), sensual sexiness (Cell Block Tango), knock-about farce (We Both Reached for the Gun), classic 1930s Astaire and Rogers (Roxie) and surreal madness (Razzle Dazzle). The one thing they all have in common is the high-octane energy they are performed with (no wonder all those dancers are so slim!), with no one leaving anything in the dressing room.

Chicago is possibly one of the best edited musicals ever made. Marshall gets a superb balance between camera movements, cutting and the dance numbers. We can appreciate – and see – every step of the intricate choreography, with clear camera movements and angles. But the film is also edited practically on the beat. Cuts accentuate changes in the tempo and even marry up with the exact movements of the dancers. Not only that, the numbers frequently cut from reality to fantasy and back again – and this parallel montage is superbly done, with perfectly timed transitions. The cutting complements each number so well, it actually makes them more exciting and dynamic. It’s a masterclass in using the language of cinema to accentuate the impact of dancing.

But Marshall manages to make Chicago not just a collection of amazing dances and fabulous tunes. In our celebrity worship age, Chicago feels increasingly more relevant – you can imagine Roxie would love to be on reality TV and would never be off Twitter. It doesn’t matter that she’s got no real talent (in fact it makes the fact that all the musical numbers are fantasies even more witty), she’s just desperate to be known. Shooting her lover is the best thing that’s ever happened to her and she’ll do anything to stay in the newspapers, from a fake pregnancy to playing the timid ingenue.

Everyone in Chicago is just playing the game. Velma is just as desperate to cling to fame – and her growing desperation at losing the limelight to Roxie is almost touching. Mama Morton, the quietly corrupt prison warden, lives vicariously through her inmates (she even dyes her hair to match Roxie’s). The media lap up the details of every killing, turning the trials into huge soap operas. And at the heart you have Billy Flynn, as much a showman as he is a lawyer, playing every angle and knowing its all about telling a good story rather than truth or justice.

Chicago is played with absolute commitment. Renée Zellweger is excellent as the fiercely ambitious, amoral Roxie, her fragile softness perfect for the image Roxie likes to project, just as she is able to twist her face into selfish meanness. Zeta-Jones clearly hadn’t forgotten her years of musical theatre, demonstrating she is superb singer and dancer, her vampish glamour perfect for Velma’s dark ambition. Richard Gere (in a role turned down by Travolta, as he ‘didn’t get’ the framing device) channels his natural charisma and good natured smirk into a role that could have been made for him. Reilly is surprisingly sweet and effective as Roxie’s put-upon husband and Latifah hugely entertaining as the knowingly manipulative Mama.

Chicago may “just be a musical” – but you’d be hard pressed to find a better entertainment than this. The musical numbers are superb, the song and dance numbers great and the film still manages to land some blows on celebrity culture. Hollywood has always loved musicals – can you imagine how the viewers of Broadway Melody would have responded if they had seen this? – and with Chicago we get something we’ve not seen since the golden days of Bob Fosse. There are few Oscar winners as straight forwardly entertaining as this.