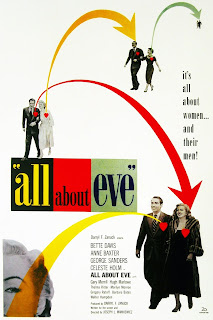 At a theatre awards ceremony, a table of people watch Eve Harrington (Anne Baxter) collect the Sarah Siddons Award for Distinguished Achievement. She thanks them all effusively. They stare at her with mute loathing. I guess that’s show business. Mankiewicz’s biting and witty film boasts possibly one of the greatest scripts for the movies ever written, a biting expose of rivalries and backstage politics, that also manages to find a lot of warmth for its characters. Arch, but in its own strange way tender hearted and hopeful, its Mankiewciz’s greatest achievement.

Margo Channing (Bette Davis) is a gifted actress and one of the leading lights of Broadway, as well as the on-stage muse of playwright Lloyd Richards (Hugh Marlowe), close friends with his wife Karen (Celeste Holm) and in love with her director Bill Sampson (Gary Merill). But Margo is just beginning to worry, now she has reached her forties, that her parts are drying up. Into her world arrives Eve (Anne Baxter), a besotted fan who swiftly becomes first her assistant then her understudy and eventual replacement. Despite her sweet exterior, Eve is fiercely ambitious determined to find fame and success – and only cynical theatre critic Addison DeWitt (George Sanders) seems to notice.

All About Eve cemented Mankiewicz as Hollywood’s go-to for high-brow literary entertainment. Which is odd when you think about it, because what makes All About Eve work – and enduringly popular – is that it’s a fantastically quotable soap, played with relish. It’s not a million miles away from a ten-part, cliff-hangers aplenty Netflix drama. But it stands out because of Mankiewicz’s craft – when you pen lines as cutting, acerbic, tender and true as those in All About Eve, is it any wonder that Hollywood sees you as the next Fitzgerald?

And the dialogue is sparkling, from start to finish. From a cuttingly dry opening voiceover from George Sander’s Addison DeWitt – beautifully delivered, crammed with cynicism, cattiness, pride and purring contempt (“Minor awards are for such as the writer and director since their function is merely to construct a tower so that the world can applaud a light which flashes on top of it.”) that it sets the tone for a film where dialogue is king. Mankiewicz is not much of a visual stylist – only the final shot, a besotted fan starring into an endless series of mirrors – sticks in the mind, and his approach as a director is intensely theatrical, but it doesn’t matter when his dialogue sings.

All About Eve works as both a supremely entertaining peek behind the curtain and also a neat parable about ageing, change and relevance. Perhaps there are few better examples of the changing of the guard, than the impact of growing old on a woman in theatre: from girlfriend to mother, with hardly a role in between. It’s the change Margo is dreading. And as she grows too old for her leading lady roles, what has she actually to show for it? Not much in the way of family or happiness.

If Eve looked closer, perhaps she’d wonder if it was worth it. As Margo makes clear in her dressing room and at a party thrown for Bill, she’s not got much to look forward to. (It’s not often commented on that the film’s most famous line, “Fasten your seatbelts it’s going to be a bumpy night”, is followed by an evening of Margo’s maudlin self-pity). For all her glamour and fame, it’s clear Margo is unhappy: “So many people know me. I wish I did” she says at one point, and for all the whirlwind of her life, she’s not exactly over-burdened by close friends. 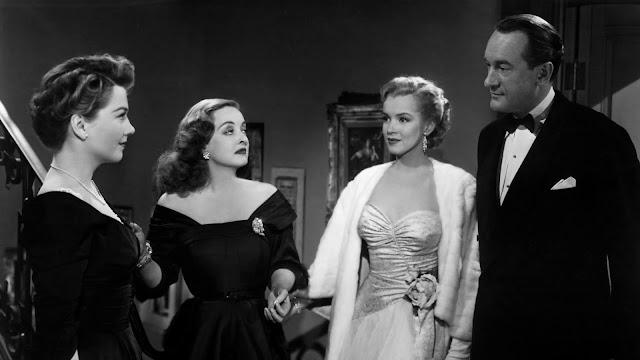 It’s easy to forget, because All About Eve is so well known for being a bitchfest – and Mankiewicz’s cutting one-liners are genius – that you forget its lead is a sad and lonely figure, and the film presents a conservative view of motherhood being a crucial role for a woman. We don’t automatically remember this speech’ but it’s crucial for Margo: “There's one career all females have in common - whether we like it or not: being a woman. Sooner or later, we've got to work at it, no matter how many other careers we've had or wanted. And, in the last analysis, nothing is any good unless you can look up just before dinner or turn around in bed - and there he is.”

Margo is the signature part for Bette Davis, but memory has distorted it. You can expect it to be a parade of sharply barbed attacks, but it is much more than this. Yes, she does these with aplomb (“I wouldn't worry too much about your heart. You can always put that award where your heart ought to be”), but under the regal grande dame, there is a rather vulnerable woman, scared about where her life is going and terrified of being unloved. For all the Davis fireworks, it’s an affecting – and perhaps this is why it became such a gay icon, during those years of people forced into the closet –vulnerable and lonely performance.

That vulnerability contributes to the sense of vampire story. Eve arrives in the dead of night, inveigles her way into Margo’s life and then slowly takes that life over. Eve is almost draining Margo’s life force, leaving her even more aware of the lonely impact of her choices. There’s the suggestion of sexual obsession in Eve – standing on stage, holding Margo’s costume in front of her and imagining the applause, Eve seems as much besotted with Margo as she does with becoming her. And of course Eve is a unknowable fake. Anne Baxter’s gentle, butter-wouldn’t-melt sweetness is just the right side of phoney. Only Thelma Ritter’s (very funny) bitchy dresser detects dictates her invented backstory about a deceased husband is baloney (“What a story! Everything but the bloodhounds snappin' at her rear end.”).

Later Birdie will comment Eve is studying to become Margo – and that’s spot on. As Eve moves further up the ladder, Baxter drops her gentleness and becomes increasingly steely. “A contempt for humanity, an inability to love and be loved, insatiable ambition - and talent. We deserve each other” Addison will tell her – and he’s spot on. Eve’s driving motivation is ambition, and anyone is fair game if it will help her move up the greasy ladder of theatrical success. 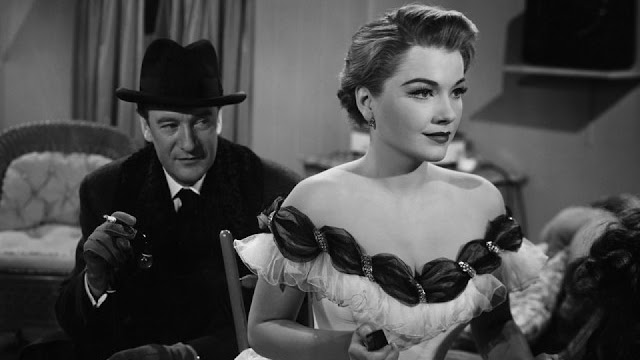 Eve uses everyone. She manipulates Karen into making Margo missing a performance – then invites the press in advance to her performance, which is met with raves. Afterwards Eve gives an interview in which she lacerates Margo as a bitter has-been holding her back. It’s enough for Karen – and Celeste Holm is very good as this gently supportive woman, with the firmest principles of anyone on show here – but the men can’t let go. It takes an attempted seduction to drive away Bill, but the weaker Lloyd seems to be sucked into her web (the film is coy about the implied affair). It should be clear that Eve is a force draining energy out of everything she can, determined to get to the top.

And we know she gets there: after all we’ve seen her win the Sarah Siddons prize! But Eve has none of Margo’s soul. The film ends with her meeting the even more vainly empty Phoebe, who Addison immediately recognises is intent on the same scheme as Eve was. And so, the whirligig of time brings in its revenges. Eve has learnt everything from Margo, except how to be a human: she has all her technique and none of her heart. The film even manages to feel a bit sorry for her – a woman who has achieved everything she wants, and finds it makes her neither happy nor popular.

It’s the heart of Mankiewicz’s film, perhaps even its warning message. What is the point of all this greatness, if all you have to show for it are false-friendships with poisonous pals like Addison? It’s the moral message behind a film filled with one-liners and wonderful speeches, a masterclass in theatrical writing for cinema. Bette Davis is superb, funny and heartfelt. Baxter is quietly terrifying. Ritter and Holm are superb and Sanders is so well case in this role, you wonder if Mankiewicz somehow invented him specially for it. All About Eve may be grand, soapy entertainment – but soap has never been smarter than this.