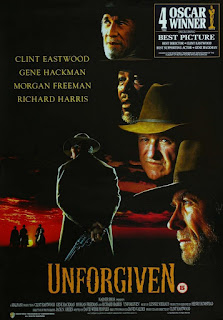 The Western has a reputation for “white hats” and “black hats” – goodies and baddies, with sheriffs taking on ruthless killers with the backdrop of civilisation hewn out of the wildness of the West. It had passed out of fashion by 1992, and this memory is largely what remained. That helps describe the impact of Unforgiven. A great revisionist Western, searingly honest about the brutality of the West, it was made by an actor more associated with the Western than almost any other since Wayne, Clint Eastwood. Articulate, sensitive, intelligent and superbly made, it marked the transition of Eastwood from star to Hollywood artist. It’s still his greatest movie.

In 1880 in Big Whiskey, Wyoming, the face of prostitute Delilah (Anna Thomson) is slashed with a knife after she sniggers at a customer’s unimpressive manhood. The two cowboys responsible are ordered to compensate her pimp by sheriff “Little Bill” Daggett (Gene Hackman). Disgusted, the other prostitutes chip in for a $1000 bounty on the men responsible. A young man calling himself ‘The Schofield Kid’ (Jamiz Woolvett) seeks out famed gunslinger William Munny (Clint Eastwood) to help claim the bounty. Once a brutal killer, Munny is now a repentant widower raising two children – and desperate for money. Recruiting old friend Ned Logan (Morgan Freeman), Munny rides to Big Whiskey – but will he return to his violent ways?

Unforgiven explodes the romantic mythology of the West, in a way that really made people sit up and notice. In truth, revisionist Westerns had been made for decades before 1992 – Eastwood himself had already directed at least two – but as the public hadn’t flocked to see films like McCabeand Mrs Miller (wrongly!) the main memory of the Western was of the (excellent) likes of High Noon, Shane and John Wayne (but not the Wayne of Red River). Nearly every classic Western, to be frank, has a dark heart and questions the mythology. But few films so starkly exposed the violence, ruthlessness, cruelty and empty morality of the West – or more viciously attacked the romanticism built up around it.

In Unforgiven characters – particularly Munny – are constantly haunted by their past killings. The violence described is always cheap, pointless and brutal, fuelled by huge amounts of booze. Munny never seems to remember why he even did something – be it blowing a man’s face off to killing women and children. Whenever we hear about the past, it is a parade of short-tempered, violent, pissed men using the gun as a first-and-last resort, and never thinking of the consequences. The real ‘heroes’ of the West kill without batting an eyelid and, no matter how charming they might seem, have a terrifying capacity for sadism and violence. Place Munny back into this environment, and it isn’t long before his long-hardened ease with killing emerges once again. 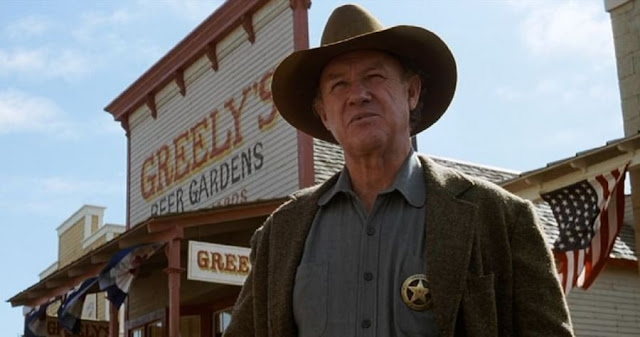 It’s men like this the bounty will draw to Big Whiskey – and Little Bill knows it. Little Bill is superbly played by Gene Hackman (he won every award going), full of bonhomie and charisma matches only by a ruthless “end-justifies-the-means” philosophy that sees this law-giver carry out increasingly brutal and sadistic acts to preserve order. Brutally beating gunslingers – and worse – are justified in his mind, to prevent the chaos and slaughter they bring. And he mocks the pretensions of gunslingers fancying themselves romantic heroes, but doesn’t half enjoy telling tales of his own of exploits.

It’s not a surprise that the film’s face of law-and-order is shown to be just as at ease with violence as the killers he is protecting the town from. It’s part of Unforgiven’s intriguing study of morality. When, if ever, is violence justified? Do the ends justify the means, or is killing never acceptable? Or is it fine if you are convinced the cause is right or the target deserving? How long before you’ve slid so far down this slippery slope, that questions of right-and-wrong don’t even enter your head before you pick up a gun?

There couldn’t be a better face for this than Eastwood. Clint looks old, ravaged and tired, just as Munny is, haunted by the screams of men he no longer even remembers. He’s soulful enough to know he has no soul, capable of understanding he needs to change, but also able to revert to dealing out murder. Eastwood deconstructs his own screen personae of “the man with no name” into an old man who can’t face his past and is filled with regrets. As the film progresses, more and more Munny rebuilds his ease with killing – eventually exacting a revenge that leaves a trail of bodies behind.

There is nothing romantic about any of this: despite the best efforts of journalist WW Beauchamp (played with wide-eyed gusto and energy by Saul Rubinek) to inject it. Beauchamp has made a living turning the adventures of gunslingers into romantic best sellers – and is the films’ clearest attack on Hollywood itself for romanticising an era of violence and mayhem. Beauchamp is the biographer of genteel killer English Bob, who has made his money “shooting Chinamen” for the railroads. Played with a self-important grandness by Richard Harris (one of his finest performances), English Bob (actually a working-class oik masquerading as a gentleman) is living his own press release as a gentleman gunslinger. The fact that – as Little Bill delightedly reveals – he is just as much an alcoholic murderer with no principles is just another example of how little reality and fiction meet.

At least Munny accepts he’s a bad man. Perhaps that’s why his late wife shocked her mother by marrying him – he has enough self-knowledge to want to change even if he can’t. But of his three companions – Morgan Freeman is brilliant as the jovial Ned who has lost his taste for killing – only he lasts the course. That’s not a good thing. When we finally see a fully reverted Munny, downing a bottle of whiskey and shooting up a saloon he’s terrifying: brutally efficient with shooting, in a way that panicked shooters can never compete with. 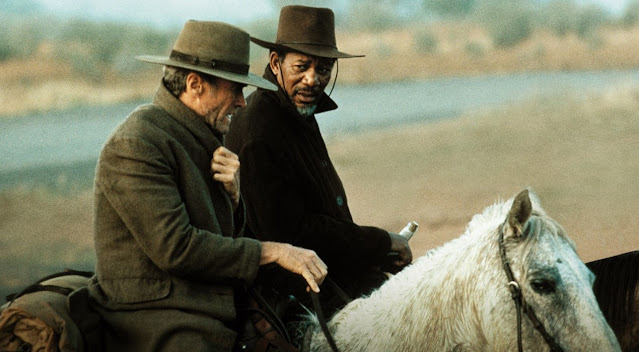 In Unforgiven violence comes with a cost. A shot man takes a long time to die. The women who called most for violence, are left speechless by meeting the reality of it. A man’s soul is marked forever by taking life – “It’s a hell of thing killing a man. You take away everything he’s got and everything he’s ever going to have”. It’s a responsibility only a fool takes on lightly – or sober. Munny and Little Bill are they only ones we see who have come to terms with it in some way, one as a necessary evil, the other as an evil he can switch on and off like a tap. Their ruthless coldness is hardly an advert for wanting to be part of this world.

Eastwood’s masterpiece tackles all these ideas with gusto, while telling an engrossing story powered by brilliant performances – Hackman in particular, Freeman and Eastwood are all stunning – and asks you to take a deep look at what we admire so much about violence. It does this in a subtle, autumnal way (with a haunting score), its muted colours helping to drain any further romance from the West. Gripping, thought-provoking and engrossing, Unforgiven is one of the greatest of Westerns.