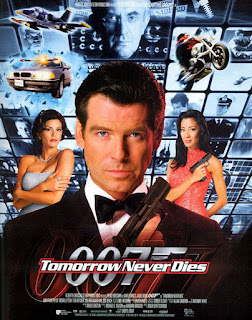 For Pierce Brosnan’s second Bond film, they knew there was life in the old dog yet. GoldenEye’s success meant Tomorrow Never Dies could be all about bangs and fun, a Moore-esque caper with a modern touch. And fun it certainly is – exciting, amusing and with some top gadgets. This doesn’t re-invent the gun barrel, but it gives us a hell of a ride.

A British Navy ship is sunk in Chinese waters (the navy is always so luckless in Bond films!) and a Chinese MiG is shot down. Each side blames the other: but MI6 believe they are both being played against each other by a third party – media mogul Elliot Carver (Jonathan Pryce). There’s 48 hours to find the truth and stop a war. Best send Bond (Pierce Brosnan) to Carver’s HQ to shake things up, not least because he has a past relationship with Carver’s wife Paris (Teri Hatcher). Soon partnering with Chinese Intelligence agent Wai Lin (Michelle Yeoh), the two work to expose Carver’s dastardly schemes to start a war to increase his ratings and secure those lucrative Chinese broadcast rights.

Tomorrow Never Dies sometimes has a by-the-numbers feel to it – probably because the script was written on the go, with only locations and set-pieces decided in advance. Usually that’s a recipe for disaster, but with TND it works. Probably because everyone looks like they are having a whale of a time making it and the tongue is wedged so firmly in the cheek it’s practically touching the ear. And its concept of a mogul using fake news to manipulate the world seems alarmingly prescient today – think how powerful Elliot Carver would be if he ran Twitter (as he surely would today).

You can forgive Tomorrow Never Dies almost anything because it has so many stand-out sequences. The film has a (literally) explosive start, with Bond racing against time to fly some nuclear missiles out of a terrorist trading camp, before a British cruise missile blows the base sky high (and “make Chenoboyl look like a picnic”). Naturally the destruction as Bond lays waste to the camp makes you wonder why they wasted the money on a cruise missile when Bond can destroy the place for free.

Front-and-centre though is the “Bond drives a car through a shoot-out on the back-seat with a remote control” sequence. Which when written down, captures only about 5% of the sequence’s delight. Narrated by an over-cautious sat nav (constantly warning about hazards ahead, while the car is pummelled by bullets), we get all the gadgets we expect (bullet-proof glass, rockets, caltrops, a buzz saw that conveniently rises to the exact height required to cut through a steel wire obstacle) while also watching Bond masterfully steer a car around a multi-storey car-park on his phone from the back seat. Of course, Brosnan knows it’s silly and telegraphs his enjoyment, letting out a chuckle when he reinflates his tyres after driving over his own caltrops (I love this moment).

There is a cursory sense of mystery, but TND wisely doesn’t have much patience with that. Bond is nominally under-cover at Carver’s HQ as a banker (inevitably using his own name) but, just like his Moore-heyday, Bond’s undercover skills are hilariously bad and his hints clankingly blunt. Fortunately Carver follows Bond villain form, confirming any suspicions by ordering his goons to beat Bond black-and-blue (more fool them, as Bond uses every instrument in a sound proof recording studio to best the baddies).

This was Brosnan in absolutely top form. He’s extremely charming, handles the action very well and gets more than a few grins. He looks like a guy just delighted to be there, living the dream of playing Bond. He’s both self-deprecating and cocksure and manages to be both a believable ruthless killer and a sort of charming little-boy-lost when needed. He loves a pun in a way no other Bond apart from Moore has done (“brushing up on a little Danish” indeed…) and his chemistry with Michelle Yeoh is superb, the two playing off each other like a sort of all-action Morecambe and Wise.

It’s a Bond where comedy is to the fore. An expensive satellite at Carver’s HQ is introduced (“It’s worth $300 million. You break it, you bought it”) solely so Bond can trash it without a second glance. A hitman (hilariously played in a cameo by Vincent Schiavelli) assures Bond he could “shoot him from Stuttgart” and still make it look like a suicide then apologises with embarrassment when he has to delay the hit to ask Bond how to unlock his car (“I don’t know what to say. I feel like an idiot.”). Moneypenny even calls Bond a “cunning linguist” after she interrupts by phone Bond’s tryst with a Danish professor (a joke which I certainly didn’t get when I first watched the film at a young age).

The lighter side of the script works more successfully than some of the attempts at emotion. The script bluntly states Bond had deep feelings for Paris Carver, but this never comes across at all in the performances. Probably because the emotions were torpedoed by the blatantly obvious lack of chemistry between Brosnan and Hatcher (allegedly they couldn’t stand each other). This is made all the more obvious by contrasting it to the delightful chemistry between Brosnan and Yeoh (watch the motorcycle chase with them handcuffed together – brilliant stuff, and Yeoh is excellent in this). When Paris is dispatched early in the film, Bond is cut up about it for literally 10 seconds before he’s having a whale of a time in that car park chase.

Like many Bond films you can see how the franchise had become besotted with the latest “cool thing” in cinema. In this case, the film seems deeply in love with John-Woo-Hong-Kong-action gunplay. Bond probably fires more automatic machine guns in this film than he does in all the rest of the franchise put together, and the film’s finale (the dullest set-piece) is a run-of-the-mill shoot-out on a stealth boat, that feels pretty familiar from the series’ countless “face off in a sub” endings.

Spottiswoode directs with a straightforward lack of flair. Pryce has fun going OTT (and channelling Gus Hedges from Drop the Dead Donkey) as Carver even if the part is a bit under-written. But the main joy is in watching Brosnan have a huge amount of fun running around, blowing things up and shamelessly smirking through some dodgy puns. His Bond may never have been the most complex interpretation, but at his best I’m not sure anyone else was as purely enjoyable. Much like the film.