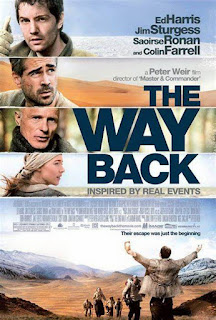 During the Second World War, Stalin spent almost as much time rounding up potential enemies of the state as he did fighting the Nazis. This was also his exclusive focus during the early years of the war when, in league with Nazi Germany, Russia invaded half of Poland. Polish officers were rounded up – many were massacred but Katyn, but some were sent to the gulags of Siberia. Among that number is Janusz (Jim Sturgess). But he is desperate to get home – so, with a collection of fellow prisoners, including American Mr Smith (Ed Harris) and hardened criminal (and pro-Stalinist) Valka (Colin Farrell) he escapes. Trouble is freedom is over 4000 miles away – through Siberia, Mongolia, the Gobi Desert and the Himalayas. To even contemplate the walk is staggering.

Which is more than you can say about the film. I never thought I would see a Peter Weir film that left me cold, but I now I have. How did Weir manage to make a compelling survival story into a film at times so unengaging you feel you have done the walk in real time? The real problem is the lack of characters. Halfway through the film the group encounters a young woman (played by Saoirse Ronan). She asks them what their background is – and they tell her (off-camera). And she tells them to Ed Harris. And he tells her his backstory off camera – and she tells it to Jim Sturgess. And there is the problem in a nutshell.

We’ve spent nearly an hour with this lot by then – and in that hour you’d struggle to know their names and certainly don’t know anything personal about them. We have no idea where they came from, what they lost or what they are yearning to return to. An hour during which it was hard to tell them apart (except for the more famous actors) but the film still wants me to invest in them fighting against the elements. Now, I know for many people, this isn’t be a problem. But for me it was an insurmountable obstacle.

I can admire the work that has gone into location shooting, make-up and costumes that show the ravages of this impossible journey. But, at the end of the day, if I know nothing about these characters and have no reason to invest in their fate, all the skill in the world won’t make this into a film I can invest in. Look at the great survival films – from The Flight of the Phoenix to another true-life (more of that later) story Apollo 13 – what makes them work is the dread that something awful might happen to the characters we care about. Without that feeling, it’s just pictures, nothing more. Weir’s mistake is to focus so much on how the Gulag crushes personalities and creates alliances of convenience, that he gives us no reason to bond with the characters.

The wispy, thin script gives very little for the actors to work with. Colin Farrell has the best part as a blackly comedic man of violence (and he drops out well before the end of the film). Mark Strong makes a big impact from a few short scenes as a prisoner who is all talk but no trousers. The others make little impression. Ed Harris does his trademark gravel, Saoirse Ronan adds much needed warmth (and provides a hugely needed audience surrogate figure – again far too late) but Jim Sturgess lacks the presence or force of character to carry the film. Force of character is missing throughout – you don’t get the sense of the strength of will needed to even undertake this, not to mention the psychological impact of this level of hardship.

It’s also oddly paced – you really lose track of how far or how long they have been travelling. Big time jumps take us from the first day of the escape to a cave in the forest which (we assume) they have spent weeks travelling to, reaching the edge of starvation. Then, before we know it they are at the border, then Mongolia. The film gets lost in a huge sequence in the Gobi Desert (for some reasons the characters always walk in the day and rest at night, the exact opposite of what anyone would do) – emerging with 12 minutes to go, bounding over the Himalayas in about 30 seconds (was it too difficult to film there?). The film caps with a bizarre “he walked forever” sequence, with superimposed walking feet over newsreel footage – a failed attempt to hammer home that Janusz needed to wait until the end of the Cold War before he could get home.

It’s nominally based on a true story. The author of the book it is based on is believed to have either invented or stolen the story from someone else and there is huge debate about whether it happened or not and if so who did it. This should have given Weir some freedom – but instead it seems to have given him too little to build on. Most damning in it I can’t find any reason in it to care whether they make it to freedom or not, instead the time dragging as much as the characters swollen feet. A terrible missed opportunity – and a rare misfire from a great director.