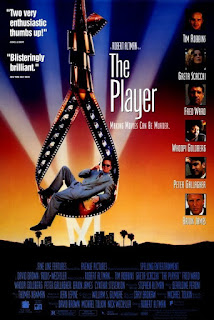 Hollywood: it’s a hell of a place. Sharks ain’t got nothing on studio power-brokers, hunting product to sell. After all, not a single letter of “Art” appears in “Hollywood”. Griffin Mill (Tim Robbins) hears 50,000 pitches a year and gives the green light to ten or twelve. Mill is plagued with death threats. Confronting the writer (Vincent D’Onofrio) he believes responsible, he kills him in a fight. Can he get away with murder and successfully romance the writer’s artist girlfriend June (Greta Scacchi)? And, even more importantly, can he protect his job from hotshot executive Larry Levy (Peter Gallagher)?

Robert Altman had been working outside of the studios for well over two decades after negative experiences creating his critically acclaimed but hard-to-digest masterpieces (including McCabe and Mrs Miller and The Long Goodbye, the sort of films only Altman could make). His career had drifted during the 1980s, as his edgy, ‘disciplined ill-discipline’ approach (with overlapping sound and roving cameras) moved out of fashion. The Player was not only his payback expose on the studio system, with the exec a sociopath, but also his triumphant comeback to the frontline of film-making (he earned several awards, including a nomination for Best Director).

The Player is nominally a comedy, but in the way of Altman it also fits half a dozen other labels: from film noir to corporate satire. Above all it’s a maverick’s view of a system designed to produce product (Mill constantly speak of his films like this – he would love our modern age of “content”). The studio’s offices are lined with posters from classic Hollywood – but the studio produces the most crowd-pleasing cookie cutter movies you can imagine. It’s all about squeezing in all the ideal elements a film must have: “Suspense, laughter, violence. Hope, heart, nudity, sex. Happy endings. Mainly happy endings.” (In a neat subversive twist, these are of course all present in The Player – but then it’s to be expected when what we are seeing might actually be a film within a film).

Film pitches all have an air of desperation, every idea boiled down to simple, easily digestible slogans. It’s nearly always a combination of two other films – “Out of Africa meets Pretty Woman!” – or involves the biggest stars (“Julia” and “Bruce” were those two stars – and both actors hilariously spoof themselves in the film’s climactic sequence). Ahead of its time, the film even features a pitch (from a cameoing Buck Henry) for The Graduate 2, a nostalgia tinted exploitation of the IP with all the original cast, that basically sounds like the sort of thing they’d actually make today.

There is no place for film-making as an art – any idea that can’t be compressed into 30 seconds is worthless. Mill’s knowledge of film is patchy at best, his attempt to make small talk about Bicycle Thieves boiling down to “Perhaps we should remake it?”. The film (possibly the film within a film within a film), Habeas Corpus, pitched by Richard E Grant’s pretentious writer (“No stars! No pat Hollywood endings!”) is only attractive because it has the wisp of Oscar about it (and Oscars mean Big Bucks). Even then, Mill plans to rework the whole film into exactly the sort of pat-Hollywood romantic thriller Grant’s character claims to hate (no character will support this decision more than Grant’s sellout writer). The only person who seems to actually watch films is Fred Ward’s studio head-of-security – and at least half of his references are met with blank incomprehension. When Griffin makes a speech donating the studio’s old films to a cultural library, his words about art and culture are incredibly hollow. 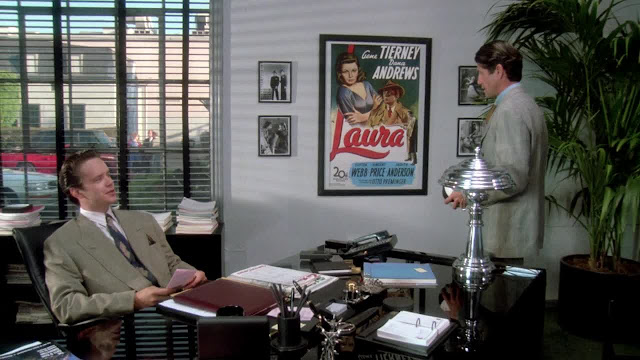 This vicious satire of the shallow culture of Hollywood – Larry Levy’s up and coming executive attends AA solely to network, not because he has a drink problem – is wrapped up in a beautiful noir framework, that’s brilliantly a few degrees off reality (for reasons that later become clear). Deluged by death threats from (he surmises) a disgruntled writer, Griffin meets the man he suspects – a pretentious holier-than-thou wannabe, played with chippy fury by Vincent D’Onofrio – who he beats to death in a neon-lit carpark, after a dig too far about Mill’s job security (as nothing threatens these guys more than the prospect of being drummed out of town).

Altman’s film wonderfully echoes the neon lit shadows of classic noir, while building a homage filled trap around Mill, desperate to escape punishment. Mill of course has killed the wrong man – and his stalker knows it – and his own heartless-but-effortlessly-cool business dealings are contrasted with his efforts to avoid the dogged pursuit of a police department (led, in a curious but just-about-effective piece of casting, by Whoopi Goldberg) correctly convinced he is guilty. The film asks, how much does morality intrude on Mill, when he’s led his whole life trampling people: isn’t literally killing someone only the next step up from all that metaphorical killing he’s been doing?

His one weakness is falling in love with his victim’s girlfriend, an artist played with a breezy sexiness by Greta Scacchi. Scacchi’s June is intriguingly unknowable – how much does she suspect Mill, and how much does she even care? – and the dance of seduction and suspicion between them is highly effective, culminating in a tastefully, imaginatively but highly sensually shot sex scene (built from Scacchi’s refusal to do a nude scene – instead the nudity comes from a full frontal of Robbins emerging from a mud bath).

Scacchi’s June feels like halfway between a real person and a movie construct – and that’s a deliberate effect in a film which, the ending suggests, may well have been a movie within a movie. Mill takes a pitch in the final moments from his actual blackmailer, who outlines the very film we have been watching, a pitch Mill accepts on condition the film (he?) gets a happy ending: cue Mill arriving home to June and the two of them using the same pat Hollywood pay-off lines to greet each other, we just saw Bruce Willis and Julia Roberts mouth in Mill’s happy-ending for Habeas Corpus. Apply the logic of a film to all the action and it suddenly makes sense on a whole new level, as a beautifully judged exploration of the very crowd-pleasing elements Mills praises, repackaged in a sharp and bitter satire.

Tim Robbins performance of restrained amorality is vital to the film’s success. In his career, any weakness is deadly – a mantra he applies to his interactions with the police and with June. Mill is so eerily controlled – fear is the only emotion he categorically shows, guilt never crosses his mind – you start to wonder if he even has a real personality. But, in the movie’s structure, he’s both a real person and also a construct whose life echoes scenes from the movies whose posters fill his office.

Altman balances these ideas of truth and reality perfectly within the studio satire. The film is astonishingly well-made, all Altman’s trademarks of overlapping dialogue and roving camera present and correct. It opens with a hugely confident seven-minute tracking shot around the studio, which feels like a real “I’m back!” statement – and is beautifully and wittily done. The film is crammed with dozens of celebrities playing themselves (they were given no dialogue and encouraged to improvise scenes), all of them keen to show they were in on the joke.

The Player is dark, witty and very clever, one of Altman’s sharpest and most enjoyable films. Crammed with echoes of film noir and a brutal expose of Hollywood business practice, it’s very well performed and keeps just enough lightness and humanity (it encourages to empathise, but not sympathise, with Mill, for all his amorality) to also be entertaining. One of the great films about Hollywood.