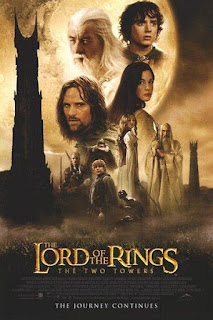 After Fellowship of the Ring we knew we were in safe hands. So, the real question was would The Two Towers continue to win over long-term fans and new-comers to Middle Earth? Would Jackson pull off the difficult middle chapter, resolving some things, but leaving us with enough tantalising hooks? He succeeded: for many The Two Towers is their favourite film in the series.

The fellowship is broken. Boromir (Sean Bean) and Gandalf (Ian McKellen) are dead. Frodo (Elijah Wood) and Sam (Sean Astin) are making their own way to Mordor – now guided by the former ring-bearer, the dangerously untrustworthy and unbalanced Gollum (Andy Serkis). Aragorn (Viggo Mortensen), Legolas (Orlando Bloom) and Gimli (John Rhys-Davies) are tearing across the land of the kingdom of Rohan following the orcs who kidnapped Merry (Dominic Monaghan) and Pippin (Billy Boyd). Meanwhile, the dark forces of Saruman (Christopher Lee) are moving against Rohan and its sickly king Theoden (Bernard Hill), determined to destroy it. War has truly come to Middle Earth – but can the return of an old friend help to turn the tide? And will Frodo and Sam find safety or danger when they meet Boromir’s brother Faramir (David Wenham)?

Hard to believe considering the scale of the first film, but Jackson’s second Tolkien adventure ramps up the scale even further. It continues the immersive capturing of the look and feel of the novels, while reconceptualising it into something closer to a stirring, gripping action epic. The Two Towers is awe-inspring in its scale and world-creation, building towards one of the all-time great cinematic battles as the few of Rohan hold out against the massed forces of Saruman at Helm’s Deep.

Just as in Fellowship the pace and tension is heightened. With the heroes split into three groups, there are a number of balls to juggle. But Jackson and co-screenwriters Fran Walsh and Phillipa Boyens superbly intercut the more linear book chapters – feeling free to shift orders, motivations and inventing their own narrative flourishes to link events together. The film adapts around 13 of the novel’s twenty chapters (the rest being assigned to the other films), but is so perfectly paced it never feels overstretched or disjointed. They even add more material involving Saruman, making this arch-manipulator a larger presence in the film than in the novel.

The Two Towers radically changes many of the events of the novel – but in most cases (except one) this is done with such respect for Tolkien that even most fans overlooked them. So, it hardly matters Theoden’s motivations for making a stand at Helm’s Deep have radically changed or that the films add warg action or has Aragorn presumed dead at the halfway point. Elves turning up to fight at Helm’s Deep is such a “Hurrah” moment, only the most extreme Tolkien purist could object (they would have objected a lot more to the original plan to have Arwen fight there). Merry and Pippin’s interaction with the Ents (living trees) are re-purposed to give them greater agency.

In fact, the changes to Faramir were the only ones anyone objected. In the novel Faramir is pure-of-heart and untempted by the Ring. With much of the novel’s Frodo material transferred to The Return of the King, Jackson, Walsh and Boyens needed to make Faramir “an obstacle”. Cinematically, the idea of Faramir trying to take the Ring to Gondor – motivated by the urge to win the affection of his distant father – made perfect sense (and Wenham delivers the character very well).

But for many book fans, this was a travesty of a beloved character (for all that Faramir eventually proves his quality). I’ve never met a book fan who wasn’t displeased by “movie Faramir”. For those familiar with the films, there won’t be a problem – but I can see the point. The character is clearly, in a subtle way, different from the more whimsical and unsullied man the book presents.

If there is one element of Tolkien Jackson, Walsh and Boyens are not interested in, it’s Tolkien’s whimsy and idea of characters as paragons (or parAragorns). For the film, the conflicted Boromir is more interesting and sympathetic than goodie-two-shoes Faramir. By contrast, to Tolkien Faramir was an ideal and Boromir a shadow of the martial blowhards who led millions to death in the trenches. Tolkien wanted heroes who were more certain and perfect. The films are about the struggles people face with doing their duty, questioning their purpose. The films are not about questions of spiritualty and moral purity. Tolkien gives over long chapters to the spirituality of the Ents and one short one to Helm’s Deep – that balance is completely flipped here.

But the advantage is that the idea of true heroism being conquering your own doubts pays off hugely in the adaptation. Aragorn – a superb and hugely charismatic Viggo Mortensen, literally sweating heroism and poetic sensibility – has his character arc improved by the film. In the book, he has not doubt at all. The film establishes his reluctance to lead and unwillingness to acknowledge he is of men. From seeing only the weakness of men, he slowly identifies with them. It’s a conscious decision for him to fight at Helm’s Deep and the battle sees him finally accepting leadership. It’s a richness not found in the novel.

Of course, battles are more compelling on screen than the page. Helm’s Deep is perhaps the greatest battle on screen, a Kurosawa-inspired, rain-splatted masterpiece, perfectly mixing character beats and action. It never forgets that we care about people not action, so rarely more than thirty seconds go by without one of our heroes front-and-centre. Shots of refugees establish the stakes, the costs of war are laid shockingly bare and the battle is crammed full of awe-inspiring shots of mayhem and martial prowess. You can’t not be excited by this superbly choreographed epic, with just the right level of Jackson’s pulpish-gore background laid on.

But this is not just a film about a battle. As always, every beat is perfectly worked – even if the Ents material suffers from the reduced interest from the creative team. The opening sequence expanding the battle between Gandalf and the Balrog is jaw-dropping. The world of Rohan is created beautifully. Bernard Hill’s Theoden is plagued with self-doubt. Miranda Otto is very good as a woman who wants to prove her place in a man’s world (even if the hinted romantic sub plot between her and Aragorn feels a little forced).

But the biggest magic in the film, and its most special effect, might just be Gollum. While the computer wizardry to create the character is astounding, it works because the acting behind it is sublime. Serkis invented a whole school of acting in motion capture. The screenwriters expand the novel's conflicted psyche and explores even more the character's split personality – Gollum (the Ring dominated side) and Smeagol (the timid but dangerous side), both made distinctive by Serkis. Jackson’s most bravura scene might be one of his most simple, a two-shot argument between the two sides, that sees Serkis switch personality with each cut. It’s a superb combination of cinematic language and acting skill.

The Two Towers is superb film-making, with music, photography, editing and design all faultless. The acting is again brilliant – Wood, McKellen, Astin, Tyler as well as those mentioned above. But it’s also a brilliant adaptation of a novel, making changes to increase tension and drama and carefully selecting the elements that will work most effectively on screen. It’s closing battle is one for the ages, but the entire film is a perfectly paced epic, with a growing sense of danger and doom that ends on a beat of quiet hope. This series is a thing of beauty.