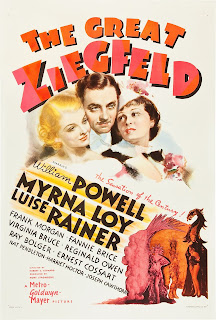 I’d always been led to believe The Great Ziegfeld was one of the low points in Best Picture history – that the Oscar had gone to a plotless, over-long, empty mess. So, watching this film for the first time, I was pleasantly surprised. The Great Ziegfeld may be flawed, but it’s not as bad as all that. In some places it’s even pretty good.

Florenz Ziegfeld Jnr (William Powell) is a showman with big dreams. From the Chicago World Fair of 1893, where his show features strong-man The Great Sandow (Nat Pendleton) – lifting a massive pair of dumb bells inside of each is a “Dumb Belle” (geddit?!) – Ziegfeld heads towards New York. There he puts on a series of variety shows, The Ziegfeld Follies, crammed with popular entertainers and gorgeous babes. Along the way he spends money like water, marries star Anna Held (Luise Rainer), cheats on her a lot (although the film handles this coyly) and finds love with star Billie Burke (Myrna Loy – the real Burke grudgingly agreed she was too old to play herself).

Watching The Great Ziegfeld you can see how it influenced so many later films. A witty, show-piece crammed crowd-pleaser about a impresario, its essentially the grandfather of The Greatest Showman. It’s unpretentious and easy-going – but also impossibly long, far too long for its slight story. It’s sprawling, puffed-up and the musical numbers are often mundane and tedious – but it, just about, manages to stay entertaining.

In real life Ziegfeld was a chancer with a roving eye. He left a mountain of debt and his genius was at least as much about promotion as it was art. You can see why Hollywood has a soft-spot for him: he was all about spectacle (a running gag has him always wanting “higher steps”, a neat short-hand for making things bigger). His rough edges (the affairs and the financial chicanery) are filed down as the film’s Ziegfeld is a charmer with a Wodehousian wit, cheeky and naughty but always a gentleman.

William Powell is perfect casting, and a big part of the film’s charm is tied up in his winningly (and deceptively) casual performance. Powell turns the role into a personality part, smoothly underplaying with a wink to the camera. He delivers the various bon mots with a real skill and provides nearly all the film’s pace and energy and a big barrel of its sense of fun.

He sits at the centre of a film that has genuine moments of directorial flair from Robert Z Leonard. There are some great tracking shots and he handles the ‘acting’ scenes very well – a scene with Ziegfeld chatting with Will Rogers and Fanny Brice (playing herself) is worth the price of admission alone. The performers mostly bounce effectively off each other.

Leonard also gets emotional impact from Ziegfeld’s late romance with Burke (a sequence of the two of them chatting, coyly holding hands is very well done) and creates a superb series of visuals to close the film (a shot of the ageing Ziegfeld sitting in his chair, staring at his name in lights over his theatre, is a wonderful summary of the man’s life – and maybe, when his hand drops down releasing a flower, it even gave Welles a bit of inspiration for Kane’s death five years later).

When The Great Ziegfeld focuses on Powell’s lightness of touch, and character-led moments (Frank Morgan is also great fun as Ziegfeld’s bombastic, long-suffering rival) it works really well. What has suffered over time – and today feel like its weakest parts – are those heavily praised in 1936. 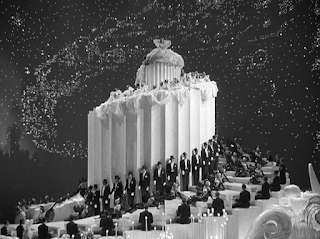 MGM marketed this as the most expensive film ever made, the money splurged on those massive musical numbers, with scores of extras and enormous sets. The centre-piece is the “A Pretty Girl is Like a Melody” number, featuring countless extras on a massive rotating “wedding-cake” set, 175 spiral steps high. Like Ziegfeld’s shows it’s all about the cost, spectacle and size. And they are not even 1% as interesting as watching Astaire and Rogers tap dance in a marquee in Top Hat.

The film’s numerous musical numbers often feel like dull products of yesteryear. Over-long, over-extended, shot to squeeze the set into frame rather than focusing on skill or grace. These numbers – some of which I admit I fast-forwarded through – pad out the running time but contribute nothing to either story or entertainment factor. If anything, you are desperate to get back to Powell’s skilled playing of the biographical scenes, rather than sitting through another over-ripe number.

Similarly much of the acting has aged less well. Myrna Loy is strangely uncomfortable as Burke (perhaps all to aware the real Burke was just off camera). Luise Rainer won the first of her two consecutive Oscars – but her performance is extremely over-played, utterly lacking in nuance. Her famous “telephone” scene (heartbroken, she calls Ziegfeld to congratulate him on his new marriage) was hailed as great acting, but today looks mannered and overblown.

But despite all these flaws – mundane and boring musical numbers, a lack of spark and pace – there is actually a fair bit of wit and charm. Its early sequences – which focus on Powell and Nat Pendleton’s witty turn as Sandow – are surprisingly light and engaging. The moments where the film relaxes and isn’t straining to impress are engaging and fun. There is a decent 90-minute Astaire-Rogers film straining to get out here, crushed under the weight of the Ziegfeld/MGM grandeur. It’s entertaining – better than you might have heard – but can’t hold a candle to the great Hollywood musicals of yesteryear, its charm spread very thin.