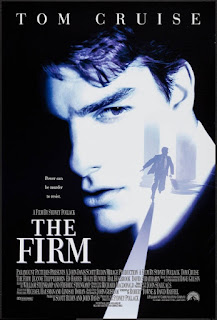 Mitch McDeere (Tom Cruise) is graduating top-of-his-class from Harvard Law. A plucky kid who’s worked for everything he has – and who wants to provide the best he can for wife Abby (Jeanne Tripplehorn) – Mitch has lots of offers but is seduced by a perk-filled offer from a law firm in Memphis. Everything goes wonderfully at first. But then associates at the firm start to die under suspicious circumstances and Mitch discovers no-one ever leaves the firm except in a wooden box. Maybe all that off-shore tax-dodging isn’t quite as innocent as it seems – and those big-city clients with Italian-sounding names aren’t so friendly after all…

Adapted from a best-selling novel by John Grisham at the height of his airport-novel flogging days, The Firm is bought to the screen by Sydney Pollack. And what a complete dog’s dinner he makes of it. The Firm is a dreadful film: long, slow and dull with a plot that stretches right through elaborate and comes out the other side as confusing. By the time Mitch is tearing through Memphis, briefcase flapping behind him, you’ll have long-since ceased caring about anything involved in the film at all. Because for a film of such great length, very little seems to happen in it – and what little does happen is wrapped up in a mixture of legalese and curiously flat chase sequences.

Cruise plays Mitch at his most gung-ho, cocky, shit-eating grinnish. He’s preppy, super-smart, arrogant but also loyal, brave and principled. Aside from a brief temptation by money – and that because he wants the best for his family! – and of course a dalliance with a honey-trap on a beach (but it was a set-up, so not his fault!), he’s practically perfect in every way. He’s even a decent athlete, playfully taking part in back-flipping competitions with a break-dancing pre-teen busker (one of the most clumsy and bizarre introductions of a Chekov’s skill in the movies).

To put it bluntly, Mitch is an irritating character and watching him (very slowly) decide to do the right thing doesn’t make gripping viewing. Around him a host of experienced character actors do their thing, none of them stretching themselves. Tripplehorn does her best with the thankless part of “wife”, though she does at least get to do something a little proactive at the end. Hackman grins and coasts as Cruise’s mentor with the lost conscience. Hunter pouts and wisecracks (Oscar-nominated) as Grisham’s twist on an Eve-Ardenish secretary. Holbrook and Brimley scowl behind smiles as high-ups at the Firm. Harris shouts a lot as a permanently angry FBI agent with a heart of gold. Sorvino breaks out his Mob Boss 101.

Pollack marshals all these forces together with minimal effort and then ticks the boxes of all Grisham-cliches. The only thing missing are some courtroom dynamics, but we get the next best thing with wee-Tommy playing the FBI, the Mafia and the Firm off against each other in a desperate attempt to stay one step ahead of the game. I can’t stress enough how turgid and dull this film is. However scintillating you feel the set-up you might be, as the film clocks into the second hour (with 30 minutes still to go), you’ll be amazed how little sense of peril or threat there is.

There is nothing sharp, pointed or pacey about this film. “It has to happen fast” Tom announces at one point, as he kicks his impenetrable plan into gear. “Good luck in this film” my wife commented. She’s spot-on. Pollack fails to bring any sense of pace or peril to the film. For all we are repeatedly told Cruise’s life is at risk, it never really feels like it.

A big part of this massive failure is the terrible musical score that covers every single second of the film. Provided by an Oscar-nominated Dave Grusin (beating out Michael Nyman’s score for The Piano from even being nominated, one of the most inexplicable oversights at the Oscars from the 90s), every single second of the film is overlaid with a plinky-plonky piano score that would not sound out of place in a second-rate jazz bar or a hotel lift. Rather than bring you to edge of your seat, the score actually makes you feel like you should be resting back in it with a large cocktail in hand and a fuzzy sense of upcoming sleepiness clouding your brain. Which to be honest might work: pissed and half-asleep is probably the only way to get anything from the movie.