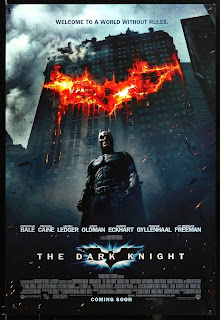 Christopher Nolan’s Batman Begins reset the table for superhero films. The Dark Knight took that table, picked it up, overturned it and rebuilt it from scratch. This influential film is certainly the greatest superhero film ever made and the calling card Nolan will carry for the rest of his life. Its exclusion from the 2008 Best Picture list at the Oscars (and Nolan’s snubbing for Best Director) was so widely condemned as snobbery (especially as the slot went to the atrocious awards-bait The Reader, a film even Oscar-host Hugh Jackman quipped he hadn’t seen) it led to the Oscars doubling the number of Best Picture Nominees (something benefiting several genre films inferior to this one). The Dark Knight declared forever superhero films could be proper films with characters, intriguing stories and interesting things to say.

It’s been a year or so since Bruce Wayne (Christian Bale) began his caped crusade as Batman, wiping out organised crime in the city. District Attorney Harvey Dent (Aaron Eckhart) – working closely with Bruce’s childhood sweetheart Rachael Dawes (Maggie Gyllenhaal) – has launched his own tough on crime crusade that has led to many mobsters landing behind bars. In the police force, Lt James Gordon (Gary Oldman – superb as a man whose good intentions lead to great harm) is straightening out the most bent police force on record. Now the gangs are desperate and in retreat – so desperate that they turn to the sort of dangerous, anarchic freak they would never usually countenance working with: a man known only as The Joker (Heath Ledger). The Joker though has his own plans for the city, for Batman and his own crazed ideas of social anarchy.

The Dark Knight is told on a huge scale: but Nolan never once loses sense of the fact this is an adventure film, while making sure that it explores ideas around society and humanity that leaves most high-brow films standing. Sumptuously made, a technical marvel it has set-pieces that stand with the greatest in cinema, dialogue that is crisp and brimming with intelligence and every performance in it excels. Nolan’s cinematic verve creates a film that always feels fresh.

It’s hard not to reflect on the film without remembering the tragic death of Heath Ledger. A controversial choice for the Joker – despite Brokeback Mountain he was seen by many as a lightweight actor – Ledger’s performance is astounding. He radically redefines the character, giving every scene an eerie edge somewhere between violence and black comedy. His Joker has the bowed head and animalistic prowling of a hyena (along with the laugh), a snake-like licking exploration of his facial wounds, a voice that switches from a deep baritone to a high-pitched giggle.

He’s dangerously, psychotically violent, with a dark, demonic delight in mayhem, a wickedness that is not funny so much as unsettlingly comic and an unpredictability laced with a sharp and intimidating intelligence. Ledger essentially redefined a character who had existed for decades. It’s an extraordinary performance, winning numerous awards, that stands as the definitive interpretation of the character as a scuzzy, streetwise hood with the willingness to do anything at all. 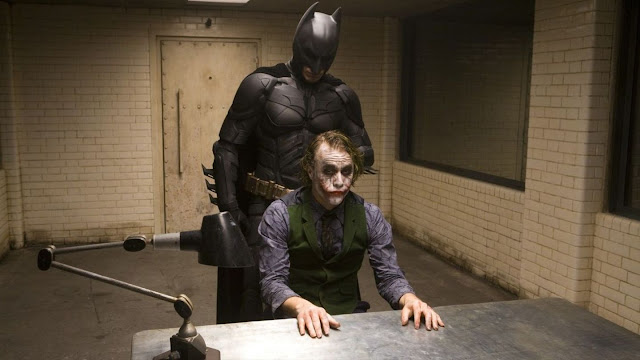 The Joker is the channel Nolan’s film uses to explore fascinating ideas around order and chaos, and the clash between anarchy and rules. Nolan understands that, for all his confused psyche - heading out to beat up criminals for his nightly activities – Batman is a bastion of law and order and moral righteousness. He’s a fiercely ordered and meticulous man, who plans several steps ahead of his enemies, holds rigidly to a moral code and has the confidence (arrogance?) to believe he is best placed to make the big calls for the many. They are personally traits he shares with all the films heroes: he, Gordon and Dent are all men who harvest long-term plans to deliver mass benefits.

Standing against them is their antithesis. The Joker believes principles are bunkum, with life motivated by randomness and selfishness. These are polar opposite theories of life being explored here – and the Joker’s plans (such as they are) are to show that mankind is, at heart, an awful, terrible thing that can only destroy. But the schemes of our heroes also smack of arrogance and control – a sense of almost divine certainty in their righteousness.

Basically, what we get here is a discussion on our fear of anarchy. Deep down we all like conspiracy theories, because it shows someone is in charge. Randomness is terrifying. We all like to feel there is an organising force behind events – no one wants to meet their end by the toss of coin. We feel comforted by being part of an overall plan – even if it’s a plan for our demise. The Joker’s power comes not from his skills in themselves, but his willingness to break all rules and destroy anything and anyone at any time for any reason. There is no protecting against this. And it’s terrifying.

Nolan introduces the concept – and the character’s warped way of thinking – from the very start. The stunning opening sequence features a bank heist (with a neat cameo from Heat veteran William Fichtner – a deliberate homage) where the Joker has devised a ragged, but brutal plan which involves each member of the gang offing each other in turn (not that they are aware of that!). It’s a blazingly, triumphantly cinematic opening and a brilliant entrée to Nolan’s superbly directed, engrossing film.

While juggling intelligent ideas it’s also a brilliant, edge-of-the-seat ride crammed with jaw-dropping set-pieces. Each of them is underpinned by that rich psychological clash. Bruce Wayne is trapped in tactics utterly unsuited for his opponent, his assumption that criminals are simple people motivated by greed. Even worse, the Joker delights in identifying the clear lines Batman won’t cross, and dances right across them, wiping out the psychological advantages that Batman has over other criminals: once the Joker establishes Batman will never kill him, he forever knows he has the upper-hand. 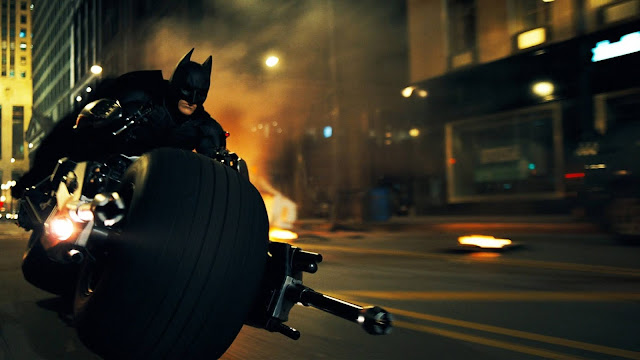 Bravely the film ends not with a bang, but a character-driven, personal three-way confrontation between its three heroes (Batman, Gordon and Dent), low-key but bubbling with resentments, fury and pain. It’s a perfect cap – and a capturing of the film’s argument that the greatest damage people like the Joker can cause is not to our property but to our souls.

It’s easy in all this to overlook Christian Bale, but he is wonderful as Wayne (and again this is a film that is as much, if not more, about Wayne than Batman). Increasingly distancing himself from people – his last links to human warmth being Alfred (Michael Caine, again in wonderful mentor form) and Rachel Dawes (re-cast to terrific effect with Maggie Gyllenhaal, who brings wonderful depth and complexity to the role) – Wayne carries a martyr complex, damaging to his psyche.

Nolan’s film is a dense and rich thematic exploration of chaos and certainty which expertly combines thills and actions with a character driven plot. Superbly acted, wonderfully paced, rich and intelligent – with a genre defining performance by Ledger – this is truly great film-making, one of the greatest blockbusters of all time.