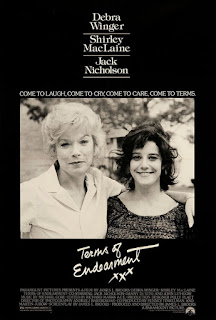 Spoilers: If you can spoil one of the most famous tear-jerkers of all time.

I think its fair to say 1983 was a weak year at the Oscars. The finest film of the year, Ingmar Bergman’s Fanny and Alexander, was a four-hour Swedish saga (and arguably a TV series anyway), wasn’t nominated. The most lasting films of the year, Flashdance, Scarface, War Games and Return of the Jedi, were never Oscar bait. Terms of Endearment motored through to hoover up five Oscars – beating out The Big Chill (cut from a similar soapy cloth), The Dresser (a British stage adaptation), The Right Stuff (a slightly cold Mercury programme saga box office flop) and Tender Mercies (a low-key character drama about a Country-and-Western singer that won Robert Duvall an Oscar). By any measure that’s not a list for the ages.

And Terms of Endearment had the added bonus of being the second biggest hit of the year, after Jedi (yes, I know!). It’s a surprise, as this sort of female led drama rarely scoops the big prize – so at least it makes a pleasant change. Terms spools out a collage of scenes (there are sometimes time jumps of years between scenes), chronicling the lives of over-protective, domineering mother-and-free-spirit Aurora (Shirley MacLaine) and her daughter, defiant, at times highly-strung, Emma (Debra Winger). The two have a difficult, though loving relationship, often depending on each other for emotional support – especially in their relationships: Emma’s with feckless philandering English Professor ‘Flap’ Horton (Jeff Daniels) and Aurora’s with playboy retired astronaut Garrett Breedlove (Jack Nicholson). But both come together when tragedy and illness strike.

Watching Terms of Endearment today, it’s often hard to see what the fuss was about. Although it wasn’t the first film to jerk tears via last-act illness (see Love Story), this started a wave of films where illness to a key member of the family (usually a mother) has a devastating, tear-jerking (but often eventually heart-warming) effect on the rest of the family (especially young children). Terms of Endearment probably does this better than those that followed, but watching it today its hard not to see it as something a little more familiar than it might have felt at the time.

Brooks’ background was in TV (he had several successful shows on his resume, from The Mary Taylor Moore Show to Taxi – so he certainly knew what the masses liked) and this, his first film, often feels like a cut-down mini-series. It matches exactly the sort of soapy, family saga of several TV epics of the time, and Brooks shoots the film with an unfussy, visually flat series of TV angles (aside from his skill with actors, his directing Oscar is a travesty). With each scene effectively standing alone – its collage effect means the film covers at least 14 years minimum with often only the age of the children any indication that time has passed – it also has a slightly bitty air of something assembled for cutting into episodes or advert breaks. 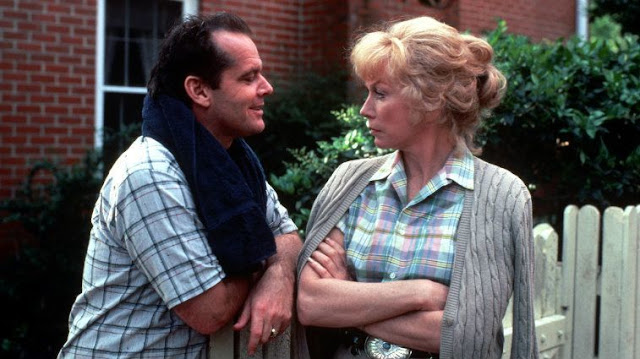 Not that there is anything particularly wrong with this. But, it does mean the film feels like it meanders along through a series of small crises, designed to be easily digestible. The film has a whimsical lack of directness – not helped by its overbearing (and dated) musical score. It relies strongly on sparky dialogue delivered by a cast who all look like they are having a good time (although, allegedly, they really weren’t with Winger and MacLaine in particular barely on speaking terms when the cameras weren’t rolling).

The main dramas are romantic. Aurora doesn't quite know how to respond to her feelings for gnarled playboy Garrett. An early date between them hilariously contrasts her ludicrously over-formal clothes and his scruffy indifference. Its a difficult dance between two people who, for various reasons, are scared of commitment. But then Emma has made her own mistakes. She's married Flip (is there a worse name in cinema?) for independence, but really they have nothing in common - and Flip's eye quickly goes roving. Emma responds in a way her mother would understand: a potentially 'first strike' affair with John Lithgow's meek bank manager (Lithgow and Winger have a wonderful scene at a diner, where he is almost too scared to touch her hand). You can see both mother and daughter teeing themselves up to make the same mistakes: the generations never learn from each other.

At the heart of the film is the mother-daughter relationship. But for me, this often lacks focus and never really coalesces into something that feels real or emotionally coherent. Now you could say that’s like life – and that’s a fair point – but several of the events feel heightened (particularly those featuring Aurora) and the characters are mutually dependent when the story demands it, and barely in touch when the opposite is needed. It’s easy to feel some connecting thread is being lost in those massive time-jumps. I found it hard to escape the feeling several times that people behave like this in the movies but never in real life.

But then, you get the final thirty minutes which revolves around the cancer diagnosis and eventual death of Debra Winger’s character. Here is where Brook’s flat, unobtrusive style comes into its own, his simple, restrained staging of these scenes making them surprisingly moving and affecting – especially considering the artificiality of some of what we’ve seen so far. For the first time, emotion, truth and earnestness – without too much blatant heart-string tugging – comes into play, and these simple scenes of two mothers saying goodbye to their children and each other end up having real emotional impact – as do the slightly stunned scenes of grief of those left behind.

It’s a shame then that most of the rest of the film before that doesn’t quite connect with me. The film was festooned with Oscars, but naturally the person most responsible for it working – Debra Winger – missed out. Winger is superb here, the only character who feels genuinely true, tender and also flawed in natural ways. She is slightly impulsive but also frightened of change, a character who can shout and rage but also is weak and dependent on emotional bonds. She’s totally believable and I would have loved to see more on her troubled relationships with her kids, and how her eccentric mother has impacted her ability to form bonds with her kids. The film doesn’t go there.

The Oscar went through to Shirley MacLaine who gives a big, showy performance as Aurora – and nabs the “Oscar Clip” moment as she bellows at nurses to give her daughter her medication. MacLaine’s Aurora never for one moment feels like a real person, but instead a novelistic invention of an eccentric mother, thrown on screen. MacLaine plays her to the hilt, but it’s a performance that feels mannered. But she gets the film’s fun moments – and gets to spark off Jack Nicholson who coasted to another Oscar as the sort of horny scoundrel he would play again and again for the much of the next thirty years on screen.

Terms of Endearment has enough in it that, if you like this sort of thing, you’ll love it. Perhaps it does mean more to mothers-and-daughters. I found it at times overly twee and laboured. But I can forgive it a fair bit for how effectively it displays grief – and how brilliant Debra Winger is in it. Over honoured? Sure. But, for its genre, a high point.