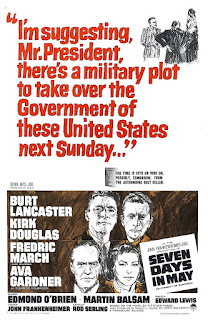 President Jordan Lynman (Fredric March) has completed his signature policy: a nuclear disarmament treatment with the USSR. Some are thrilled, others are horrified. In the latter camp are the Joint Chiefs of Staff, none more so than chairman General James Mattoon Scott (Burt Lancaster). General Scott has a plan: a coup to be launched in seven days time, during a training op. But word leaks to his assistant Colonel Casey (Kirk Douglas) who, however much he admires Scott, won’t be party to treason. Casey warns the President – and a race against time begins to stop the coup.

Seven Days in May opens with documentary style footage of clashing crowds outside the White House (one pushing for peace, the other for war) and then carefully balances that style with an unsettling sense of paranoia throughout. People suddenly disappear (once from frame to frame), most of the action takes place in confined spaces. When characters do head outside, they constantly seem to be looking over their shoulder, with the camera watching like a distant observer. The lack of music all adds the eerie feeling that this could just happen.

And, of course you, feel it could. Because we’ve not lost a tingling sense of unease at an over-powerful military. It’s a shame therefore that Seven Days in May doesn’t grip quite as much as it should. I think a large part of that is because the plot is exposed very early – and when Casey goes to the authorities with his suspicions, they are instantly acted on. Thrillers like this often work best with a “one man stands alone” vibe – it’s missing here, and instead we get the President and the cabinet laboriously investigating different elements of this conspiracy looking to turn up enough evidence to prevent the coup before it starts.

The drop in tension could have been counter-balanced if the film had more successfully explored the conflicts and contradictions in America. This is after all a country priding itself as being the home of freedom and democracy – but since George Washington, has had a fondness for installing military men in a job role pointedly called “Commander-in-Chief”. This is a film that could have explored how different parts of American society might admire either an Adlai-Stevenson-style intellectual or a blood-and-guts ‘simple’ soldier. But the film dodges this – and works hard to stress both men act within what they define as honour and the needs of the country. The film is to nervous about any suggestion that Scott’s coup could lead to a proto-dictator vetoing the electorate.

There is also a naivety about the film. A long subplot (not particularly interesting) features Casey being side-lined into uncovering evidence of Scott’s long-term affair. Ava Gardner does her best with a largely thankless part as the woman in question, but there is a touching faith that evidence of this will be enough to destroy Scott. It’s a faith in the system: while the public might be shaken slightly in their belief that Scott is like King Arthur reborn, finding out he’s actually Lancelot is hardly going to weaken his hold over many of his followers – or his military machine.  For a conspiracy film, Seven Days believes conspiracies are a relatively simple matter to defeat.

What’s best about the film – not surprisingly since it’s largely a chamber piece – is the strength of the acting. Produced by Douglas (who generously cast himself in the most thankless role as the decent-but-dull Casey), a cast of stars was assembled. Lancaster was perhaps the only choice as the holier-than-thou Scott, arrogant, morally-superior, cold, distant but capable of inspiring immense loyalty – it’s the perfect role for him and he plays it to the hilt.

The film’s finest sequence is a late confrontation between Scott – Lancaster oozing moral superiority and unhidden contempt – and Fredric March’s intellectual President. March is brilliant, a born negotiator and compromiser – all the skills you need to be a successful politician – with just the right edge of irritation, arrogance and pride for you to know that, even if he is right, he’s no saint. March also gives Lyman an old-school sense of honour and moral principle that makes him unable to cross lines Scott can leave behind him, while still be jittery and waspish to colleagues and friends.

Filling out the cast, O’Brien gives a wonderful (Oscar-nominated) turn as a hard-drinking, good-old-boy Senator who turns out to have principles of iron and the guts to match. Martin Balsam delivers one of his patented put-upon functionaries, struggling to keep stress at bay. Macready is great value as a bombastic cabinet member while Houseman glides above it all as an Admiral to smart to say anything certain either way.

Acting is eventually what powers Seven Days in May and if it never becomes the white-knuckle conspiracy thriller or the insightful political commentary it should be, it just about has enough entertaining scenes to keep you watching.