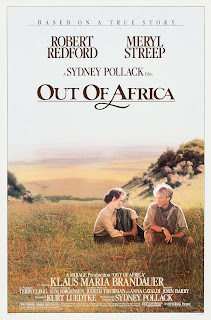 In the 1980s Hollywood faced an identity crisis. Throughout the 1970s, the films the Oscars honoured and those that topped the box office were often one and the same. The industry saw itself as the purveyor of classy, intelligent, popular entertainment. But in the 1980s, people flocked to see the latest Rocky or Rambo film, instead of the likes of Kramer vs Kramer. Hollywood wanted to carry on feeling good about itself: so it honoured as “Best Picture” the sort of sumptuous, prestige products it wanted to shout from the rooftops about, even if people weren’t flocking to see them at the cinema in the same way. So something as mundane, average, tasteful and empty as Out of Africa hoovered up eight Oscars.

Based on Karen Blixen’s memoir of her 17 years (from 1913) owning and running a coffee farm among the British community in Kenya, the film reorganises a deliberately non-linear memoir (full of impressions and reflections, thematically arranged) into a simpler narrative, and throws in content from at least two biographies of Blixen (played by Meryl Streep). As such, the film charts her life, specifically her relationship with philandering and unreliable husband Bror (Klaus Maria Brandauer) and love affair with British game-hunter Denys Finch Hatton (Robert Redford).

Pollack directs this epic with a clean, smooth, professional and lifeless tastefulness that makes it a long film full of pretty things, but a fundamentally empty experience. At the film’s conclusion, Karen is invited into the Men Only club for a drink where she is toasted. It feels like it should be the culmination of plot threads running throughout the film. But instead, its under-explored and unfocused, struggling for any attention. Rather than a culmination of a nearly three-hour experience, the moment feels unearned.

That’s about par for the course for a film ticking all the boxes of “prestige” movie making, but which tells us nothing at all. It’s clear Pollack has only a limited understanding of the intricate rules of the British upper-class community. We learn nothing about Africa, or the role of Empire there or the impact this had on the Kenyan people. Instead, the Kenyan people are seen as exotics or charming superstitious eccentrics.

The film is only interested in how beautiful colonial Britain was – the lovely clothes, the sumptuous set-design, the detailed props – and the gorgeous scenery. There is some focus given to the Kenyans – particularly Karen’s relationship with her servant Farah, very well played by a stern but wise Malick Bowens – but it is always defined as Karen visiting them, encouraging their education and pleading for their rights. There is more than a touch of the white saviour, and the film fails to really give us a sense of Karen gaining an understanding of the Kenyan people on their own terms, rather than hers.

That might be because the film is determined to turn the story into a straight-forward romance, giving most of its focus to Karen’s relationship with Denys. This is the root cause of most of the film’s problems, as Pollack casts two fundamentally unconnected actors. Streep gives a performance of such technical detail, you find yourself admiring the work while never really connecting with the character. Her Danish accent is perfectly studied, she has clearly read everything on Blixen she can find, and every single beat is perfectly observed. You can’t miss she is acting in every frame: there is nothing relaxed or truly intimate in the performance. It’s the work of a master craftsman.

This detailed excellence literally feels like it is happening in a different movie to the one Redford is in. Redford looks like he just stepped off the plane and started shooting. Pollack was convinced no English actor could play Denys in the sweeping romance he had in mind (Charles Dance anyone? Michael Kitchen – very good as Denys’ best friend – is far closer to what the part actually required, and would have been excellent). Redford was parachuted in and encouraged to play the role with his natural accent (is he still meant to be British? No idea).

The two performances never click together, and Redford’s Californian approach feels totally wrong for the Houseman-quoting, Mozart-playing, Great White Hunter he is meant to be. Not for one second can you forget this is the Sundance Kid – making it nearly impossible to buy into this relationship the film is trying to sell you, as well as making Streep’s Danish accent sound out of place (I mean why is she going to so much trouble when Redford can’t be arsed?).

All the romantic hair washing in the world can’t make these two stop being a chemistry free, jarring couple. Take away the sort of epic romance the film needs – the sort of thing The English Patient would do so right 11 years later – and all you really have left are two handsome actors in a very picturesque setting. Out of Africa looks lovely – but in a National Geographic way. The African Plains look wonderful, you’d have to do a poor job to make them look bad. Really the film is visually dull.

Pollack’s limitations as a director are revealed – he can’t give this the sweep and sense of the epic it needs and he can’t find depth in this canvas. Instead, everything is painted in the broadest brush strokes and any sense of romance it gets is from John Barry’s exquisite, luscious score. The film crams in as many shots of Africa as possible – but is bored witless by the story-telling and poetry that are supposed to be at the heart of Denys and Karen’s relationship. It rips the heart out of these two characters and their romance.

Out of Africa won all those Oscars – but feels like a box-tick exercise. Like the voters just thought everything in it must have been Oscar-worthy. 1985 was a poor year for movies – perhaps only Ran, Brazil and Back to the Future have really grown in stature – but Out of Africa feels like the emptiest, least interesting, least effective prestige picture that ever scooped the Oscar. Nothing sticks in the memory – other than the repeated “I had a farm in Africa” line in Streep’s tongue rolling accent. Kitchen, Suzanne Hamilton and Brandaurer (charming and likeable as Blixen’s husband, despite playing a complete shit) are good, but nearly nothing else really works beneath its surface impact. Middle-brow, tasteful and pointless.