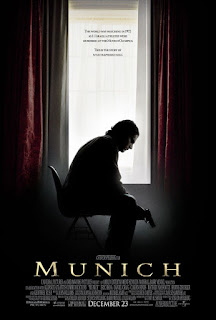 At the 1972 Munich Summer Olympics, 11 members of the Israeli Olympic team were murdered by a Palestinian terrorist cell, Black September. The world was shocked and appalled. Israel responded with a hard-line anti-terrorist campaign, that saw Mossad teams traversing the globe, assassinating Palestinian leaders involved with Black September. They learned not only was terrorism a hydra, but that the moral high-ground erodes quickly when the shooting starts. Can terrorism be defeated by violence? Munich argues not: instead suggesting violence is a beast that feeds itself – an argument that, in 2005 in the fourth year of the War on Terror (the film ends with a shot of the World Trade Centre) was increasingly relevant to another country, traumatised by the slaughter of innocents.

Adapted by Tony Kurshner and Eric Roth, it’s based on a book Vengeance by George Jones about the man who claimed to be the leader of the Mossad cell (whether that is true or not is debated). He’s fictionalised here (to side-step that issue) as Avner Kaufman (Eric Bana). His team consists of driver Steve (Daniel Craig), explosives expert Robert (Mathieu Kassovitz), forger Hans (Hanns Zischler) and clean-up man Carl (Ciarán Hinds) with Ephraim (Geoffrey Rush) as their handler. The team hunt down and eliminate their targets – but as the mission goes on they pay a heavy cost, both in their eroding of their own moral certainties and in blood as they become targets for repercussions.

Spielberg’s film is his least flashy, least sentimental and (I suppose) most mature film, a cold-eyed, even-handed look at the Middle East conflict that acknowledges faults and consequences on all sides, draped in the muted colours and bleached out photography of 1970s conspiracy thrillers. It’s also a very long and very self-consciously important film, that makes mis-steps and at times is crudely obvious as well as being more interested in posing questions than presenting any answers. Where it is at its best, is demonstrating how campaigns like this are tasks worth of Sisyphus.

Munich takes a long, hard look at the cost of violence – both on its victims and its perpetrators. Death in this film is slow, painful and frequently disturbing. Shot people stagger and slump in drunken shock, dying slowly. Bomb victims are ripped apart, recognisable limps left hanging from walls and ceilings. Machine gun bursts tear bodies apart. The cost of inflicting this violence leaves increasingly deep psychological violence on the team (we don’t get to see if it does on the Palestinians, a limit to the films even handedness), as it becomes harder and harder to treat those they kill as faceless monsters, rather than men with families of their own.

Spielberg reconstructs the horror of the killings in Munich with a documentary realism, not shying away from the horror. It follows the appalling opening moments of the attack, with the athletes taken hostage and the shocked world media reaction. Spielberg returns later in the film to restage the final murder of the athletes at the Munich airport with sickening detail (perhaps too much – but more of this scene later).

Showing the impact of violence from both sides, Munich strains at always being even-handed (despite this both sides attacked it for bias). It’s an Israeli story so we mostly see the psychological impact of carrying out the violence on the Israeli team, and little of the Palestinian perspective. But the film throws in a chance meeting between Avner and what-could-be his Palestinian equivalent, where Avner is brutally told that, when fighting for their home, the Palestinians will never give up, and consider any price worth paying – attitudes he can’t help but recognise as he fights for his own home. The film has clear sympathy with the sufferings of the Jewish people, and their need for a home of their own – but wonders if this is the right way to defend it. Spielberg is a friend to Israel – but wants to be an honest one.

What starts out as clear and simple (a campaign against terror) becomes morally complex. The team’s first targets are sympathetic, family men. When Avner talks to a later bomb victim, he’s friendly and welcoming. A Palestinian cell they (accidentally or maliciously) end up sharing a safe house with, thanks to their mutual French contacts, are surprisingly relatable. The mission’s accomplishments are unclear – the targets are killed, but all that happens is more people take their place. Worse, those that do are only more infuriated by the campaign of violence.

That’s the question – how do you fight terrorism? It breeds on a belief of injustice and persecution – and Spielberg’s film suggests, all the campaign does is pour petrol on that fire. Avner becomes a paranoid psychological wreck by the end of the film, plagued with a loss of moral certainty. The film argues that the only result of all this has been the price he and other have made – an end to the violence is further away than it was at the operation’s beginning.

Spielberg’s film is strong on showing the pointlessness of this campaign. What it’s less strong on is answers. In many ways, the film boils down to a simple “deep down we are all the same, why don’t we just get along” message. While handsomely filmed and daring in its questioning about the futility of anti-terrorist (and indeed terrorist) action, it’s a simplistic film, largely lacking nuance. The characters are ciphers – Bana, for all his skill, plays a shell of a character, designed to make statements, who is alternately ruthless or questioning as the plot demands. Because the film strives so hard to remain even-handed, it brings little to the table itself in terms of proposed solutions, merely focusing on telling us what we know: an eye for an eye eventually makes his all blind.

It’s also a film that has more than its fair share of clumsy mis-steps. It’s view of the world is picture post-card in is simplicity. First thing we see in Paris, is a shot of the Eiffel Tower. Go to London and it rains. First shot in Holland is our characters on bikes. Its characters are largely plot devices, well played but rarely fleshed out in people who feel like human beings, more like mouthpieces to express viewpoints.

Most atrocious of all, the film concludes with a penultimate sequence staggering in its misjudgement. Retired and living in America, Avner makes focused, vigorous love to his wife intercut with the showing of the final deaths of the athletes in brutal detail. It’s tasteless, ill-judged and horrendously unclear. I suppose we are meant to think Avner is purging himself of his burden of guilt – but the scene is so appallingly done, so grossly detailed it comes across as both offensive and insultingly twee in using the deaths of real people (staged in detail) to help our lead character feel better about himself. When Spielberg does sex, he invariably gets it wrong – and does again here.

Munich is a very worthy film, but it’s too-long, dramatically simple, for all its daring commentary on the war on terror. It’s well-acted – Michael Lonsdale and Matthieu Almaric are very good as Avner’s French contacts, while Hinds is a stand-out among the team – but the characters are ill-formed and the entire film takes a very long time to make a very simple point. Well-made but a film trying a little too hard to always be profound.