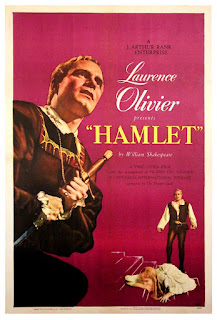 Close your eyes and picture Hamlet – chances are you will see an image inspired by Olivier. Olivier’s second Shakespearean directing outing coated him in plaudits. He became the only actor to win an Oscar for Shakespeare (and, until Roberto Benigni, the only actor to direct himself to an Oscar) and the film itself became the first non-American film to win Best Picture. Hamlet will live forever, a corner-stone production of the play and a part of Shakespearean and cinematic history. It skilfully weaves together theatre and cinema and still works as a cracking production of the play.

To bring it to the screen, Olivier made some big call. Smaller parts were cut to ribbons (particularly the Player King) or in many cases (I’m looking at you Rosencrantz and Guildenstern) excised all together. Over half the dialogue cut, with the focus being bought onto domestic tragedy (the politics of Fortinbras is never mentioned). This is a family tragedy, and a Hamlet-centric production, where Claudius is a jovial villain and Gertrude a mother with confused feelings for her son.

Oliver set this in a sprawling medieval castle using the best elements of theatre and cinema. The sets are beautifully constructed: winding corridors, towering halls and imperious battlements provide the sort of realist set Olivier could only dream of in the theatre. But Olivier (and photographer Desmond Dickinson), lights this with the moody intensity of film noir. Shadows dominate the castle and the frame, frequently provide hiding places. Olivier’s debt to Wyler (and Welles) can be seen in his pictorial framing and use of deep focus, while domestic tragedy in a grand house has more than a few calls backs to Hitchcock’s Rebecca. Frequently shots show an actor in the foreground, being observed in long shot by a second actor in perfect focus.

It also takes inspiration from expressionist cinema, especially in its mist-laden battlements, with some neatly surreal touches. The Ghost (whose voice, heavily distorted, is also Olivier’s) is a shadowy demonic figure, emerging shrouded in mist. A wonderful series of shots sees the camera seem to soar away from the throne room steps where Ophelia weeps, through the castle towers, into the sky and then down towards Hamlet staring at the waves at the foot of the cliff, passing through his skull where the image of the crashing waves is overlaid across the interior of Hamlet’s skull. It’s a more effective use of visuals than the film gets credit for.

For all its traditional trimmings – cod-pieces and men-in-tights abound – it’s easy to forget how influential this was. It cemented for years a view of Hamlet as a man wracked by indecision and made it standard to see Gertrude and Hamlet locked in Freudian-inspired Oedipal lust. The first idea came from the opening narration’s reductive phrase “This is a tragedy of a man who could not make up his mind”. It’s an odd statement to make – especially as Olivier’s Hamlet hardly seems wracked by indecision – but it matched a perception of the play so, true or not, it stuck.

That relationship between Hamlet and Gertrude adds a perverted romantic twist to the bedroom scene between the two (you can sense the inspiration of Wyler’s Wuthering Heights), with the film frequently framing the encounter with romantic angles. Eileen Herlie, for all the unflattering make-up and filming, looks all too much like Hamlet’s contemporary rather than mother (Herlie was in fact nearly 12 years younger than Olivier). While the scene does have a little too much heavy-breathing – and Olivier overplays the heart-beat soundtrack as white noise – it’s an effectively unsettling balance of intimacy and incest. It also runs through the production – from Gertrude kissing Hamlet on the lips, to her conscious decision to drink the poison and protect Hamlet.

The production – partly driven by cuts – is fiercely Hamlet-centric. Olivier speaks most of the dialogue (all of Olivier’s films revolve around massive star-roles for himself, fitting his competitive dominance). His Hamlet is beautifully thoughtful, but also dynamic and energetic (not much doubt there). Olivier perfectly captures the intellectual, as well as the humanity, grace and charm. Some of the nuance of the soliloquies is lost by Olivier’s decision to deliver them in voice-over (although Olivier does a good job reacting along to the narration) – but fortunately “To Be or Not To Be” and his speech on Yorick’s skull remain delivered ‘live’, and coated in emotional honesty. 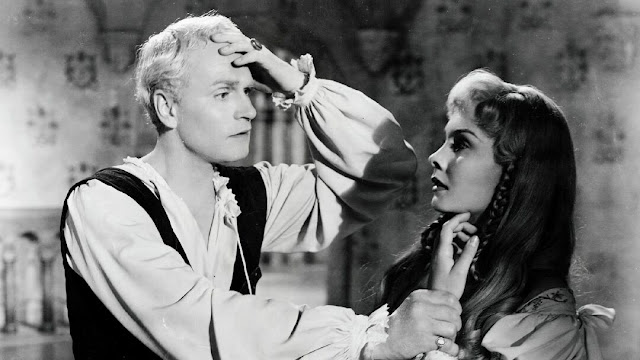 The rest of the cast are relegated. Sydney’s Claudius is little more than a scowling villain, Herlie has little presence. Norman Wooland makes a great deal of the loyal Horatio (a famously dull role), while Peter Cushing adds some comic energy as a foppish Osric. The best non-Hamlet moments go to Polonius and his children: Aylmer is the portrait of a doddering interferer nowhere near as smart as he thinks he is, while Morgan has a matinee idol energy as Laertes. Best of all is Jean Simmons, wonderfully heart-felt and fragile as Ophelia, whose gentleness dooms her.

Olivier might give himself most the best moments, but he allows plenty of directorial flourish elsewhere. There is a wonderful shot at Yorick’s tomb, where Hamlet’s shadow is cast over the skull, the skull seeming to become the shadow’s head. While a crane shot during Claudius-Laertes scheming is unwisely used twice in quick succession (more likely to raise chuckles), there is an impressive amount of camera movement and tracking shots. The production ends with a knock-out sword fight – and of course only Olivier would cap that with a life-and-limb risking dive from a platform. Olivier’s charisma is used brilliantly in these scenes, and while it’s not always quite clear emotionally what Hamlet is considering in these moments, his forceful presence drives the action and adds great weight to his final speech.

Because, this isn’t a film about a man not making up his mind. Sure, he’s a thinker – and one of the final shots brings us back to Hamlet’s chair, now empty – but when action is needed, this Hamlet grabs it. Just as Olivier grabbed the tools of cinema to create a production of the play that feels like a film. Some critics at the time were horrified that Hamlet should even be in the crude medium of film (Olivier took to calling it an “essay” on Hamlet) but today it stands quite rightly as both a great film and a key example of how to bring Shakespeare to the screen.