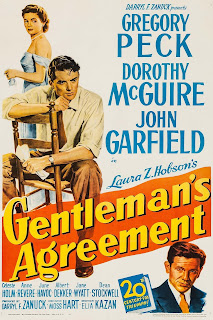 What was daring 60 years ago, often seems tame today. In 1947, Gentleman’s Agreement, an expose of anti-Semitism in America, was a potential career-ending risk for its stars. It won three Oscars, including the Big One (beating the similarly themed Crossfire, an anti-Semitic murder mystery – and better, more entertaining film). Today, Gentleman’s Agreement seems like a time capsule on celluloid: extremely earnest Hollywood movie-making at its most socially responsible – and only scratches the surface of prejudice and its dangers, capping everything with a neat happy ending.

Journalist Philip Schuyler Green (Gregory Peck) is commissioned to write a series of expose pieces on anti-Semitism. His editor doesn’t want the “cold facts”, he wants the sort of unique “angle” that’s Green’s specialism. Phil decides to pass himself off as a Jew so he can find out what it’s really like. Only Phil’s fiancée Kathy (Dorothy McGuire) will know the truth. Phil finds out first-hand the knee-jerk prejudice and barriers Jews in New York face – something hammered home as he begins to relate to the experiences of his Jewish school-friend-turned-war-hero Dave Goldman (John Garfield). Phil starts to realise even Kathy may talk the talk of opposing prejudice, but doesn’t always walk the walk.

Gentleman’s Agreement is an extraordinarily earnest piece of film-making, that doesn’t just wear its liberal heart on its sleeve, it stretches it across its entire shirt. The plot frequently halts for someone to deliver a set-piece speech on the evils of prejudice, and Phil’s son (well played by a young Dean Stockwell) serves as an audience surrogate for Peck to fill us in on how prejudice is the enemy-within. There is no doubting, watching the film, everyone passionately believes in its importance (Garfield, a Jew born in Brooklyn, took a huge pay cut to be involved). It’s just a shame that the film itself is to flat, overburdened by its own sense of importance.

It’s as least as interesting for what it doesn’t say. There is something damning about the fact Hollywood only felt comfortable making films about anti-Semitism after the Holocaust. A Jewish character objects to the Phil’s article with the standard line used by Hollywood Jewish studio owners – drawing attention to it only makes the problem worse (remember all references to Jewishness was removed from The Life of Emile Zola). Additionally, there are only passing references (if that) to sexism or any other form of racism or prejudice, and virtually every character we see is white, WASPY and middle-class. Hollywood could only handle one prejudice at a time, apparently.

Gentleman’s Agreement is strong on the everyday nature of prejudice – off-hand remarks about money and facial characteristics, a character protesting “that some of my best friends…” and so on. But, considering it was made in the shadow of one of the worst racially-motivated atrocities in history (the closest reference to the Holocaust is Peck refering to anti-Semitism being not just happening “far away in some dark place with low-class morons”), the film could (and should) have gone further on the dangers of prejudice. Saying that, this was still a big step for Hollywood. And while the film frequently appears preachy, po-faced and stodgy today, it was still a brave piece of film-making, even if it’s gingerly taking kid-steps towards confronting a problem.

Phil’s investigation of anti-Semitism is unfocused and vague. He speaks to only three Jews – a schoolfriend, an atheist Einstein figure (played by Sam Jaffe) he bumps into at a dinner party, and a secretary ashamed of her heritage who despises “the wrong sort” of Jew. Never once do we see him go to a Synagogue, visit a Jewish community or step outside the bounds of his world of country clubs, posh hotels and gated communities. The story may be about how prejudice exists in places we wouldn’t expect, but a film on anti-Jewish prejudice really should have a place in it for more than this, rather than Jewishness being a label Phil puts on and shrugs off later with a “ta da, gotcha!”

The film’s heart is in showing how “someone like us” could be prejudiced, sometimes without even realising it. Phil’s fiancée Kathy (a decent performance in a thankless part by Dorothy McGuire) turns out to have more than a few anti-Semitic bones in her body. Kathy is the classic liberal, believing every word of her own press about equal opportunities, while quietly urging people to fit in and be like her (gentile) friends. The film slowly exposes Kathy’s subconscious unease, her willingness to accept certain inequalities to avoid confronting the status quo. Watching today, it’s hard not to see Kathy as a pretty dreadful, hypocritical person. But while Gentleman’s Agreement wants to shake us, it still wants a happy ending – so she repents and learns her lesson.

It’s a shame, as this rather dull love plot is the film’s weakest thread. Far more interesting would have been seeing Phil actually out in the real world (Kazan’s immersive location shooting, which he used for Panicon the Streets and On the Waterfront, would have improved this film ten-fold). It’s also unfortunate Phil’s colleague Anne (played with Oscar-winning charisma by Celeste Holm) not only seems better suited to Phil, but a much nicer, braver person – it’s hard not to watch the whole film rooting for Phil to dump the tiresome Kathy for the engaging Anne.

Gentleman’s Agreement’s study of prejudice seems very tame, but its heart is in the right place. For even tackling the issue it deserves praise, even if it’s rather stunted dramatically. Kazan’s direction is as earnest (and at times lifeless) as the film, but he does fine work with actors. Peck is at his most morally certain, with a great sense of affronted liberalism, McGuire is very good, Garfield wonderfully humane, Holm marvellous, Anne Revere excellent as Phil’s drily witty mum. A braver film could (and should) have been made – and Crossfire makes all the same points, but quicker and with a lot more dramatic interest. Gentleman’s Agreement sometimes feels like a rather self-important bore at a dinner party, but at least you know it has conviction and means well.