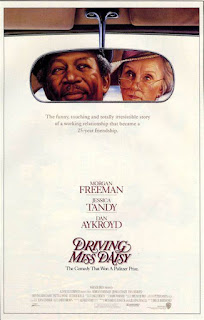 Retired Jewish teacher Daisy Wethan (Jessica Tandy) crashes her car while trying to drive down to the store. Her wealthy businessman son Boolie (Dan Aykroyd) decides she’s too old to drive herself, so hires black chauffeur Hoke Colburn (Morgan Freeman) for the job of Driving Miss Daisy. At first Daisy resists this new servant in her life but, doncha know it, over the next 23 years the two of them grow closer together as they deal with the ups-and-downs of life and find out that, heck, under the surface maybe we are all more alike than we think.

It’s been a recurrent theme that some films (like Shakespearein Love or The Greatest Show on Earth) have found themselves actually diminished by the burden of being an “Oscar Winning Film”. Driving Miss Daisy joins them, an impossibly slight little puff of air film which could be blown away by the faintest breeze. It won out in a year where the most exciting movies of the year (sex, lies and videotape and most strikingly of all Do the Right Thing) failed to get nominated. It seemed a particular slap in the face that a film which looks at racial relations with such a cozy, nostalgic view as this one should triumph in the year Spike Lee made a film that exposed how close America was to racial tensions erupting into violence (worst of all this wouldn’t be the last time for Lee).

Driving Miss Daisy wants no part of that though. This is the Downton Abbey of racial dramas, a nostalgic and overwhelmingly “nice” film that uses odd-couple drama to make us feel good about ourselves. In this vision of the south, the Whites (and I am not buying the film’s pained attempts to suggest anti-Semitic mutters here and there is on a par with lynching) are mostly paternalistic masters, and the blacks forelock tugging servants hoping for a better life but grateful for the support of their betters. There isn’t a single black character (bar Hoke’s niece who appears wordlessly in the final minutes of the film) who isn’t a domestic servant, and not a single white person who isn’t genteel (bar a single racist cop 52 minutes into the film).

Not a single black character is ever angry, complains about injustice or is anything less than patient, noble and humble. It’s all part of a film designed to make us feel better about the South’s appalling record of racism and segregation by presenting it as exactly the sort of genteel Gone-with-the-Wind-good-old-cause fantasy many people remain comfortable with today, where black people needed to be looked after because (as even Daisy puts it in the film) they are basically children.

Now saying that, the film is of course light, fluffy, inoffensive and (there is no better word for it) nice. You can sit down and let the gentleness wash over you, no problem at all. I can see why it was a word-of-mouth hit in 1989, and why the Oscars gave it the big one. It’s well made and very faithful to the Pullitzer winning play it’s based on. Beresford’s genteel direction lets the dialogue and actors do the work (he didn’t get a nomination – though even he modestly said later he didn’t really feel he deserved one).

Freeman and Tandy do decent work with these incredibly simple characters. Tandy could have played this cookie-cutter “cantankerous-but-loveable-old-lady” role standing on her head. But she does it well (again, drawing those Downton parallels, this is exactly the same role Maggie Smith has in that series) and nails a little speech where she wistfully remembers visiting the sea then stops as if embarrassed by her self-indulgence. She won the Oscar.

Freeman here (and in Glory) invents a screen persona. He’s kindly, worldly-wise (but not bookly wise – he ain’t never had time to learn readin’), patient, long-suffering but full of dignity. But, with his repeated “Yassums”, his non-complaining acceptance of his position and status and his deferential nature, he’s pretty close to a sort of fantasy Uncle Tom-ish figure. Sure, Freeman can sell those quiet moments, where it’s clear Hoke has learned to bury feelings of fear (his brief confrontation with a racist cop – and his controlled fear – is the film’s most effective moment) but the whole performance feels like a carefully constructed lie.

It’s in line with the film, where the black experience has been cut down and filtered in such a way to make white people feel good about themselves. Because we can watch the film and go “oh yeah I’d be like Daisy and Boolie, they’re so sweet” and we wait 52 minutes before an unpleasant character turns up and uses the n word – and then he’s mean to Daisy as well for being Jewish and heck gosh darn it we are all the same after all, what a relief, pass the popcorn. You come out of Driving Miss Daisy and you have learned nothing.

Worse than that, you’ve been shown a cuddly fantasy world. We never see Hoke outside of the setting of his master’s homes (there is no other way of putting it) and learn nothing about his life or experiences. We see him melt the heart of an already-fundamentally-decent woman, but their relationship always has boundaries. Driving Miss Daisy would be fine as an escapist piece of fluff – but time has shown it increasingly to be a film designed to make us feel reassured that history wasn’t as distressing as it might have been. And I’m not sure that’s a good thing.