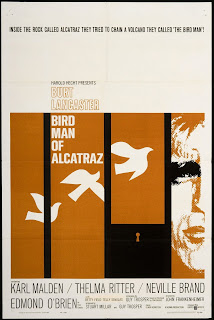 What is prison for? Is it just a cage – or should it offer reform and self-improvement? Debates like this have existed from the moment the first mass-prison opened. Birdman of Alcatraz taps into this, presenting a romanticised image of the life serving time of Robert Stroud (Burt Lancaster), a double convicted murderer (including killing a guard in prison) who narrowly escapes a death sentence, sentenced to a lifetime in solitary confinement. Stroud develops a passion for ornithology, eventually becoming one of the world’s experts on avian disease – all while confined to his cell.

Front and centre in Birdman of Alcatraz is Burt Lancaster. Made by his production company, and hand-picked director (after firing Charles Chrichton), Lancaster’s prickly persona and patrician distance is wonderfully re-directed as a man who, for much of the film, carries a strong whiff of danger and violence. Surly, bitter and unrepentant, Lancaster brilliantly captures Stroud’s monomania which blossoms into a realisation his own life has been wasted. Oscar-nominated, Lancaster makes Stroud hard-to-like, but one who we slowly relate to as his brutality into a sort of recognisable humanity, however sharp-edged and un-appealing he can be.

Frankenheimer’s well-made film – it’s strikingly less flashy than much of his early work, instead using a restrained sense of documentary realism – is one I found both entertaining and involving, but also strangely troubling. But first the positive: there is no doubt this is a great “prison” movie, perfectly capturing the monotony and boredom long-term solitary confinement brings. It reduces the world into something small and oppressive – Stroud has a cell, a corridor and an exercise yard – and Frankenheimer pours on the sympathy for prisoners who are caged in a system that removes any individuality from them to turn them into docile drones.

Stroud faces a permanent struggle to win the right to keep and study his birds – including going into business selling his bird illness remedies – in the face of a system that wants him to sit in his silently in his cell. It’s hard not to be engaged with Stroud, and the lengths he must go to sustain the new hobby that has given him a reason for living. A birdcage is fashioned out of a crate after months of work. Endless variations on cures are attempted to deal with an outbreak of disease. There is even a bureaucrat warden – well played by Karl Malden as a functionary who is all duty and no imagination – who strongly believes indulging this nonsense is letting him off lightly. And maybe he’s right.

And it’s that issue which I find troubling at a film. This is a conscious attempt to turn Stroud into a sort of Mandela of Ornithology. But, scratch the surface of researching the film, and you discover Stroud was a man repeatedly diagnosed as a psychopath, who committed acts of brutal murder. This is a film that asks us to look at a man and sympathise with him, based on his passion for his hobby – like a Herman Goering biopic that focuses on his love for art. Reflecting real life, in the film Stroud never expresses a jot of regret or remorse for his crimes. The film argues his work with birds shows he has been rehabilitated – but I would argue his utter inability to recognise any moral responsibility for his actions, shows he is in no-way suitable for release.

Let this idea trip into your head and then, no matter how well made the film is made – or how well acted or engaging the story is – you suddenly twig this is a film about a man who forms stronger relationships with birds than he does with other human beings. Stroud will slave for months to save his bird – but barely bat an eyelid at the death of a man. His closest bond seems to be his antagonistic relationship with Malden’s warden, while even his closest prisoner companion (an Oscar-nominated Telly Savalas) is someone who passes out of his life for years at a time with no reaction from Stroud, and who seems capable of more regret and reflection than Stroud.

Fitting his sociopathic profile, Stroud’s only real human contact is formed with his mother. And, like White Heat’s Cody Jarrett, they have the same all-encompassing (and damagingly facilitating) relationship. His mother – played with a skilful sense of control and emotional manipulation by Thelma Ritter – constantly excuses her son’s sins, while demanding she remain his principle (ideally only) personal contact. To her, all other people – especially women – are a dangerous corrupting influence. This is not a healthy relationship, but the film doesn’t explore it, other than positioning the mother as a beast, who furiously drops her son when he decides to marry (for convenience so she can visit him) a fellow ornithologist, played by Betty Field.

In real life, Stroud was a brutal killer – not the rogueish old man he becomes by the film’s end, charming journalists – but his personality is re-positioned to take a stance on the ethics of prison reform. The film has, not surprisingly, an optimistic 1960s feeling that free-will and independence should be prioritised and that the system only crushes those feelings. Life isn’t as simple as that, however much Birdman of Alcatraz wants it to be. However, it shows you can still hugely enjoy a film that you disagree with. I guess that’s the sort of oddity that makes us human.