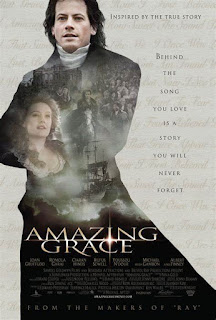 From 1782 to 1807 William Wilberforce (Ioan Gruffudd) fought a long – sometimes lonely – campaign to end the slave trade (and eventually slavery – the film confuses the two, with slavery continuing in much of the Empire for over twenty more years) in the British Empire. During that time, he competed with vested interests, parliamentary rivals and accusations of being a radical at a time when Britain was at war with Revolutionary France.

Michael Apted’s old-fashioned film covers this, hitting every beat you would expect for a biographical drama. It uses a traditional framing device of starting in the middle of the story: Wilberforce in 1797, depressed, hooked on laudanum and out of hope, revitalised by meeting Barbara Spooner (Romola Garai) who will become his wife. This makes for a perfect narrative tool as it means she can ask him questions like “tell me what happened” which serves as a neat entrée into a whole host of flashbacks sketching out in the swiftest means possible the history of abolitionism.

Amazing Grace could have been made in the 1930s, so closely does it hue to the classic rules of biopics. It’s practically a structural brother to The Life of Emile Zola, a hagiographical portrait of an (admittedly outstanding) man which shows the expected arc of moral awakening, early success, tricky mid-point, the sad years, getting the band back together for one final big push ending in friends and foes alike coming together to hail his accomplishments. It’s all threaded together with a script that carefully moves through every event, simplifies history down and sometimes wears its research rather heavily.

You can’t argue that it isn’t well-meaning and heartfelt, but its simplicity (and the careful traditionalism of its shooting) makes it look more like a well-made TV special than an actual movie. But if you are a sucker for such things, as I am, it has more than enough to engage you. It also makes a compelling case about the horrors of the slavery and allows a few moments of spotlight to fall on former slave turned abolitionist Olaudah Equiano (well played by Youssou N’Dour). It certainly has its heart in the right place, its passionate liberalism and sense of moral outrage very clear.

Gruffudd – his skill for playing reluctant moral authority and duty honed from playing Hornblower – is good as Wilberforce, his obvious investment in the subject matter clear. Garai doesn’t have much to do other than tee up flashbacks, but does it with charm. Many of the rest veer on the side of fruity: Hinds and Jones scowl effectively as slave-owning senior lords (for some reason they sit in the House of Commons; Jones is even playing a Duke for goodness sake!). Gambon twinkles as only he can as Charles James Fox. Finney hams up lustily as the blind John Newton. Best of all though are Sewell as an eccentric Thomas Clarkson and Benedict Cumberbatch in an early sign of star-quality as the morally divided, reserved but decent Pitt the Younger.

It all comes together into something that seems tailor-made for Sunday afternoons. Nothing wrong with that – and not every film needs to reinvent the wheel – and since it wears its heart so openly on its sleeve, you can’t help feeling warmth towards it. It’s a Spark notes look at history – and glosses over the fact that slavery itself continued for decades – but as hagiography it’s endearing and as a feel-good biopic it succeeds at what it sets out to do.