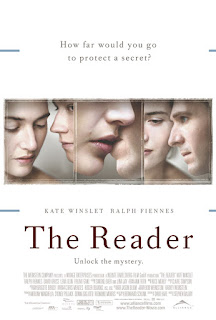 In 1960s Germany, teenage Michael Berg (David Kross) falls in love with an older woman, Hanna Schmitz (Kate Winslet), a tram conductor who seduces him and asks him to read classic novels to her in between bouts of passionate love making. As an adult (Ralph Fiennes), Michael has never got over the effect the affair had on him. But that’s largely because, as a law student, he sat in on a trial where he discovered Hanna was a guard at Auschwitz, responsible for the gas chamber selections and later locking 300 Jewish women into a burning church.

Her co-defendants turn on Hanna – but Michael realises that Hanna is illiterate so cannot possibly be the author of the reports that her co-defendants says she wrote. Hanna is imprisoned – but years after the trial, Michael rekindles a distant contact with her, sending her recordings of books he has read, which she uses to teach herself to read. Will these embodiments of new and old Germany manage to come to terms with their shared past?

There is no way round this: The Reader is a truly dreadful film. It might be the worst film nominated for Best Picture this century (the backlash over its inclusion over The Dark Knight led to a radical change in nomination rules). It is sentimental, trite, insulting, empty, vainglorious awards-bait, shot with a heritage-stylishness. It utterly fails at almost every single thing it attempts to do: from coming-of-age drama, to questions of moral responsibility in a police state, to a country reconciling with its traumatic and criminal past. In fact, it fails so utterly and completely, you are more likely to be left open-mouthed at its crude tone-deafness than remotely moved by its emotional manipulation. It is a truly dreadful film.

Daldry’s highly average direction (Oscar-frigging-nominated!) is sickeningly twee, using a number of carefully staged moments to tweak heart-strings and point our sympathies the right way. It’s the sort of Holocaust film where the only direct engagement with the subject is a beautifully framed, poetically-scored, insultingly-genteel scene of the hero visiting Auschwitz and starring sadly at collections of shoes and the gas chambers. Presumably because, any shots of the actual Holocaust – or the crimes of Hanna, who happily confesses to selecting thousands of women and children for death – would end any chance of us feeling sorry for her.

Because this is indeed a film that feels it is challenging us to say “look again” – as if Daldry and screenwriter David Hare are sitting on our shoulder saying “Ah you think it’s all black-and-white, but see how things are more complex than that”. So we are shown a concentration camp worker whose defence really is that she was just following orders – and we are asked to sympathise! She only voluntarily signs up for the SS because, you know, it was a better job than the factories. In a crudely empty moment she asks the judges at her trial “what would you do?”. Daldry shoots like this as a “Gotcha” moment – we are clearly meant to come away from that moment feeling “ah yes, there but for the grace of God go all of us”.

Only that is, for want of a better word, bullshit. Turning your back on Jewish neighbours being taken away out of fear for your own safety would be one thing, but taking a job in a death camp, selecting people for death and then watching 300 people burn to death in front of you but doing nothing? That is quite another. And the film knows this deep down, which is why we never get a flashback, or a photo, or anything that might make us sit up and go, “hell I don’t care how much you were just a foot soldier, what you did was just wrong”. To really top it off, the film even makes it clear Hanna took this job freely (not under duress, or because she was poor and starving, or any other extenuating circumstance that might prompt complex questions about what “normal” people do under evil governments) – and she’s not sorry. Not even a little bit. Not ever at any point. 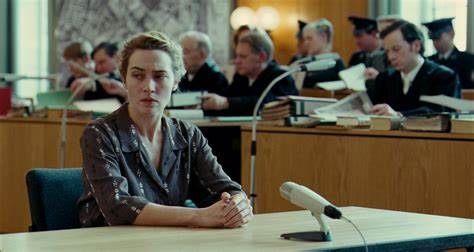 These muddied morals carry over to the vomit-inducing idea that we should feel sorry for Hanna because she is fascinated by literature but deeply ashamed of her illiteracy. So ashamed in fact that she would rather be seen as the ring-leader of a mass murder than illiterate. That very sentence alone should really give you an insight into her perverted psychology. And I love books, but I don’t think that would be much of a mitigating factor if I was also Jack the Ripper.

That’s not to mention that the film doesn’t even want to engage with the fact we are told Hanna selected sensitive, vulnerable children in the camp to read for her (and then had them killed) – and doesn’t draw a connecting line between that and her using the same tactics with Michael, seducing a vulnerable 15 year old child to control him so that he will read to her. Her behaviour is clearly not some secret shame, the product of an isolated set of circumstances that will never come again – it’s who she is, and she has made no effort to change it. Hanna is worse than a child abuser, she’s a sociopathic monster and the film’s attempt to paint her as something else is appalling.

I suppose it could have just about worked if it the film had managed to make some decent material out of its theme of Germany’s struggle with its history. But even that gets fudged. There is one decent scene, as Michael and his fellow students discuss morality with the professor (a cuddily Bruno Ganz), but other than that the idea gets lost in the cut. Instead it settles for “what would you do” confrontations and clumsy parallels between Michael’s distress about finding out the truth and his trauma and guilt leading to a struggle to emotionally connect with people.

But then he’s only matching the film which has no emotional understanding of people. It sees nothing wrong with what I am about to describe. After Hanna’s death, Michael follows the request of her will to take her life savings to the daughter of one of her victims. Not only is Michael emotionally illiterate enough to carry out this shockingly tone-deaf request, but (amazingly) the woman not only sees him in her home but keeps as a souvenir the tin Hanna kept her cash in and then puts the tin next to a her picture of her family murdered in the Holocaust. Even writing it I can hardly believe I saw it. It’s the film’s attempt to say “look there is hope” but not in any universe does any of this behaviour seem even remotely real.

The Reader instead wants to try and juggle a big theme (the Holocaust) with a cliched one (a coming-of-age for a young man) and throw in an airport-novel faux big theme (isn’t reading great!) into a syrupy, awards-winning piece of prestige cinema. It probably deserves some sort of award for getting everything about this catastrophically wrong. By the time Hanna climbs on a pile of books she has made to hang herself, you’ll be desperate to give her a shove.

Oh, Kate Winslet won an Oscar. She’s does her usual excellent job. But the film is utter dogshit.