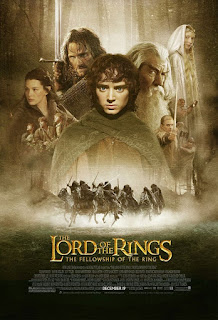 When it was released, people wondered if there was a market for three mega-length adaptations of Tolkien. By the time it finished, Hollywood was casting eyes at The Hobbit and working out how many films that could stretch to. Peter Jackson’s The Fellowship of the Ring is a film so completely perfect it pulled off the near-impossible: embraced all, from the novel’s passionate fanbase, to lovers of blockbusters and connoisseurs of cinema. Jackson turned a landmark novel into a landmark film, the sort of work that decades of other films (and TV shows) would be inevitably compared to. By any benchmark, The Fellowship of the Ring is a cultural and cinematic turning point.

Frodo Baggins (Elijah Wood) is a young hobbit who inherits his home from his Uncle Bilbo (Ian Holm) – along with a mysterious ring which gives its wearer the power of invisibility. But more than that, this ring is the very same ring crafted by the Dark Lord Sauron: the source of his power and possibly the most evil item in the world. Warned of its danger by his uncle’s old friend, the wizard Gandalf (Ian McKellen), Frodo agrees to carry it first to the elves at Rivendell – and then from there to the fires of Mount Doom, the only place it can be destroyed. Joining him on this perilous quest is a ‘fellowship’: Gandalf, fellow hobbits Sam (Sean Astin), Pippin (Billy Boy) and Merry (Dominic Monaghan), elf Legolas (Orlando Bloom), dwarf Gimli (John Rhys-Davies), human Boromir (Sean Bean) and the mysterious ranger Aragorn (Viggo Mortensen), who may be the heir to the kingdom of men.

Jackson’s film faced a huge problem from the start: cater to the fans too much, make it too drenched in the high-fantasy of the novel, and you risk alienating an audience sceptical about stories of magic and elves; push the film too far the other way and it becomes something denounced by the fanbase. Fortunately, Jackson (and fellow scriptwriters Fran Walsh and Phillipa Boyens) transform the book into a masterfully-paced, emotionally-invested epic saga with moments of comedy and tragedy and an overwhelming sense that colossal stakes are being played for. By focusing on what makes The Lord of the Rings such a great story they helped nail making it accessible to the sort of people who wouldn’t dream of picking up a fantasy book.

The novel is carefully, subtly altered throughout to increase pace and build up the emotional depth of the characters. Its timeline is telescoped (Gandalf’s 19 year research into the ring becomes a few months), stand-alone sections removed (good bye Tom Bombadil) and personal conflicts and emotions are subtly made more prominent (most notably Gandalf’s grandfatherly affection for Frodo and the conflicted admiration and resentments between Boromir and Aragorn). What this succeeds in doing is creating a film that actually alters a lot of the original book (reassigning multiple actions and shifting many motivations) but ends up carrying so much of the emotional and narrative truth that it feels completely faithful. The tone is perfectly captured but also becomes a gripping, cinematic drama, populated by characters who feel real, for all their hairy feet or wizard’s hats.

The script is a perfect mixture of the greatest lines and quotes from the book, expanded with a real understanding of character motivation. Its all complemented by faultless direction with a sweeping visual panache from Jackson. This is a passionate director, working at the top of his game. The film is, of course, breathtakingly beautiful – New Zealand, the perfect location for Middle Earth, still dines out on the tourist trade to this day – but Jackson brilliantly mixes the epic with touches of his own Grindhouse roots. So, he can shoot stunning chase scenes with Nazgul or dreamy ascents of mountains with the same flair as he can the grimy, body horror of an Uruk-Hai’s birth. I can’t stress too much the level of Jackson’s achievement here: the film shifts between genre and tone from scene-to-scene: the Moria sequence goes through mystery, whimsy, regret, tragedy, action, awe-inspiring scope then crushing loss. Another director could have made that feel like a wildly veering train – Jackson makes it feel all of a piece. Not a single scene is untouched by directorial genius.

Jackson’s passion for the project was communicated to the entire team. In every single technical department, no effort has been spared to create Tolkien’s world (and crucially it always feels like Tolkien’s world). Stills of this film could be slotted into editions of the book and not look out of place. From the detail of the costume, design of the sets, to the writing of elvish – not a single prop, set or costume doesn’t look like it belongs. Everything feels grown out of the imagination of the reader. It’s helped hugely by the effort to recruit famed Tolkien illustrators Alan Lee and John Howe: their iconic visualisations of the novel inspired every inch of the design.

It’s also a film that feels real (even though so much of it was of course made in a computer). The film used practical locations and shooting tricks wherever possible. Obviously, the New Zealand landscape was used to sumptuous effect, but also wherever possible models and miniatures were used. Even the height differences between hobbits and other characters were largely achieved in camera. It’s an approach which not only subconsciously communicates an intimacy, it also helps make the story feel even more grounded: a sense of dramatic events happening to real people.

The film also brilliantly establishes the sinister darkness of the ring. One of the trickiest things in adapting Tolkien is dealing with the fact that your villains are a suspended glowing eye and a gold ring. TFOR expertly establishes the dark malevolence of the Ring, as a sinister, manipulative, wicked presence that corrupts those around it – it’s even given its own darkly seductive voice. Never for a moment does anyone watching this film doubt that it is bad news, its absolute is evil totally accepted. Think about that for a second and that is a stunning achievement.

Then there’s the score. If you ever wanted to prove to someone how important music is to the experience of watching a film, show them this one. Howard Shore’s orchestral compositions not only deepen and enrich every frame they accompany, they are also perfect in capturing the tone of novel. From the piping hobbit music, to the demonic choirs of the Nazguls, to the soaring but mournful themes of Gondor, this film could almost be a musical. Watch it without dialogue and you still follow it perfectly.

Jackson also nailed the cast. Ian McKellen quite simply becomes Gandalf, on the surface a twinkling grandfatherly presence, but below a frighteningly powerful man carrying centuries of wisdom. It’s a brilliantly iconic performance. Elijah Wood brings a wonderful innocence that slowly strips away as Frodo. Ian Holm’s Bilbo is a delightful charmer with flashes of corruption. Viggo Mortensen is all charisma and conflict as Aragorn. Christopher Lee was born to play Saruman. Liv Tyler was a revelation as Arwen. Sean Bean’s masculine Boromir hides deep-rooted personal doubt, insecurity and fear of failure. The cast is perfect.

And there isn’t a duff scene in the film. It’s opening montage is a masterclass in narrative introduction and awe-inspiring action. The Hobbiton sections have just the right tone of whimsy. The chase through Moria turns descending a staircase into a nail-biter. The final breaking of the fellowship gives us breath-taking battles and heart-rending tragedy, along with an iconic death scene.

No one else could have possibly delivered the novel to the screen better than this. Jackson’s fingerprints are on every inch of the film. It’s a masterclass in adaptation, a beautiful thing to watch and listen to, exquisitely acted and utterly compelling. Both true to the novel and totally engaging for newcomers, it might be the best of the series – and when it was released, felt like the film Tolkien fans had been waiting for their whole lives.