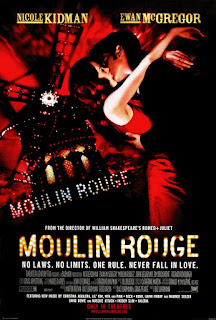 It’s 20 years old now and I still don’t think there has been anything quite like Moulin Rouge! Believe me it’s not for want of trying. Baz Luhrmann’s hugely inventive, uniquely stylistic musical is cinematic marmite: either loved or reviled (not sure I’ve ever met anyone who had a meh attitude to it). One of the pioneering inventors of the juke-box musical, Moulin Rouge! mixes pop songs with inspiration from opera to Greek myth and comes up with something Spectacular, Spectacular.

It’s the turn of the century, and Christian (Ewan McGregor) arrives in Paris looking for truth, inspiration and above all: love. Arriving at Montmartre, he and courtesan Satine (Nicole Kidman) fall in love. Satine is the star at Harold Zidler’s (Jim Broadbent) Moulin Rouge and also the star of Zidler’s planned stage show. She has been promised to his wealthy backer the Duke (Richard Roxburgh). With Christian commissioned to write the script, can he and Satine hide their love from the Duke and make sure the Show Goes On? Or will tragedy strike?

Fast paced and electric, Moulin Rouge! could inspire motion sickness, especially in its opening 15 minutes which throw us deep into its unconventional medley of styles, tones and inspirations. Did that first 15 minutes lose a lot of people? You can imagine it as the earliest scenes featuring Christian’s meeting with Toulouse-Lautrec and the other Bohemians are by far its weakest. If your irritation grows at these shrill scenes (crudely over-acted with an overbearing Keaton-ish energy), I can well imagine thousands of viewers checked out in Luhrmann’s music inspired Moulin Rouge can-can musical with its explosion of rap, Nirvana, Lady Marmalade and insanely quick cutting. It’s a statement opening – and throws you straight into its heightened reality. A tone that continues for much of the opening 40 minutes.

Luhrmann leaves nothing in the locker room here. Only a director of such exuberance, playfulness – but also deep skill and understanding of high and low culture – could have balanced it as well as he does. Go with it and you’ll love it. It’s pure operatic entertainment. Luhrmann’s master-stroke is to shoot a period musical in the style of the high-velocity music-video pop that excited people in 2001 – finally you get a sense of why the Moulin Rouge and can-can seemed so exciting and sexy back then. It’s a night-club of 1999, thrown into 1899.

But what makes the film work after that initial explosion of energy – and I’ll agree that the first 15 minutes tries too hard to grab your attention – is that Luhrmann mixes the styles up so effectively. There is everything here, from Busby Berkeley numbers to heartfelt love ballads to dreamy duets to a sexual tango to a classic theatrical set-piece, tinged with a spot of tragedy. Every musical number seems inspired by a different genre and style of musical theatre. And the use of modern pop music is fun, entertaining and mines the emotional connection we all feel for the best pop songs.

It’s an MTV pop musical, mixed with Gene Kelly, lashes of camp, cheeky humour and finally tragedy and suffering. It’s got a million cuts in it, but Luhrmann successfully makes the film darker, slower and more intimate as the film progresses. From the electric dynamism of the opening, this becomes an increasingly personal tragedy revolving around five key characters. It never loses that sense of showmanship – Zidler’s planned production is an overblown Bollywood inspired extravaganza that delights in recreating the joy and brashness of that genre – but the final hour is a more adult, foreboding movie with plenty of heart.

Moulin Rouge! is all about Luhrmann’s gadfly brilliance to discover inspiration from a host of sources, pulling it together into something brilliantly original, from the plot – which is inspired by La Boheme by way of Orpheus and Eurydice – to brilliant montage songs like the Elephant Love Song Medley, which takes snippets from nearly every popular love song you’ve ever heard. Very few films can switch so effortlessly from cheeky, end-of-the-pier humour to gut-wrenching tragedy. It’s energy effectively and brilliantly applied, and that comes from the director (who was, of course, inexplicably not among the films eight Oscar nominations).

Luhrmann also gets the actors to perform with the sort of energetic, fully-committed exuberance the film needs. The principals go at every single scene with no hesitations at all – bless them, none have any concern with appearing silly at all. McGregor reveals a sweetness and earnestness (as well as very strong singing voice) he hadn’t shown before. Kidman was an absolute revelation as a woman hiding doubt, insecurity and fear under an exterior of pure confidence. Broadbent’s comedic brilliance is matched with his dramatic flair. Roxburgh is hilarious, and also vile, as the selfish Duke. Luhrmann recognises their strength – after the first 10 minutes every scene features at least two of these performers.

Things have clearly been cut here and there. Motivations and even characterisations of some of the other members of the Moulin Rouge troupe change from scene-to-scene. Sometimes it tries too hard to be inventive. But it works so often that it hardly matters. And the remixes of the songs for performance are outstanding. The “Like a Virgin” Busby Berkely number is hilarious, the “Roxanne Tango” breath-takingly influential. “The Show Must Go On” is powerfully doom-laden and “Your Song” beautifully romantic. “Come What May” – the only original number – is an iconic ballad.

There’s not been anything quite like Moulin Rouge! – and Luhrmann has never managed to match it again since. Electric, dynamic, exciting, heartfelt, moving and above all extremely joyful, it has some brilliantly judged performances from its lead actors. There hasn’t been anything like it since – and I’m pretty sure we won’t see it’s like again.