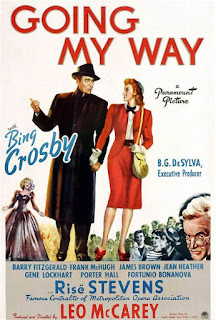 “Schmaltz isn’t selling” record producers tell Father O’Malley (Bing Crosby) when he pitches them the little ditty he’s penned to raise funds to save his church from financial ruin. Well no one told the producers of this film: and just as well, as this became one of the most successful films of the 1940s, raking in buckets of cash and armfuls of Oscars. Watching it today, you’d hardly believe it – but that’s to forget the stress and fear of a nation at war, or that Bing Crosby (in a tailor-made role) was practically the most popular human being alive. For all that, watching Going My Way today won’t challenge you at all – other than perhaps your patience.

Father O’Malley (Bing Crosby) arrives in a (allegedly) rough neighbourhood in New York. He’s to take over the parish from the ageing Father Fitzgibbon (Barry Fitzgerald) but, gosh darn it, Father Bing doesn’t have the heart to tell Father Fitzgibbon that, so pretends to be his new curate. Promptly, Father Bing sets about solving all the problems of the parish with his charming homespun wisdom, decency, empathy and ability to bond with all. Gosh darn it, before you know what’s happened he’s turned the rough-and-tumble local boys from larcenists into an all-male choir and has roped in an old friend (who just happens to be the lead singer at the MET Opera) to give him and the boys the stage to sing a few of his songs and help save the church.

Yup, Going My Way is exactly that sort of film, and your enjoyment of it is going to be inversely proportional to how quickly being dipped in pure schmaltz brings you out in hives. This film is sickly sweet in its cozy comfort, a reassuring view of a world straight out of Enid Blyton, where the priest has all the answers, the hearts of businessmen can be melted by a few wise words, and dropping a few sporting references can win over the local ‘tough’ kids.

Going My Way is so homely and quaint, it makes Capra feel positively edgy. In fact, it lacks any of the energy, wit and style Capra brings to his pictures. That lack of buzz doesn’t help it, the languid pace drawing your attention all the more to its overbearing decency and careful weeding out of anything that could even cause a scintilla of doubt.

Instead it’s a warm gentle hug – and a hug that takes a great deal of time (at just two hours, it can seem like it’s going on forever). There are fewer songs in it than you might expect – only one every 10-15 minutes max. Often very little happens – and when it does, drama is very far from the agenda. Instead every problem is solved with consummate ease (it just needs Father Bing to open people’s eyes). Everyone is at heart decent in the extreme: the local tough kids have more high spirits than hooliganism to them, the (very) Irish women have stern exteriors but soft hearts, and the ruthless businessman is a devoted family man. After a while, I felt my patience being sorely tested.

In the middle of this, we get Bing Crosby, who won an Oscar for his work here. It’s a part tailor-made for Bing. In fact, so much so, that he essentially turns O’Malley into a dog-collar wearing version of his own stage persona, with touches of wry humour, whimsy and an affectionate smile. It’s no mean thing creating an entire persona – or performing it – but it feels a little rich to win an Oscar for it. O’Malley is of course perfect, a man free of any blemish who backs humbly into the limelight. A liberal who thinks Church should be fun (though far from a radical), there is nothing to cast even a shadow of doubt on his perfection: his flirtation with a girl never went so far as a date, he has the patience of a saint and he always knows exactly what to say to everyone. 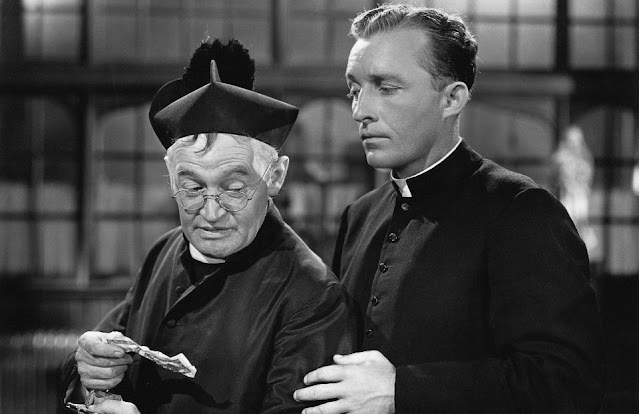 He even wears down the defensiveness of Barry Fitzgerald’s Father Fitzgibbon. Fitzgerald also won an Oscar (for Supporting Actor) and effectively created the cinematic template for what an Irish priest is life. Fitzgibbon is bumbling with a sing-song whimsy, stuck-in-his-ways but basically decent, a touch prickly but also vulnerable and caring. His Irishness (like many of the rest of the cast) is dialled up to eleven. It’s an engaging performance, even if this old-cove-with-a-heart-of-gold schtick already felt familiar. But blimey, like the rest of the film, it can be far too much.

John Ford would have loved the Irish sentimentality of this film. It’s not perhaps Going My Way’s fault that its unquestioning regard and confidence in the church – and the assumption that all would treat them with complete deference and absolute respect – has dated it. But then maybe this was the case then as well, and it just felt much more reassuring to watch a simple world where a priest has all the answers and can change everyone’s lives. In the simple world of the film, you just let the cliché and coincidence wash over you and go with the flow.

Nevertheless, it still can make for a long watch if you aren’t in the right mood for this constant spin of Sunday-afternoon-gentleness. I have to confess it was too sweet for me – way too sweet. And there isn’t much of interest in the film, McCarey directing with a professional but uninteresting staidness (you couldn’t believe he cut his teeth doing Laurel and Hardy, so visually dull and slow is this film). Every outcome is dipped in sentimentality and sweetness and eventually watching the film is like gorging on candy-floss. Light, insubstantial, not as filling as it should be, and at the end you feel like throwing up.