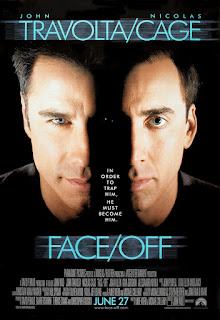 After five years, Sean Archer (John Travolta) has finally caught his nemesis, terrorist-for-hire Castor Troy (Nicolas Cage). But, with Castor in a coma, only his brother Pollux (Alessandro Nivola) – yup really – knows the location of the deadly bomb they planted in Los Angeles. With Pollux now in prison how can they get him to talk? Well obviously the easiest way is for Archer to undergo extensive, experimental surgery to alter his build, voice and (piece de resistance) have his face removed and replaced with Castor Troy’s. And of course, this should be top secret so no-one knows it happened. Because there is absolutely no chance Castor will wake up from his coma and have Archer’s face placed on his own head is there? But of course. Let the violent mayhem ensue, as Troy/Archer (Travolta) manipulates the FBI for his own ends and Archer/Troy (Cage) battles to reclaim his life and face.

Face/Off it’s clear is a very silly film. It works, because it knows it is a very silly film. It dabbles only lightly in the psychological trauma of finding yourself in another body – and in Archer’s case not just any body, but the body of his son’s killer. But it’s less interested in that than in seeing the two actors have immense fun apeing each other’s intonations and mannerisms. Travolta in particular has a whale of a time as the id-like Troy/Archer, campily springing about the stage and good-naturedly mocking his own physique (“This ridiculous chin”), while prancing about with all the wide-eyed, giggling mania Cage has made his own.

In case you hadn’t worked it out in a film where faces can be swopped, nothing feels like it’s happening in the real world. Gun battles defy logic and physics. Archer’s obsessive pursuit of Troy in the film’s opening battle causes a jaw-dropping level of destruction, mayhem and death (in a real world, with his obvious psychological problems, he would have been off the case years ago). But then, he’s so reckless perhaps that’s why people don’t really notice when he’s replaced by Troy.

There are some interesting beats, many of them centred around Troy/Archer’s arrival in the Archer family home where he forms a superficial bond with Archer’s daughter (including saving her from assault from a creepy boyfriend) that, aside from his obvious insanity, perhaps things could be different (and there is a suggestion Troy/Archer plays with the idea of going straight – or at least a corrupt version of it). Joan Allen comes on board to add acting lustre as Archer’s doctor wife, so distant from her husband for years that she needs time to work out he’s been replaced.

But the film’s heart is in the violence. There are five or six action set-pieces that use every weapon in the Woo arsenal. Slow-mo? Check. Operatic grandness? Check. Walking with intent? Check. Diving forward while firing two guns? You betcha. Doves? But of course. Any real sense of logic is thrown out of the window, and really the film at heart is a comedy of two famous actors pretending to be each other, in between jumping at each other, screaming their heads off, practically making gun noises while they point their weapons, like maniac kids.

And, you know what? It works. Sure the entire enterprise feels very much of its time: and Face/Off captures Woo’s style so perfectly (with its huge bodycount and reckless disregard for life and property) that he never topped it again. A director who basically could do one thing really well (future films would merely demonstrate his limitations), throwing himself into a film of intense silliness, with big-name stars having a whale of time and action set-pieces that make no real sense but are impressive to watch, he aces it here. Face/Off is an odd classic of its time, ludicrously silly but always choosing to double-down on its intense silliness – to gloriously entertaining effect.