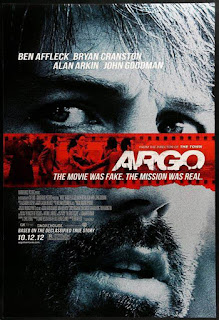 There is an art to telling a “true story”. Apollo 13 is a masterclass in turning a story everyone knows into edge-of-the-seat tension. For many people, Argo does a similar trick. It doesn’t for me. I can’t understand the praise for this middle-brow, conventional movie other than that its smoothly made blandness makes it easy to watch. I got so annoyed when re-watching it I threw my slipper down in anger, like the middle-class rebel I clearly am.

Anyway, the film kicks off with the US embassy in Tehran being stormed on 4th November 1979. While the embassy staff are taken hostage, six embassy officials escape and find shelter with the Canadian ambassador Ken Taylor (Victor Garber). But how to get them out of the country safely? CIA extraction officer Tony Mendez (Ben Affleck) comes up with the “best bad plan we’ve got” – set up a fake Hollywood production company, finance a fake movie, fly to Tehran, then fly the fugitives out on Canadian passports, passing them off as the movie’s crew on a scouting mission. The cover film is sci-fi epic Argo, and with producer Lester Siegel (Alan Arkin) and famous make-up artist John Chambers (John Goodman) on board to give the project realism, the mission is on.

Argo won itself a lot of friends on the way to its Oscar for Best Picture. Why? Because this is a very easy-to-swallow, middle-of-the-road film that successfully turns an American foreign policy disaster into a charming heist movie with a happy ending. It faithfully follows the pattern of all heist movies: the crazy idea, pulling together the perfect team, the difficult rehearsal, the weak link who pulls it out of the bag at a crucial moment even the panicked “we do it anyway!” ending as the best-laid-plans need to be partially improvised on the fly.

In fact, for all its desperate attempts to look like a smart, political, 70s-style piece of cinema making, The Sting is by far and away the 1970s film it most resembles, for all it wants you to think it’s The China Syndrome by way of All the President’s Men. The film starts with an inspired story-board montage of the way Western interference in Iranian politics from 1953-1979 effectively ruined the country. But that’s as good as it gets politically. After that, any further attempt to engage with either Iran or America’s foreign policy gets completely abandoned. It becomes a simplistic rescue story stuffed full of uncomplicated goodies and baddies.

Hollywood of course loved it. Why wouldn’t it? There’s only one thing Hollywood loves more than a film that takes good-natured insider pot-shots at itself. And that’s a film where Hollywood saves the day. Argo does both. It’s a celebration of how Hollywood may be shallow, but when push comes to shove it delivers. Alan Arkin (Oscar-nominated for a role he could play standing on his head) coasts as a (fictional) old-school producer, selling the film’s mediocre punchlines about the Golden Globes, WGA and the uselessness of directors. Argo has a real “slap-on-the-back” air to it, the sort of gentle roast you might get from a guest speaker at an end-of-year party.

But of course you want to know: why did I threw my slipper? Quite frankly, Argo is a con. It starts with a burst of documentary-style realism, charting the attack on the embassy. The film uses a range of different film stocks, including home-movie style footage and newsreel material. It gives an impression of complete factual reality. But, like the movie, that’s just an impression. None of the footage we see is from the time period. It’s all glossily re-created to give the idea that we are watching something snatched from the headlines.

It’s probably the last time the film touches reality. Because from there Argo is a “true” story only in the broadest sense. Almost every single specific in the film is invented or repackaged. Most crucially, the film presents all this as a CIA operation from top-to-bottom. In reality, it was a Canadian operation, with the CIA providing assistance. Not the impression you get here. Even worse the end even has the team at Langley smugly smacking each other on the back and saying they’ll give the Canadians the credit for National Security reasons. Ouch. Not content with that, it also falsely accuses the Brits and New Zealanders of leaving the fugitives hanging out to dry. Ouch again.

I don’t mind most of the film’s other myriad inventions. Its fine to hugely expand the Hollywood stuff, as it’s fun. I don’t care that Mendez (who was Hispanic by the way – but I guess Affleck with a beard is the next best thing) was only in Tehran for 36 hours not the several days he is in this film. Building a bit of tension at the airport passport control – until that weak link proves his worth by talking fluently through the made-up film’s plot – is classic heist cinema. It’s cliched but its fine.

What really, really bugs me is that Affleck and team obviously decided the real story wasn’t exciting enough so – while poking fun at the shallowness of Hollywood – turned this story into exactly the sort of shallow adventure-fantasy that’s Hollywood’s bread-and-butter. In real life, there were nerves at the airport, and a delay to the flight. And there is a lot of old-school-conspiracy-thriller-tension that could have been created with that – if the film really was the sort of The Parallax View style thriller it wants you to think it is.

But that’s not bombastic enough for Affleck et al. Instead the ending is ludicrously overblown, stuffed with problems to overcome. The mission is off-then-on-again (this convoluted resolution requires a real-life childless man to have two kids at school). Then the Iranians work out something is up, and tear through the airport, guns waving in a race to stop the flight. Police cars race onto the runaway as the plane carrying our heroes takes off. And then I threw my slipper.

I threw it because it makes no sense. If the Iranian secret service knew about the extraction, they wouldn’t run through the airport. They’d RADIO THE CONTROL TOWER and stop the plane taking off. They’d scramble jets to bring the plane back while it was still in Iranian airspace. They certainly wouldn’t race cars onto the runaway – and I’m not sure a civilian plane would take off with an armoured car just underneath its wing. Nothing like this happened, or would happen. Its reality filtered through the tired cliches of Hollywood movies. It doesn’t even feel true.

Argo starts trying to comment on world affairs, but then focuses overwhelmingly on a minor victory in the middle of a disaster. The Iranian hostage crisis was a national humiliation that lasted years. But in this film, Affleck shows he learnt something from Pearl Harbor – just like that film’s celebration of the Doolittle raid, this uses a small success to excuse a disaster. We even get Jimmy Carter bragging in voiceover that the crisis was resolved without resorting military force: the only reason for that was because the military strike Carter himself ordered was so ineptly planned it had to be humiliatingly cancelled mid-mission.

Argo doesn’t care. It’s a cuddly story about Hollywood saving the day, that starts with a critical eye and turns into a cheerleader for Carter’s disastrous policy in Iran. The hostage crisis is a tough story it doesn’t want to talk about (a brief scene of some hostages undergoing a mock execution only reminds us that the film can’t be bothered to talk about them). It repackages disaster as triumph and pretends to be a cleverer, richer film than it is. It apes 1970s conspiracy thrillers and political films but is only a faint shadow of them. Garlanded with awards, it’s competent-at-best.