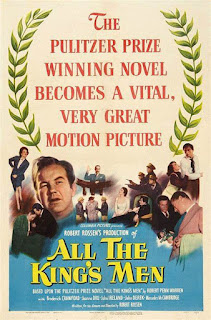 We only need to look at recent elections to see populist demagogues are far from being consigned to history. So, there will always be a touch of relevance to Robert Rossen’s Oscar-winning film All the King’s Men. Based on Robert Penn Warren’s Pulitzer-Prize-winning novel, which was itself a fictionalised version of the life of Huey P Long, the Louisiana Governor who championed the working man but also turned the State into his own personal fiefdom, until his assassination. Rossen’s film looks at the dangers of populist politicians, but at times it’s a blunted, simplistic look and is too quick to colour shades of grey into more digestible black and white.

Willie Stark (Broderick Crawford) is a hick with a dream of running from office. His first campaign for county treasurer is impassioned but naïve, and he stands no chance against the ruthless (Democratic – although it’s not named) party system ranged against him. He loses but gains the attention of idealistic journalist Jack Burden (John Ireland), dissatisfied scion of a rich family. Stark teaches himself law and runs for Governor – but is manipulated by the party machine to split the ‘hick’ vote and allow their own candidate in. However, Stark rediscovers his fire and later runs again and wins. Stark promises a state run for the little people: but his pockets are lined by big-business and the man who started as a sober Christian becomes a drinker juggling two mistresses: his secretary and advisor Sadie (Mercedes McCambridge) and (proving power is an aphrodisiac) Jack’s girlfriend Anne Stanton (Joanna Dru). But can proof of his growing corruption bring him down?

All the King’s Men is a film that would be far more effective if it allowed more scope to seeing the good in Stark, not just the bad. This is after all, a self-made man (teaching himself law at home), who builds roads, hospitals and schools. He’s not a Trump, interested only in himself and damn the consequences. Many of his policies are solid Roosevelt New Deal fare. Sure, he becomes grasping, lascivious and a terrible father – but how did this happen? Was it that Stark realised that corruption was the game and he needed to play it if he wanted to win? Were there deep lying flaws already in his character? We just don’t really know.

Instead this film sets out its stall very cleanly: populist working-class politicians are much worse than tortured wealthy liberals. The characters the film admires all hail from the same gated island community of the rich. Any hypocrisy or corruption on their part is a tragic character flaw. Stark comes from poor farm land – but any corruption makes him a monster. Really is Stark all that bad? The film stresses its moral disgust at his drinking and womanising, but in office he produces the sort of modern infrastructure the State will need. Sure a newsreel questions if the state needs a modern highway (in a patronising “they are just country folk” way) and maybe it didn’t immediately – but ask how they feel ten or fifteen years down the line.

The real problem with politics in this era is not demagogues like Stark. It’s the corrupt machine style politics that settles the elections in advance, shuts the doors against anyone they don’t like and uses muscle (metaphorical and literal) to enforce its will. This is an institutional fault line in American politics of the era: and you could argue Stark’s tragedy is not that he’s corrupt, but rather that he has to fashion himself into exactly the sort of corrupt, machine-style politics boss that the system can accept in order to win. The film isn’t really astute enough to recognise this. Instead it settles for the standard “Great Man” approach, where we can point at a single man and say “yup, he’s the problem. Get rid of him and problem solved”.

Rossen’s film takes an easy soft-left approach. The poor people love Stark, because the media tell them to (although the film has its cake and eats it by only really showing the liberal press attacking him). Stark raising campaign contributions to run from office is an unpardonable sign of tar coating his hand – never mind that we’ve seen his personally funded campaign for a minor office didn’t stand a chance. Working for the people, its argued, doesn’t cancel out the evils of trousering some cash for yourself – never mind that the wealthy liberals Rossen sympathises with, living in their large country houses, have clearly been doing so for decades. 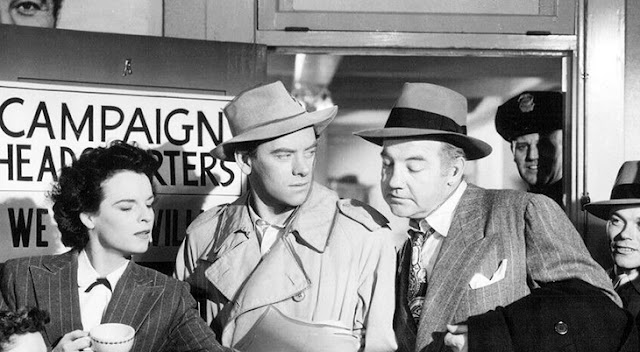 Instead All the King’s Men is a simple film that only scratches the surface of demagoguery. Stark makes great speeches, but we never find how far it’s a show and how far it’s empty rhetoric. We never find out enough either about what he has done or hasn’t done in office to make our own minds up. Rossen’s film fixes the tables and places all the blame not on the system but on a single man – and even suggests that getting rid of that man by violence and murder is in fact justified if the liberal elite decide it is. It’s not a good look for a film.

It bungles it’s politically and personally commentary, but you can’t argue that it’s not a well-made film. Inspired by neo-Realism, much of the film was shot on location (including effectively running a mock Governor campaign in parts of California) and its shot with an edgy immediacy, in places using non-professional actors. That’s a feeling helped by its sharp, jagged editing. Rumour has it that, with the first cut running long, Rossen asked the editor to find the narrative centre of every scene and then cut a hundred feet of film either side of it. The cleaned-up result of this is a edgy film that has the air of genuine reportage and effectively uses montage.

Broderick Crawford won the Oscar as Stark, and he plays the role with a sweetness that turns into brilliant bombastic swagger. The film uses his hulking physicality to marvellous effect, and while his character often feels simplistic, Crawford nails the speeches and Stark’s Lyndon B. Johnson like powers of physical intimidation. John Ireland (Oscar-nominated) does a decent if uninspired job as the weak-willed Burden, and Joanna Dru is a little too theatrical as Anne Stanton.

The most fascinating character though might well be political fixer/secretary Sadie Burke, played by fellow Oscar-winner Mercedes McCambridge. A radio actress making her film debut, McCambridge’s performance frequently avoids the obvious choices. Sadie is a hard-edged woman, unreadable, who has sharpened her personality to survive in a man’s world. Rossen’s film subtly codes that she is Stark’s mistress, but her relationship with him seems conflicted. She’s both vulnerable, but also bitter and cold to him – moments when you expect her voice to break, she’s hard, where you expect her to be sharp she’s brittle. She’s a bitterly cynical character who has given up hope. It’s a fascinating performance.

Rossen’s film is well made and is always going to have some relevance. But you feel it could have delved far deeper into its themes. But bluntly as a portrait of corruption, it’s not a patch on Citizen Kane and in Stark it sets up a monster we can have uncomplicated fun knocking over and then patting ourselves on the back once it’s done. For all its edgy, reportive feel, it’s a fantasy film.