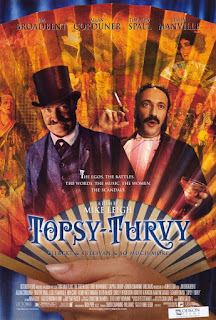 It seems an odd-fit: Mike Leigh, auteur of working class drama, prestige period films and the music of the middle-class in Gilbert and Sullivan. But that’s to forget Gilbert and Sullivan were among the masters of theatre – and Leigh himself is a theatrical great. Topsy-Turvy, from seeing the most uncharacteristic of the director’s works, in fact perhaps an examination of the creative process Leigh has made his life. It’s a wonderfully made, superbly executed tribute to the struggles and rewards of artistic creation. A celebration of how disparate personalities come together to create something bigger than themselves. Affectionate, heartfelt, at times quietly moving, Topsy-Turvy is both one of Leigh’s most enjoyable films and one of his most tender.

It’s 1884 and the creative partnership between WS Gilbert (Jim Broadbent) and Arthur Sullivan (Allan Corduner) is at a turning point. With their latest, Princess Ida, hardly setting the box-office alight. Sullivan feels the partnership has gone stale – and also feels under pressure to turn his attention towards more ‘serious’ composing. Gilbert refuses to change his next libretto, which Sullivan feels is effectively more of the same. Things change though when Gilbert is intrigued by an exhibition of Japanese arts and crafts, quickly creating a new libretto: The Mikado. The two geniuses, finally in unison, work together to bring the production to the stage.

Topsy-Turvy is probably Leigh’s most purely entertaining film. For anyone who has ever been involved in theatre or the arts, you’ll certainly recognise more than a few moments in this film, which is practically Leigh’s love letter to the arts. Leigh’s aim was to pay tribute to the difficulties of creativity and the demand of having to constantly refresh and reinvent your work to stay relevant and fulfilled. He succeeded: few films have so beautifully captured the struggle, pain, satisfaction and joy of creation or the strange anti-climax artistic success can bring.

Most of the second half of the film is a fascinating look at every step required to bring a production to life. From casting and contract negotiations, to costume fittings, staging and work in the rehearsal room. We get a fascinating insight into the complex backstage politics and squabbles in this small world. From actors bitching about the management (always incompetent, regardless of the situation) to the delight and playfulness of rehearsals as different opportunities are explored, it’s a wonderfully true insight into the theatre. Matched with the intricate and extraordinary detail of the reconstruction of the original production – and you have an enthralling insight into theatre. It also very appropriate for Leigh, whose organic methods of creating a film through copious rehearsal and improvisation remains very similar to theatre.

Alongside this though, the film has plenty of sympathy for the cost of creative exertion. Many of the actors lead sad and even lonely lives. Shirley Henderson’s Leonara Braham struggles with drink, Martin Savage’s George Grossmith is a drug addict (the company is too polite to mention it, but he’s clearly struggling with withdrawal at the dress rehearsal), Dorothy Atkinson’s Jessie Bond has constant pains from an unhealed ulcer. WS Gilbert and his wife lead a chaste life, he as terrified of intimacy and connection as he is of watching first nights. Sullivan juggles health problems and a long-running, regular-abortion marked, affair with Fanny Ronalds with a lingering sense of shame at not having exploited his talents more fully. These are lives that come to life when doused with creation, for all the off-stage world reveals trouble and strife.

Much of the first half is a wonderfully judged contrast between the extraverted Sullivan, keen to stretch himself but lacking the application and drive, and the repressed Gilbert, doggedly ploughing on with his (stale-sounding) original idea and unable to comprehend Sullivan’s reluctance. Leigh’s film could easily have manifested itself as a clash between two mis-matched partners. However, while the film expertly draws the parallels between the two, it also shows how much their energy comes from mutual respect. Sullivan is, after all, right that Gilbert’s first idea is a limp retread. But Gilbert’s Mikado idea is so good we don’t need a scene showing Sullivan change his mind – the simple contrast of Sullivan’s chuckles and animated striding while Gilbert reads him The Mikado’s libretto with his boredom and constant questions to the abandoned libretto speaks volumes.

Jim Broadbent is outstanding as Gilbert. He has the repressed distance, the grumpy-old-man bluntness but he mixes it with small flashes of excitement and rapture that speak volumes. His fascinated glances at the Japanese exhibition – soaking up inspiration – are beautifully judged, while his later excited larking around with a samurai sword (the very next scene sees him with a first draft) is perfect. Broadbent is both supremely funny, with several perfectly judged mon-bots, and also heartbreakingly, unknowingly lonely in his distance and fear of emotional contact. Allan Corduner makes a perfect contrast as the brash Sullivan, enjoying fame in a way Gilbert never can, but sharing with him a tortured sense of his need to fulfil his artistic potential.

The rest of the cast – a delightful mix of Leigh regulars and familiar faces – are also fabulous. Lesley Manville is wonderful as Gilbert’s wife, a gentle, eager-to-please woman who we discover has carefully buried deep regret about her emotionally repressed marriage and lack of children (Gilbert’s own difficult relationships with his parents have had a long reach on his life). Timothy Spall is wonderfully entertaining as bitchy leading actor who reacts with quiet despair when his big number is cut. Shirley Henderson’s fragility is perfect for a woman whose stage presence masks her emotional vulnerability and drink dependence. Dorothy Atkinson and Martin Savage are marvellous as two actors whose willingness to carry on under all conditions is skilfully contrasted. 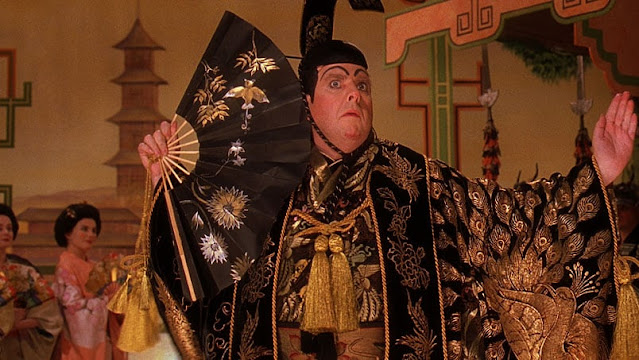 Leigh’s film is also a brilliant reconstruction of time and era (rarely can a researcher be so highly billed on a film’s credits). There is a delight taken in showing how the characters react to new inventions, from Gilbert’s bellowing phone calls (“I am hanging up the phone now!”) to Sullivan’s wonder at a fountain pen (“What will they think of next?”). The design from Eve Stewart, the glorious photography of Dick Pope and the Oscar-winning costumes Lindy Hemming all are perfectly judged. The film though never becomes buried in “prestige costume drama” trappings: it’s eye for history is to acute. From alcoholism to drug addiction, broken families to the seamier streets of London, this is a film that never succumbs to easy nostalgia.

What it remains is a loving tribute to the strange families the build up around theatre. When Temple’s song is cut from the play, the chorus come together humbly but selflessly to beg for the song to be retained, because of their affection and regard for Temple. There may be disagreements, but everyone pulls together to stage the show when the time comes. Leigh’s film is full of wit, affection and a deep, loving regard for those who have chosen a life of creativity. While the film can show the cost of such a life – and the contrasting emptiness and regret away from the stage, in a life which can doesn’t always provide satisfaction – it also celebrates art in a way few other films can. One of the greatest films about the theatre ever made.