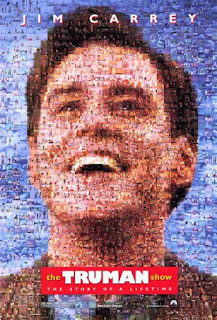 Have you ever fantasised that your whole life was a movie? It would be great wouldn’t it? You’re the star of every scene, the story lines always have a happy ending and you always emerge as the hero. But what if your life really was a massive TV series? What if everyone you had ever met was an actor playing a role? What if every experience in your life had been carefully scripted? What if nothing you knew was a real or even remotely true? That’s no-where near as fun.

Of course the odd thing today is that I suspect there are more than a few people out there who would still consider that a decent pay-off – even if they couldn’t know that they were on television, at least they would be on it. The Truman Show predated much of the surge of reality TV that was to come in the 00s, when shows like Big Brother made putting everyday (at least at first) people into situations and simply watching what happens became TV gold. Truman Burbank (Jim Carrey) is approaching his 30th birthday. Little does he know that his entire life he’s been at the centre of an elaborate TV show and that the hometown he has never left is a giant self-contained film studio. But as incidents begin to pile up, Truman suddenly questions his reality – while the show’s cast and production team work to keep him in ignorance. After all, we can’t let this ratings cash cow die!

With a precise, sharp and intelligent script by Andrew Niccol, Peter Weir’s film is a triumph. It’s partway between drama and satire, but never lets the one compromise another. It could have become a lumpen message film about the intrusion of media into our lives. Instead it’s an acute satire of TV gone mad, with a very real, sympathetic character who we invest in. Effectively the movie works on the same premise as the fictional TV show: the viewers know the world they are seeing is larger than life, but they know the character of Truman is grounded and true. It works as it bases its satirical attacks around a heartfelt story of a man (unwittingly at first) on a quest for freedom.

It’s two horses the film rides extraordinarily well – and even effectively comments on. Throughout the action we cut to the same regular joes watching the show: people in a bar, security cops, a pair of old ladies on a sofa. These people are aware they are watching a show – and watching a man effectively imprisoned – but have their emotions manipulated with ease, first by the producers then by the excitement of Truman’s very real quest. As they gasp and cheer as Truman works his way out of his prison, there is not a shred of acknowledgement to them that buy ‘booing’ the TV network they should also be booing themselves for watching in the first place. Instead they treat it just as another episode of their favourite show, the celebrations as transient and hollow as their tears of joy as the producers reintroducing Truman’s long-lost father in an attempt to ‘explain’ the strange circumstances he’s seen.

The Truman Show itself takes place in a perfect, unintimidating slice of 50’s inspired nostalgia. It’s a perfect picture of Americana – and its conservatism is itself a satire. Of course the producers set the show in the most cosy, comforting setting they could imagine. The rose-tinted past is always something we turn to for comfort viewing (take a look at the success of Downton Abbey). Alongside that, it’s a world run by advertising: Truman’s wife frequently stops to deliver scripted adverts, singing the praises of household products; a pair of old buffers have the job of pushing Truman up against a different advert hoarding every day; Truman’s friend Marlon praises their beer with every sip.

And in the sky: we have the studio itself, run by the shows creator Christof. Superbly played by Ed Harris, as part hipster artist, part messianic genius (“I am the creator” he tells Truman near the end, his voice coming through a beam of skylight, adding after a half-beat “of a television show”), Christof has carefully plotted Truman’s entire life from birth. He partly sees himself as Truman’s father – but he as much sees Truman as a tool he can manipulate for his own ends. A hands-on show-runner, Christof believes himself a genius whose will cannot be questioned. This softly-spoken dictator is a terrifying insight into what happens when self-appointed artistic geniuses can explore their ideas with no regard for morality and no restraints. 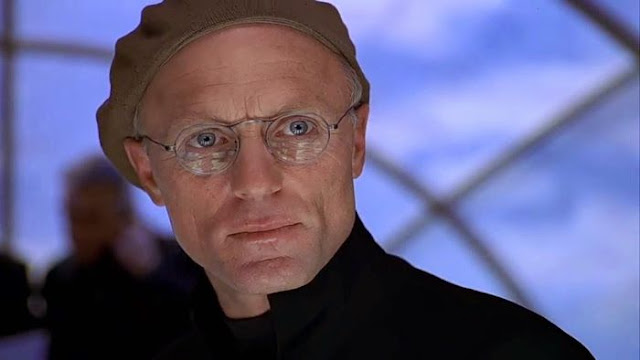 Truman himself is a charming, sweet, decent fellow – I suppose if nothing else Christof has done a superb job of bringing him up. But his entire life is a manipulated lie. The whole town is full of subconscious messages encouraging him to stay – as is the advice from his wife and best friend. Most cruelly of all, he has been deliberately traumatised into a terror of water by being made to feel responsible as a boy for the drowning of his father. Christof even boasts of his ingenuity in this “plot line” to help insure Truman would be too scared to ever consider leaving his home.

Jim Carrey was a revelation as Truman – Weir was the first director to refocus his comic mania into something more intimate and true. The part still makes a lot of hay from Carrey’s rubbery comedic chops – its part of Truman’s charm – but he matches it with a Jimmy Stewartish decency and earnestness. As the illusion begins to crack, his bemusement turns to something between disbelief and anger, but never compromises his humanity. You can see why billions of people watched him – and also understand why a man so accommodating and decent has not questioned his life before. Witty, gentle and human it’s a great performance.

But perhaps the film’s greatest strength is Weir’s sharp, clear-eyed, largely unobtrusive direction. The film makes nifty use of all the thousands of cameras contained in Truman’s world – with shots taken from button cams, CCTV, dashboards and all sorts. Its intermixed with normal camera angles, but gives us a beautiful sense of Truman’s world, and the TV world coming together throughout. The pace of the film is perfect and its slow reveal of information delicately done. Weir’s intercutting between ‘fictional’ and real world is superbly judged and the film wears its satire very lightly as well superbly mixing what could have been a dark film of imprisonment and abuse with a lightness and charm. Above all, it manages to both be a compelling story with a sympathetic hero and a sharp-pronged criticism of the shallowness of media and its viewing public.

It might well have been far too ahead of its time when it was released. It looks smarter and smarter each passing year. Truman’s world is an Instagram paradise, and with social media we’ve got even more used to spending our leisure time looking through other people’s lives rather than our own. It’s all part of what helps make Niccol’s script so sharp and prescient. Directed superbly by Weir and wonderfully acted – perhaps most of all by Harris’ Warhol turned dictator – it keeps you entertained, invested and leaves you cheering. Just like the viewers watching Truman being manipulated. Which makes you realise: is the film attacking its audience as much as anyone else? After all, we’d all watch this stuff in real life: look at how we rubberneck at accidents. What’s wrong with us eh?