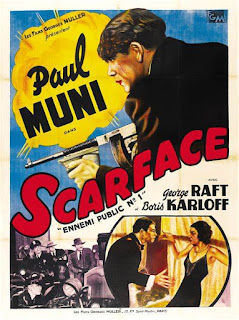 Before Tony Montana there was Tony Camonte. The suits may be sharper in 30s, but the bullets are just as lethal. Howard Hawks’ gangster film, strikingly violent for the 1930s (barely a scene goes by without a slaying), showcases the rise and fall of Tony Camonte (Paul Muni) an Italian gangster embracing the mantra “The World is Yours”. Starting as a junior hood in Johnny Lovo’s (Osgood Perkins) gang, he rises through the ranks due to his capacity for violence and his willingness to break any rule. He wants it all: money, power, Lovo’s girl Poppy (Karen Morley) and he won’t be happy until he runs this town. So long as he can still control his sister Francesca (Ann Dvorak) – because not even his best friend Guino (George Raft) can even think about touching her.

Hawks’ film is a dizzying whirligig of shootings, killings, mob violence and inventive camera-work. Fast paced and violent, many scenes are soundtracked by the rat-a-tat of Tommy guns. (Not a surprise in a film where the hero looks more excited grasping one of those in his hands than he ever does holding his girlfriend). Scarface has it all: fights, shoot-ours, car-chases, drive by shootings of bars, fist fights – you name it, Tony does it. It’s told with an electric pace and some nifty little tricks (my favourite a long cross fade of a calendar ripping off days and a Tommy gun blasting bullets, like its mowing down time itself).

Hawks uses a number of neat stylistic approaches to both present death and also signpost fate. Montage is used throughout the film, it’s inexorable build-up of violence and crime helping establish the excessive violence of Tony’s world. Shootings happen in a variety of ways, from silhouette to shadow to blatant on-screen death (though Tony’s fate, shot by several police guns, is the final blast, almost Bonnie and Clyde like as his body dances from bullet wounds under the streetlights).

You can get a good sense of whose card is marked by Hawks’ witty (and not overplayed) used of Xs. Before a St Valentine’s Day style shooting, the camera focuses on an iron girder above the victims with a series of X like metal cross beams in it – the camera returns to it, the row of Xs mirroring the victims lined up against the wall. Crime boss Gaffney is killed while bowling, his strike filled card literally marked with an X. The approach is subtle and even strangely witty.

The film is a maelstrom of excess. Starting in the aftermath of a wild party – which segues immediately into a gang hit – everything is overblown. From the violence, to the parties, to the wealth Tony builds up. It’s the same with the police as well – when it’s time for them to come out shooting they don’t hold back, assembling a small army of weapons fire which practically tears apart Tony’s apartment.

At its heart is a force-of-nature in Paul Muni’s Tony. Becoming increasingly Americanised as the film goes on (he starts heavily accented and the very picture of a scarred street thug, but becomes more-and-more accent free and smoothly dressed), Tony is not only ruthlessly ambitious he has a mania for getting more. Much like Montana, this is a man who is never satisfied until he has the world. He brags to his would-be girlfriend that he will only wear each of his new shirts once. He shows off his apartment and insists one of his henchmen (who is barely able to operate a phone) describe himself as his “secretary”. Muni’s performance mixes a grimy capacity for violence with a sordid impish delight at excess, all washed down with a childish lack of morality.

He’s also got a destructive obsession with his sister. Played with a coquettish charm by Ann Dvorak, Francesca is the apple of her brother’s eye. Is Tony even aware of the incestuous underlying his obsession? Any male attention at all sparks a jealous fury that goes way beyond a protective sibling. But there is perhaps as much to control as sexuality in this. Just as Tony wants to bring the entire city under his dominance, so he wants to control every element of his sister’s life. And in many ways she’s quite like him – as in love with flirtatious sexual excess as he is with the massive landgrab of power he’s carrying out.

Tony is moving shark-like through the city at every turn. Even while nominally following the orders of his boss Johnny (a strangely pathetic Osgood Perkins – but then power eventually makes all men weak in Scarface, even Tony. Perhaps it’s the fear of losing what you have?) he always pushes for bigger and bigger scores, making enemies Johnny can’t afford to make. The others seem paralysed in the face of him – Gaffney, default leader of the Irish mob, runs from safe house to safe house; despite the vast numbers of men following him, he never looks safe.

The film was criticised at the time for not having a sufficient moral message – tacked on in a studio reshoot was a more condemning ending with Tony (real “Shame of a Nation!” stuff), traces of which can still be seen in Tony’s brief flash of cowardice at the end. But really, in its excessive violence and cycle of destruction in a which an impulsive, brutal but not too bright killer (briefly) ends up on top was probably unsettling because it was a lot closer to the grim reality of organised crime in America. A world where the gun pays and a lunatic can take over the asylum. No wonder the censors at the time couldn’t take it. But Scarface’s compulsive violence, danger and relentless energy is what still makes it a classic today.