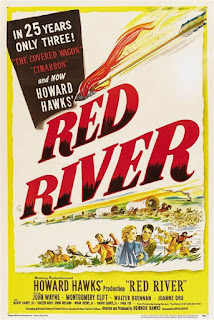 Some say Red River is, even more than Citizen Kane, the masterpiece in American film. That’s pushing it. But Red River certainly is a prime slice of beefy entertainment. Hawks’ first Western (and how odd a director so associated with them didn’t turn his hand to them until late in his career – and then only made six), there is no greater compliment to make than to say you could mistake it for John Ford.

In fact, Ford was beyond impressed, famously observing of Wayne “I didn’t know the big son of a bitch could act”. Act he certainly does here as monolithic obsessive Thomas Dunson (surely a forerunner to the equally troubled – and troubling – Ethan Edwards in The Searchers). Dunson has spent almost two decades building his Texan cattle empire. Unfortunately, the Civil War means the bottom has dropped out of the Texas beef market. To make good his investment, Dunson needs to take the cattle (all 9,000 of them!) up north to Missouri (over a thousand miles) to sell at a good price. Along the way, Dunson’s ruthlessly focused ambition tips into tyranny, with Dunson (literally) judge, jury and executioner among his team. Can his more liberal adopted son, Matt Garth (Montgomery Clift), stop Dunson from destroying everything around him?

Red River covers the movement of cattle up the Chisholm Trail, a huge economic migration that saw millions of cattle moved from Texas to where their price was increased by a factor of ten. But the film has only a passing interest in the history – and the romantic, nostalgic look at it here, as a sort of boys-own adventure that goes wrong, is far more about the movies than social history. What the film is really focused on is the personal clash between two generations of men: one a relic of the first years of the new frontier, the other younger, more modern in his thinking, with a streak of humanity the other has beaten down.

Hawks’ film mixes this up with some terrific location footage. How did they wrangle all those cattle? The film is very strong in capturing the sense of excitement in the Frontier – the setting off on the trail, with its quick shot cacophony of horse-backed men whooping with joy, is full of a sense of adventure. The film is a triumph of quick-quick-slow story-telling. The 15 years of Dunson’s empire-building passes by with montage and Wayne voiceover which begins and ends with Wayne in the same position, but the actor considerably aged. Context is skilfully and swiftly given to us, but the tensions between Dunson and Matt are grow and develop naturally, simmering for a good hour-plus before erupting. Transition text between sequences bridges us from scene to scene, and is especially effective in charting Dunson’s descent into tyranny.

Tyranny is what it is all about. This is one of Wayne’s darkest – but also greatest – roles. Hawks taps into the despotic rigidity in this slab of Americana. Dunson is a man utterly and completely convinced not only of his invulnerability, but his rightness, embodying American manifest destiny. Claiming swathes of land as his own, Dunson is a man on the move, constantly striding forward (Hawks often shoots him in progressive, shark-like motion). He’ll leave behind him everything from the woman he loves (with a shocking toughness, as he looks back on the burning remains of the wagon train he left her in) to the land he claimed, to anyone who lets him down.

Dunson is also a ruthless embodiment of a time before law. No one seems to question the way he executes those who cross him. Practically the first thing he does on arrival in Texas is out-draw and kill the man sent to question his arrival. His farmstead has a full graveyard. A dark comic touch is added with his insistence in “reading the words” over graves of men he’s killed. On the trail he has those who back out, run away or question his leadership whipped or shot. Wayne’s certainty as an actor tips into a (literally) black-hatted despotism. His manly focus and ability to outdraw anyone turns him in the end into a nightmare avenger, a Western Terminator.

Opposite him is Clift (equally superb) as a more modern minded kid. Matt is the sort of man who knows that at times a bit of bend and a sympathetic ear gets better results than a beating. Hawks brilliantly builds the love-hate relationship between these two men who have very little in common, other than mutual affection. (Clift and Wayne themselves were polar opposites in acting style, social views and personalities.) There is a real love there – which makes it all the more inevitable Dunson will view Matt’s questioning of him as a betrayal nothing less than blood will redeem. The two of them, and their clash (like the clash between two sides of America) dominate the film, not letting too many other characters have a look-in.

Of the rest, Walter Brennan is a very good as Dunson’s loyal number 2, who may not always agree with the chief but largely (if reluctantly) sticks by him (for all he mutters to him “You’re wrong Mr Dunson”). John Ireland’s cocky gunslinger, who joins the trail because he admires Dunson’s no bullshit attitude, promises much at first but fails to deliver on much-hyped clashes. (Possibly because Ireland fell out with Hawks over a competition for the affections of his future wife Joanna Dru, his role later cut to ribbons in revenge.) There is however a strange, almost homoerotic, link between Clift and Ireland – mutual respect leading to an admiration love-in and much fondling of each other’s firearms during competitive rock shootings.

Red River’s ending has gained some criticism – largely because the film builds its sense of violence between the two leads so well that it feels a bit of a disappointment that they are effectively told to pull themselves together (by a woman of all things!). But, for all the film mines the clashes between two different outlooks, it never loses track of their very real affection. Sure Dunson may talk about killing Matt – but he certainly won’t in cold blood (even if he happily guns down anyone who gets in the way) and at the end of the day, he’s still the closest thing he’ll ever know as a son. Matt is emotionally mature enough to know Dunson is to-all-intents-and-purposes his father, even if he’s not above throwing a few punches at him. The clash is effectively a narrative dead-end – for all it would be exciting to see them take shots at each other, this is a family. And most families fight and make-up, not plug each other with bullets.

And it distracts from the grand entertainment of Red River, its excited love for the open country (the late act scenes inside are as disconcerting for us as they are the characters). This is a western of psychological depth successfully mixed with grand adventure. It’s hugely entertaining but also feels very true. It has two wonderful performances from Wayne and Clift. It’s not the Great American Film, but it’s directed by a superb understander of cinematic narrative and a hard film not to love.