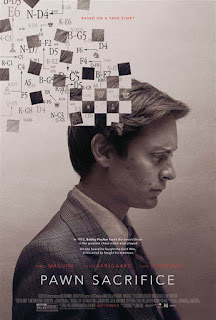 In the 1960s and 70s, Chess suddenly became world news. Like the space race before it, it was effectively a way for the USA and USSR to combat each other without the risky side effect of blowing up the whole world. The USSR had all the best players: until American chess prodigy Bobby Fischer emerged to shatter this monopoly. In 1972 the world seemed to come to a stop to watch the world championship clash between Fischer (Tobey Maguire) and Boris Spassky (Liev Schreiber) in Reykjavik. Ed Zwick’s film attempts to bring together the personal and the political – two superpowers using a game as a proxy for war – into an enlightening package. It fails.

The film opens with Fischer trashing his apartment in search for bugs on the eve of the 1972 final before flashing back in time. You’d expect the film to give us an idea of what bought our “hero” to this point. Zwick’s film utterly fails to do this. Now Fischer – very well played by an aggressively prickly Tobey Maguire – was a hugely troubled man. Though never formally diagnosed some combination of paranoia, OCD and a myriad other personality problems meant he was never more than a step away from self-destruction. Despite this he was deeply driven by an ambition to be the best chess player in the world. Its rich material, but the film never begins to get to grips with Fischer.

Could this be because it wants to tell an uplifting story – the film is really building towards the standing ovation Spassky gives Fischer in game 6 at the 1972 championship when Fischer whipped him in about 40 moves of perfect play – but is struggling with the fact that Fischer himself is deeply unsympathetic. A paranoid conspiracy freak who even by the standards of the 1960s was an aggressive, virulent anti-Semite (Fischer would later match Mel Gibson in his anti-Semitic tirades, blaming Zionism for everything from 9/11 down). A bully who refused to interact with anything except on his own terms, who cut all friends and family from his life for the most minor transgressions. There is no insight given here at all, or suggestion of what was wrong with Fischer.

It’s hard to hang a “triumph against the odds” structure – as Zwick’s unimaginative and conventional film tries to – around this. A far more interesting film would have used the 1972 tournament as an Act 2 triumph and then explored in more depth Fischer’s long spiral of self-destruction that would see him as a bearded eccentric ranting against Jews and America, in exile in Iceland. A film like that would also have then been able to properly do service to the idea of Fischer as a pawn of American state interests, who celebrate him when they want to rub the Soviet nose in it, but then drop him as soon as his purpose is served.

Instead, the film becomes formulaic and empty, leaving us with the impression that we learn nothing about Fischer at all. Why did this man of Jewish descent hate Jewish people so much? Was it self-loathing? What motivated him to seemingly self-destruct his own career so regularly? Was it a fear of being beaten? We have no idea. Instead that opening scene of Fischer destroying his apartment tells us everything we learn about the man over the course of the film. He remains an enigma – and since he’s also deeply unpleasant (the film skirts a little around how much) and we don’t get given any rich material to understand why he’s like this, he becomes a tedious figure to spend time with.

Zwick’s film also fails to communicate the cold war motivations behind this. Although there are the odd shots of the powers-that-be watching on TV in the Kremlin and the White House, we get no sense of how or why these powers are using chess to promote their own ideology. The film is endlessly reliable on vintage and reconstructed newsreel footage to constantly tell us directly things it can’t work out how to do with dialogue, from the political situation to chess moves. You learn nothing about the Cold War from this film. Michael Stuhlbarg’s lawyer turned promoter for Fischer states openly that he wants to use Fischer to show up the Russkies – but that blunt statement is it.

Instead the film is only really interesting when it is effectively recreating footage from the 1972 championship. And when a film’s strong points are recreating real events perfectly, you know you are in trouble. Zwick’s film lacks ideas, a compelling plot, insight or invention. It suffers badly today when compared to the far more dynamic and insightful The Queen’s Gambit (whose lead character is a heavily fictionalised female Fischer). Zwick’s film is him at his plodding, middle-brow worst, presenting a would-be epic shorn of anything of actual interest of controversy. The only thing that redeems it are decent performances from Maguire, Sarsgaard and Schreiber. Otherwise, this is an empty mess that tells you nothing at all about anything. You could checkmate it in about four moves.