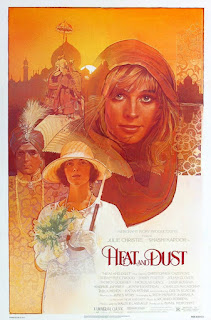 Adapted by Ruth Prawer Jhabvala from her Booker-prize winning novel, Ivory-Merchant’s production of Heat and Dust is much like the source: precise, admirable and both faintly enigmatic and intriguingly slight. In 1982 Anne (Julie Christie) travels to India to discover more about the life of her great-aunt Olivia (Greta Scacchi). In 1923, Olivia lived in Satipur as wife to local official Douglas Rivers (Christopher Cazenove). The Nawab (Shashi Kapoor) is the local Indian prince, a charismatic man who may or may not be in league with local bandits. Enthralled by India, bored by British India but deeply in love with Douglas, Olivia still finds herself drawn to the Nawab. Scandal is round the corner.

Heat and Dust is a delicate, well-mounted adaptation, but it never quite engages as much as it should. Perhaps this is because its central plot – a white woman is fascinated by India – is a familiar trope in both novels and films of the Raj. It does take a different approach by intercutting between the present and the 1920s. This presents intriguing opportunities to show ways India has changed physically (the homes of the British Raj have become offices) but also ways it has remained the same culturally.

This carries across in the contrasting stories of two women, both of whom become intrigued by their surroundings and romantically entangled with Indian men. While Olivia is (eventually) disgraced and ostracised by her community, Anne has the freedom to make her own choices. Both women find themselves drifting into life-changes through male seduction. Perhaps this is one of the points of the film in the end – that women, no matter the timeline, are people that things (or men) happen to, rather than being the true owners of their own lives?

It seems the case with Olivia, who never feels in full control her own life, but instead moves inexorably towards a destiny she can’t really influence. Charmingly played, with a sparkle and playful innocence by Greta Scacchi in her film debut, Olivia’s motivations are almost deliberately obscured. Although Ivory uses a device at first of Olivia’s letters being dramatised by Scacchi addressing the camera, this device is swiftly dropped. The letters remain a presence, but we never hear from them. Instead most of Olivia’s actions are narrated by her friend Harry (Nickolas Grace), now an old man. It places a distance between the viewer and Olivia, making her actions harder to understand.

But then that is part of the enigma. India is a land of heat and dust, where normal rules don’t apply and people (particularly those from the West) find themselves reformed by. Olivia has no time for the stuffy, racist British population (especially the frightful woman). But she’s drawn to the Nawab partly because he’s a fusion of East and West, an Indian exotic with the charm of an English gentleman. For his part the Nawab, very well played by Shashi Kapoor, plans a seduction but his motives are as hard to read as Olivia. Is it attraction or revenge on the British for their contempt?

Perhaps it’s a film where we look for deep meaning and motivations, but it is in fact about how we don’t necessarily make grand decisions about our lives, but make a series of in-the-moment decisions. Both Anne and Olivia never seem to proactively make decisions, but instead events largely occur to them. Although this can make for a film sometimes lacking in energy, it does avoid making things obvious for the audience. Even if that can be frustrating when characters remain almost deliberately oblique.

What’s also oddly frustrating about the film is its more modern section. The commentary comparing the present and the past promises much but actually adds little. Anne is a curiously uninvolving character, played with a sweet tenderness by Julie Christie. Anne is hardly proactive and there is very little narrative drive behind her exploration of the past. Strangely the issues the more modern section deals with – including digs at Western cultural tourists – end up feeling less relevant than the issues of race and empire in the 1920s.

And its unfortunate that the 1920s plot line, although well staged and managed, seems extremelt familiar – with echoes of A Passage to India and The Jewel in the Crown for starters. While it’s well acted (as well as those mentioned, Christopher Cazenove is very good) and creates an enigmatic atmosphere, you often feel you’re seeing something done better elsewhere. It starts as an investigation into the past, but becomes something more freeform, as if in the heat and dust of India, plans come to nothing. But its air of enigma and portrayal of characters buffeted by small events doesn’t come together into a compelling story or a rich insight into India.