Dr Strangelove; or How I Learned to Stop Worrying and Love the Bomb (1964) 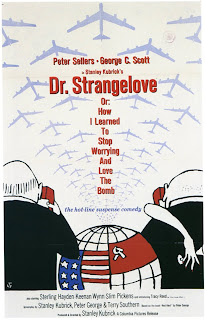 “Gentlemen you can’t fight in here. This is the War Room!” Kubrick’s hugely influential satire helped shape our perceptions of the Cold War and its mantra of mutually assured direction. Showing no mercy to its targets, it mixes Goonish schoolboy humour with moments of genuine tension and rising horror. Sure it features some of the faults of its director –self-importance, cold distance and much of the wit is due to Sellers and the performers rather than the not-particularly-witty-Kubrick – but there is no doubt it remains a seminal classic.

General Jack D Ripper (Sterling Hayden - excellent) orders his planes to drop their nuclear bombs on the USSR. Ripper is launching a pre-emptive strike to protect the American way of life from the Commies and, most importantly, to protect our precious bodily fluids. Yup he’s crazy, something his second-in-command RAF Group Captain Lionel Mandrake (Peter Sellers) quickly realises, but can’t do anything about. US President Merkin Muffley (Sellers again) reacts with horror at the prospect of all-out-war, negotiating with the Soviets to co-operate in shooting down the planes, while some of his advisors such as trigger-happy General Buck Turgidson (George C Scott, hilariously OTT) argue perhaps there is some merit in striking first. And sinister former-Nazi scientific consultant Dr Strangelove (Sellers one more time) spells out the impact of nuclear war.

Kubrick quickly came to the conclusion that if you were going to make a film about nuclear war, it almost couldn’t be anything but a comedy: after all the idea of two sides building a huge arsenal of weapons capable of destroying the world was so crazy, you wouldn’t believe it if you were told it. Dr Strangelove therefore ends up taking place in a world that’s one third grounded and two-thirds heightened reality. There is a great deal of college-style humour in the film (you can see it in those characters names which reference everything from the Whitechapel killer to female genitalia and excrement), but it works because its (mostly) played dead-straight. 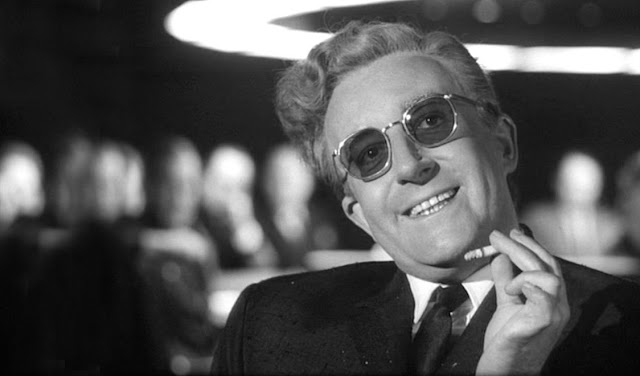 Part of the film’s appeal was the number of sacred cows it slays. All the things that, at the time, America was meant to respect were ridiculed. The military, politicians, the Presidency, America’s moral authority, the ingenuity of American science and engineering. It’s all shown to be ineffectual, misguided, underpinned by fascist-tinged insanity, myopically obsessed with big bangs over humanity or plain ridiculous. Every single authority figure in the film is deconstructed over its course as some combination of childish, empathy-free or useless. You can’t come out of this film and every again have an unquestioning assurance our leaders know what they are doing.

This works, because it’s placed in a film that in many ways has the plot of a far more serious film (its very similar of course to Fail Safe). Chunks of it are played completely straight, or with just the merest touch of the surreal. In particular the sequences set on the bomber, commanded by Major Kong (played at short notice by Slim Pickens after injury prevented Sellers taking on that role as well) have that true sense of Kubrickian detail in their careful staging of all the procedures a bomber crew would follow (even if it still allows some fun to be poked at the expense of the survival kit, the contents of which would give a fella “a pretty good weekend in Vegas”).

Those bomber scenes sometimes outstay their welcome in their cold technicality (it’s odd to say that a film as short of this sometimes feels a little overlong), but that’s largely because in a film that is clearly demanding us to shake our heads at the madness, it struggles to get us invested in a more conventional heroic story (especially as success there is starting a nuclear conflagration).

Perhaps that’s because of the coldness in Kubrick’s style – emotion doesn’t often find its way into his greatest works, and he was often reliant on working with the right people (get a McDowell in it or a  Nicholson and things can click, get an O’Neal and you can get a different story). Humour isn’t his strong suit, but fortunately he worked with Sellers at his finest hours. Sellers takes on three roles, all of them a sharp contrast, and he’s masterful in all of them. There were fewer more gifted improvisational performers than Sellers, and each of his parts benefits hugely from the dynamism (of various sorts) he gives them. It’s also interesting that two of them are actually the “one sane man” (Muffley and Mandrake) while Strangelove is a pantomime monster of insanity (introduced late in the film, he’s the final indicator that our fates are in the hands of complete lunatics). 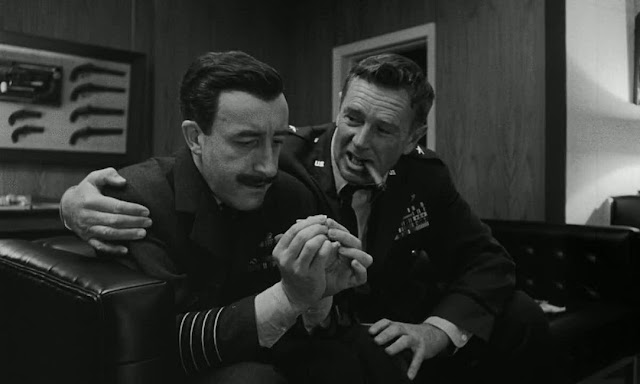 For Mandrake, Sellers parodied the stiff-upper lip upper class, with Mandrake a stuffed-shirt, attempting to wheedle recall codes out with Ripper with a clumsy bonhomie. Muffley is played almost dead-straight as a weak man out of his depth. But he does have a phone call monologue with the Russian premier (largely improvised with Sellers) that is one of the funniest things you’ll ever see. There’s no restraint in Strangelove, a wheel-chair bound grotesque with a phantom (hardcore fascist) hand, constantly suppressing involuntary Hitler salutes and trying to hide his mounting excitement at the prospect of worldwide annihilation (“Mein Fuhrer! I can valk!”).

Kubrick’s directorial approach – wisely – seems to have been to acknowledge that Sellers was providing so much of the madness and dark comedy the concept demands, that he could be more restrained. Interestingly, for being his most famous film, it often feels like one of his least personal ones. It stands outside much of the Kubrick cannon – it’s short, its often brisk, technically it’s unflashy and often unobtrusive – and it plays on the director’s weakest vein, comedy.

But it’s got his mastery of detail – partly also due to its faultless set design by Ken Adam. The reconstruction of the bomber interior is overwhelmingly convincing (the Air Force was amazed at how accurate it was). Ripper’s low-ceilinged office is a visual metaphor for the character’s insular insanity. Most influential of-all, the Bond villain-ish War Room, with its vast circular table and huge screens was so perfectly conceived, it cemented the idea for generations of what war planning rooms should look like (Reagan even asked where it was when he took office). The film may be darkly surreal, but its surroundings give it an authority that is essential for its success. 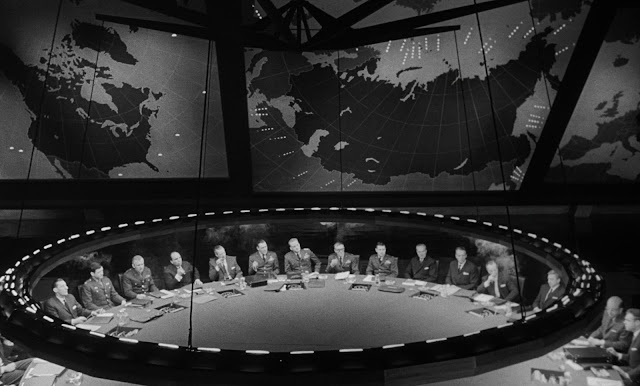 Authority is what the film needed to work. Perhaps that’s the greatest contribution of Kubrick, to create a structure of convincing reality, allowing the surreal and insane actions to work. From Ripper’s clear fixation on his own impotence (“I do not avoid women but I do deny them my essence”) – to Turgidson’s increasingly bombastic militarism (“I don’t say we won’t get our hair mussed, but I do say no more than 10 to 20 million killed. Tops.”), they all work because they contrast with a setting soaked in reality and detail. It also adds the important depth that gives the film impact: sure it wouldn’t happen like this, but something like this could happen.

Dr Strangelove’s humour has at times dated – there’s something undeniably schoolboyish about its tone. Stretches showing the detail of the bomber’s operation go on way too long. The film itself also takes a while to get going, and like many Kubrick films it has an air of being pleased with itself. But in Sellers it has a comic genius at the height of his game and its impact in changing the way we think about the world can’t be denied. Still a classic.