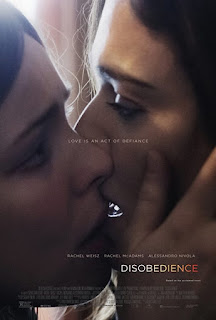 After the death of her father, a highly respected member of a Jewish Orthodox community in London, photographer Ronit (Rachel Weisz) returns from New York for his funeral. Estranged from her father, due to her rejection of Orthodoxy, Ronit has been quietly forgotten by her community. She stays with old childhood friends, now married, Dovid (Alessandro Nivola) and Esti (Rachel McAdams) Kuperman. Dovid, her father’s chosen disciple, has been offered his place in the synagogue. Esti is a teacher at the local primary school. However, Ronit and Esti are more than just friends – their love for each other being the unspoken reason for Ronit’s departure.

Disobedience is a tender, thought-provoking exploration of the struggles between faith and love – or rather the longing to be a part of a community, that rejects a big part of who you are. While Ronit is our entry point into this world, the real tragedy here is Esti. Both a believer in Jewish Orthodoxy and a lesbian, Esti has struggled her whole life to find a balance between these two. While Ronit has, to a certain extent, chosen – deciding to leave her family life behind to allow some personal freedom for her bisexuality – Esti has remained and tried to reconcile the contradictions in her life.

What works really well about Disobedience is that it avoids moral judgements. The Orthodox community is never condemned or hold up backward or wicked. Those who live in it may be traditional, but they are not cruel. Ronit felt she had to leave, and there is an awkwardness around her return (and she is not mentioned in her father’s obituary), but apart from a few individuals, the community acknowledges her. This proves especially effectively as it allows the film to focus on a very tenderly drawn love-and-relationship triangle between the three leads, rather than scoring easier political or religious points.

It becomes a beautifully acted depiction of a three close childhood friends who are torn between affection, bitterness and longing for each other. In particular, the love between Ronit and Esti is immediately apparent, but also the tensions of confusion, missed opportunities and confused messages. These are two women deeply in love, but held apart by pressures of their community and conflicts in themselves. Between them falls Dovid, the loyal scholar of Orthodoxy, desperate to make his marriage to Esti work but also feeling a genuine affection to his adopted sister Ronit.

There is no easy answers to this mess – and the film looks carefully at questions of freedom, choice and free will. How can you reconcile your faith and the pressures of your community with the things you want in your heart? How do you compress the guilt when you feel you are forcing choices onto someone you love? How willing are we to sacrifice everything we have grown up with to make our own choices? You’d expect the answers to come down on the obvious sides, but instead Disobedience frequently operates in shades of grey and complex, messy realities. Its endings are open, its conclusions emotionally strong but not clear-cut. It reflects the ambiguity of life in its refusal to supply simple, reassuring endings.

The film is directed, in a muted palette, with great sensitivity and restraint by Sebastian Leilo. The camera has a wonderful eye for passing moments, for suppressed looks of affection. He uses long takes to allow his actors to relax into their performances, helping them create characters who feel extremely natural. The moment when Esti and Ronit finally surrender to their feelings to each other is shot with an urgency and intimacy – which then makes the restraint of much of the rest of the film all the more striking, as reality returns.

He also constantly surprises us, skilfully shifting perceptions from character to character. At first we feel that this is the story of the rebellious Ronit, but as the story progresses Esti emerges as a truly tragic figure, while Dovid is a man holding back huge waves of doubt and uncertainty about the rules that have defined his life.

The three lead actors are wonderful. Weisz is edgy, cagey and unapologetic about the air of rebelliousness she outly displays – but its clear that underneath she is full of regret, grief and a powerful sense of loss about the family and love she left behind. McAdams grows in statue from scene to scene as a woman who seems naïve but actually is all-too-aware of the compromises life demands – and has struggled all her life with sexual feelings alien to her culture. Nivola superbly turns a character who could have been an obstructive bore into a man who knows suffering deep down with the knowledge that his functional marriage based on duty will never bring him (or Esti) the happiness he desires.

Disobedience balances these three characters wonderfully. At times it luxuriates too much in its languid pace and stolen, lingering glances – a sense of urgency is often missing. But intelligent, sensitive, respectful and with a respect for faith that many other films would have avoided, it’s brilliantly played and sensitively directed.