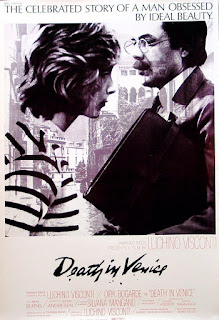 In the early 1900s a famed German composer, Gustav von Aschebach (Dirk Bogarde), travels to Venice for his health. A repressed artist who believes beauty is found not in the sensual but the spiritual, his world is turned upside down when he becomes fascinated/infatuated with a divinely beautiful teenage boy (Björn Andrésen) staying at his hotel. Gustav lingers in the city, never speaking to the boy, but reduced to watching him at the beach and following him and his family puppy-like through the city. A city that is on the verge of falling into a serious cholera pandemic. With Gustav’s health rapidly deteriorating, the title alone tells you where this all going.

That opening paragraph will probably also tell you all you need to know about whether this is the film for you or not. Increasingly, the idea of a famed artist starring with a longing, breathless admiration at a (very young looking) teenage boy (who is also at times shot with a coquettish flirtatiousness, increasingly aware that he is being looked at) has more than a whiff of Operation Yewtree to it. Take a moment though: Visconti’s extremely delicate and deliberate film largely manages to walk a tightrope between sexual interest and a deeply closeted admiration for physical beauty in the style of classical statues or paintings.

The film is not a leering pederast’s fantasy, but a melancholic meditation where this young man as much represents the loss of youth amidst a life of regret and closeted repression as it does sexual interest. Don’t get me wrong, sex bubbles under there. Gustav – even if he is struggling to process his own feelings – has a giddy schoolboy like love for this unattainable boy, something he seems aware he can (and will) never act on. Gustav becomes a rather tragic even pathetic figure. By the time the film ends and he has caked his face in the same “young” make-up that disgusts him when he sees it on the face of another ageing roue on his arrival in Venice, it’s hard not to feel he has lost his way. He seems aware death is knocking and that it is simply a matter of opening the door.

Visconti’s film is perhaps the ultimate arthouse classic. Long, slow, with lashings of Gustav Mahler playing while the camera slowly pans across incredibly detailed sets (rumour has it, even the unopened drawers were filled with period specific props) and lavish costumes. It’s got more than a puff of self-importance, taking as its subjects art, love and beauty. It’s the sort of film where nothing much really happens (there is no real dialogue for the first ten or last ten minutes), but what little happens is laced with an overwhelming spiritual and poetical importance.

The film is however outstandingly beautiful. Venice has never looked so striking – or so original. It’s not a picture postcard: the sky is frequently doom-laden pinks and reds, the streets are lined with litter, antiseptic wash and later small fires to burn away the bad air. But everything is presented with a painterly, if doom-laden, beauty. As mentioned, the period detail is exquisite and faultless. There are more than a few comparisons with Barry Lyndon in its obsession with detail, the pictorial and period over such trivial matters as storyline and humanity. Like that film it also has a languid self-importance, that has helped make it ripe for parody throughout the years.

And yet, it engages at some level slightly more than Barry Lyndon perhaps because Dirk Bogarde is a far more skilled actor than Ryan O’Neal. Bogarde is a master of the small detail. A huge portion of the film is basically Bogarde starring at Tadzio and letting a range of emotions play across his face: fascination, shame, fondness, intrigue, self-disgust, longing. Visconti frequently lets the camera just study Bogarde’s face as the actor thinks, capturing moments of almost youthful excitement that tip as swiftly into an old-man’s shame. It’s a compellingly cinematic performance from Bogarde, an actor who never quite gets the credit he deserves.

Of course, it’s also an important land-mark in gay cinema. It’s one of the few films where we have a man express a confused yearning and admiration for a beautiful teenage boy (films – such as American Beauty – which cover similar ground with men and teenage girls are far more common). Despite this, the film never tips into feeling too icky, largely because Gustav himself is a rather sexless figure. Flashbacks show his failed fumblings with (female) prostitutes and traces of a marriage with a wife (a silent Marisa Berenson – another Barry Lyndon link), with whom he shares grief at the loss of a daughter, but seemingly little else. The implication is that Gustav has carefully supressed all his emotions in to raise himself to a higher artistic plain. Tadzio perhaps shows him there is also beauty in youth and life, rather than just intellect.

Or you might think that’s just hogwash, and an excuse for a man in his fifties to leer at a pretty young boy. There are times when Visconti makes Tadzio too coquetteish, at times casting him in the role of distant seducer (although there are hints at least some of these glances and poses are in the imagination of the infatuated Gustav). Björn Andrésen has spoken about his discomfort in making the film (where Visconti and others allegedly tended to treat him with an icky fascination) and dealing with its legacy. Often the film plays more awkwardly today and while Visconti is partly aiming for the sort of admiration of beauty we see in classic Renaissance art – like Rubens co-directed the film – he’s still at times also positioning a young teenage boy as something close to a sex object. The film is not as simple as that, and its far from being crude while Aschenbach never feels predatory or dangerous only deluded – but touches of it are there.

Death in Venice has faced years of parody. It’s an easy film to snigger about, with its self-consciously arty look and feel. Visconti wants you to know this is an important film, and like Tarkovsky often hammers this home by making it slow and ponderous. But it’s also a beautiful and strangely engrossing film. A slow-paced two hours – pace that could have been helped if the heavy-handed flashback discussions about art between Gustav and piano player (lover?) Alfred had been trimmed out. Visconti directs it with a poetic mesmerism.

It’s got the feel of a classic painting. But it’s a film: and parts of that make it troubling at times. It never questions the appropriateness or not of this semi-sexual fascination of Gustav (for all that it stresses his increasingly pathetic delusion). However, it just about works because of the overwhelming air of tragedy and regret that hangs over it – and Bogarde’s delicately judged performance. Visconti indulges himself terribly here – but produces something that feels very much his own. Death in Venice is intriguing because its simultaneously bloated and self-important, but also mesmerising and beautiful.