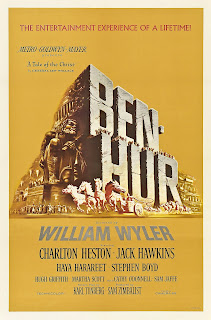 Ben-Hur is big. Hammering home its monumentalism, the poster features the colossal stone-carved title dwarfing the people below. It’s the sort of Hollywood epic where the numbers – 10,000 extras! 2,500 horses! Over a million props! 1.1million feet of film! 11 Oscars! – are as much a part of what you are sitting down to watch as the characters and story. Ben-Hur sits at the apex of the Hollywood Biblical epic: three and a half hours long, the most expensive film ever made (at the time). Age hasn’t always treated it kindly, and its eleven Oscars give it a sort of classic status it’s very hard for the first-time viewer to reconcile with what you actually see on the screen. Fundamentally, Ben-Hur is part spectacle, part pageant: some striking sequences linked together by the twee and the forgettable. Entertainingly middle-brow and over honoured, it’s a classic mostly because of what it represents rather than what it is.

Adapted from General Lew Wallace’s best-selling doorstop (he basically invented the airport novel, decades before the first airport ever opened), the story follows the fortunes of Jewish prince Judah Ben-Hur (Charlton Heston) in the early years of the first millennium. Ben-Hur grew up regarding Roman officer Messala (Stephen Boyd) as a brother. But when Ben-Hur refuses to help Messala identify Jewish insurgents, their friendship comes to an end. Before we know it, Messala suses trumped up charges to send Ben-Hur in chains to a life rowing as a galley slave while his mother Miriam (Martha Scott) and sister Tirzah (Cathy O’Donnell) are imprisoned. Ben-Hur survives the galleys – even becoming the adopted son of Roman Consul Quintus Arrius (Jack Hawkins). When he returns to Jerusalem, will he take his revenge on Messala? Or will the teachings of the mysterious preacher spreading the word of God change his life?

For bursts of its (huge) run-time Ben-Hur is gripping, exciting stuff. The action when it comes is superbly done and some of the moments of high-emotion really hit the spot. But it’s impossible to avoid that, for large chunks of time in-between, Ben-Hur is ponderous, overlong, more than a bit self-important and a little twee. Frequently the film grinds to a halt to parade its numbers: after all we need a long intro to the chariot race so we can see all those extras and horses. Things like this frequently don’t drive forward the story, or help the pace: but Ben-Hur was at least as much about wowing the audience as it was about telling a story.

William Wyler was offered more money than any director in history to bring it to the screen. He produces a film as faultless in its professionalism, as it is impersonal. Wyler – a director who worked best with actor-led stories – struggled with the vastness of Hur: his visual compositions often an awkward attempt to mix the width of the frame with the intimacy of two characters talking. His style doesn’t help here: the heaviness of the cameras made them difficult to move, making many of the conversation scenes of the film rather flat and dull to look at. Wyler doesn’t put a foot wrong, but it feels more like a competent professional ticking boxes.

It’s the big set piece moments – of which there three – which really have stuck in people’s minds. Those would be: the early scenes with Messala/Ben-Hur, the naval battle sequence and the chariot race. Outside of those moments – which are all, in their own ways, very memorable – it’s amazing to me every time I watch it how much of the film I fail to remember. I certainly had forgotten how damn much of the movie is left post Chariot race (over 45 minutes!), the film dragging on through the Miriam/Tirzah leprosy sub-plot intercut with moments from the life of Jesus (often with dialogue of the “He’s giving a Sermon on that Mount” variety). There are several moments in the film where events play out at great length inversely proportional to their interest.

But those set-pieces are great. The chariot race alone probably made the film the success it is. It’s ten minutes of compelling drama, gripping stunts: a feast of tight editing, dynamic camera work and thundering sound effects. Shot by a second unit – although, to be fair, supervised in its planning and editing by Wyler – it’s the heart of the movie. Viscerally enjoyable, it perhaps stands out because it’s the most earthy, exciting, real thing in a movie that can be rather stagy and turgid.

Running it close is the naval battle sequence – show-casing a gravely Jack Hawkins – very well-done (and disguising its water tank shooting origins), particularly because Wyler keeps most of the focus on the slave rowers in the bowels of the ship. While fire and arrows fly up top, and boarding parties clash, it’s from the slaves perspective that we see a vessel approach to ram the ship – and their terror at drowning that we feel. It’s another fine use of the epic big-screen. With virtually no dialogue, it’s also a triumph of visual story-telling, communicating a host of emotions and actions with brilliant efficiency.

The Messala/Ben-Hur sequences have stuck in the mind for other reasons. Long-running debates exist about who actually wrote the script. The credit goes to Ken Turnberg, but Gore Vidal long claimed his fingerprints were on most of the dialogue. (Wyler and Heston disagreed, giving the credit to playwright Christopher Fry – Heston even thanked Fry in his Oscar acceptance speech.) Vidal liked to claim he directed Boyd to play these scenes as if Messala was a spurned lover of Ben-Hur – taking an equal delight in claiming Heston had no idea of this subtext. Wyler argued he had no memory of this, and denied any such direction to Boyd took place. The truth will never really be known, but to me the idea of the writer on a film like this taking creative control seems a stretch. 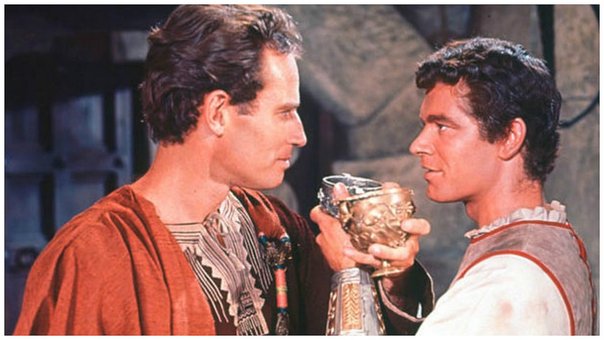 Anyway, it adds a frisson to the scenes – and its undeniable there is more than a touch of camp to them. To be honest I think a lot of this is due to Stephen Boyd’s OTT performance as Messala. He plays every single scene at a ludicrous pitch – throughout the chariot race he makes Dick Dastardly look the model of underplaying – and I can well imagine Vidal enjoyed taking advantage of his over-emphasis in these sequences to spin an amusing story of sneaking in a homo-erotic subtext.

The acting in general is fairly mundane – for all the film won two Oscars for its performers. Heston (in his only nomination) was named Best Actor. He’s a monumental actor, best used in roles that could have been chiselled from marble, but this is not his best (look to Khartoum, Agony and the Ecstasy or Planet of the Apes for starters). Much like Boyd he’s prone to over-emotionalism (most of the last 40 minutes feature him throwing his face into his hands), intermixed with moments of stony po-facedness. Hugh Griffith won the other Oscar (insanely generous considering he beat out Scott and O’Connell in Anatomy of a Murder) and his hammy, black-face is increasingly uncomfortable. Few of the other performers make much of an impact (although I enjoyed seeing an unbilled John Le Mesurier as a Roman doctor).

The one thing about Ben-Hur that lives up to its grandness is Miklos Rosza’s brilliant -and hugely influential – score. A brilliant mix of the inspiring epic, the grandiose and the deeply spiritual, you can hear its DNA throughout the works of John Williams and several others. It’s one of the longest scores of all time (three hours of music!) but it captures the tone of every scene perfectly, helping to build the overall effect.

It even manages to make some of the Jesus sequences work. The film is never more twee than when it touches on the Bible. Jesus is only ever shown from behind, but always as the classic long-haired, beatific figure, practically floating through the ether. Sequences that show the nativity, the sermon on the mount and the crucifixion have a Sunday School earnestness about them, largely free of drama and seem designed to be as inoffensive (and uninteresting) as possible. It’s when the film is as its most self-consciously earnest.

And Ben-Hur is a very earnest film. A professional job – with a director wrestling all those numbers – it’s got some striking sequences but even more flat, twee and forgettable moments. With acting that ranges from overly-earnest to just over the top, its classic status is more about what it is. The largest, most expensive, most honoured film of the Biblical epic genre. Its’ most famous for all those Oscars and the chariot race: in other words ten minutes of its screen time and garlands from a ceremony we often say honours the wrong films. Judged on film merits, Ben-Hur is not the best but not the worst. But it’s more about all its numbers, the vast array of things in it. It represents Big Studio investment: it’s about money. No wonder Hollywood garlanded it with so many Oscars.