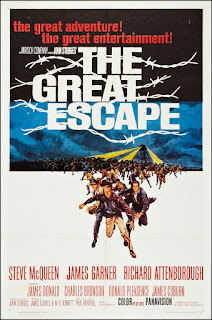 Is there a film in Britain more associated with holidays than The Great Escape? While I was growing up it felt like a day-off wasn’t complete unless the BBC screened it as part of their afternoon schedule. In Britain is has a status as a sort of cosy uncle, a part of the furniture of many people’s filmic lives. There is always something comforting and reassuring about The Great Escape. So much so, people forget it ends with a large bodycount and the majority of our heroes further away from freedom than when they started.

But it doesn’t really matter, because The Great Escape is one of the last hurrahs of effective, nostalgic war-films. The sort of hugely enjoyable caper that recognises the cost of war, but also celebrates the pluck, ingenuity and guts of Allied servicemen, running rings around those dastardly cheating Nazis. Where we would all like to look back and remember those days when men-were-men and worked together towards a common goal. Sturges has created a marvellous tapestry of a movie, that pulls together several striking scenes, characters and snippets of dialogue into a true ensemble piece that reflects the camaraderie and unity that exists between the prisoners as they work towards their escape.

In some ways, The Great Escape is such good fun, such well-packaged entertainment and telling such an exciting, uplifting and (in the end) moving story that it’s almost immune to criticism. You’d have to have a pretty hard heart not to enjoy it. And you’d have to be pretty cynical not to enjoy the way it presents a series of obstacles and then carefully demonstrates the fascinating and rewarding ways the prisoners resolve these. It’s also notable that, aside from the shadowy Gestapo types, the film doesn’t really have an antagonist. The enemy is that fence. Most of the Germans are just regular soldiers doing a job – it’s only the brutal final-act Gestapo who are aren’t playing this eccentric game. But this helps us sit back and enjoy the film as a caper – just as it makes the burst of machine-gun fire that (nearly) ends the film even more impactful and shocking.

Sturges’ gets the tone of the film spot-on, and also draws a series of perfectly balanced performances from his all-star cast. I think it’s fair to say a lot of the film’s success was connected to Steve McQueen’s casting in the crucial role of Hilts. McQueen channels a sense of 1960s anti-establishment cool into the film (unlike the rest of the POWs, he seems to be wearing basically his own clothes in t-shirt, chinos and bomber jacket). Iconically bouncing his ball against the wall in a cooler, a natural loner (who of course still does his bit), with a cocky sense of defiance and some exceptional motor-bike skills, Hilts is undeniably cool. He’s the face of the film – and the one you walk away wanting to be.

He also gets the film’s definitive claim to fame, with a series of daring motorbike stunts as he races across Germany to escape. Mostly performed by McQueen himself (although not the most famous fence jump, done by a stuntman) this last act chase is a gripping, action counter-point to the more cagey, paranoid runs of the other escapees. It’s so exciting and feel-good, it’s a surprise to remember that Hilts actually gets caught. But then, if he hadn’t, we’d have lost McQueen’s cool, wry shrug of acceptance as he and his mitt were sent back to the cooler in the camp for another 20 days.

The film tees up plenty of sub-plots for the rest of the cast, with Sturges’ spreading the love very effectively. Charles Bronson gets perhaps the best plot as “tunnel king” Danny Welinski who holds back his crippling claustrophobia almost long enough. I think this might be Bronson’s finest hour, giving a real vulnerability to Danny, with genuinely quite affecting whimpers and fear at confronting the tunnel – making his struggle all the more moving. Bronson makes a wonderful double-act with John Leyton as fellow tunneller Willie Dickes, the two of them forging an affecting bond of loyalty.

A similar bond also forms between James Garner’s suave and playful scrounger Jack Hedley and Donald Pleasance’s professorial forger Colin Blythe (has there ever been a more “Colin” Colin on film than Pleasance?). The final moments between this pair carry perhaps the biggest gut-punch of a film that has a surprising large number of them. Pleasance’s sad attempts to hide and combat growing blindness are genuinely affecting, while Garner is a master at conveying depth beneath a light surface. Sturges’ film taps into the nostalgic memories most of us have (or have picked up) of this war being one where life-long friendships were formed against horror and adversity.

Attenborough does most of the thankless heavy-lifting as Big X, but the film uses his Blimpish authority well. Gordon Jackson has a memorial role as the number #2 famously caught out by his own vocal trap (the sort of irony films like this love). Fans of the TV show Colditz can enjoy seeing David McCallum in a very similar role as a daring young escapee. James Donald channels British reserve as the senior officer. The film’s single truly bizarre performance is from James Coburn, with an Australian accent from the Dick van-Dyke school of ineptitude, so terrible even Sturges surely noticed it when cutting the film.

The Great Escape marshals all these cards extremely well. Any combination of any of these actors produces fireworks. It’s one of the best boys own adventure you can imagine. It in fact gets the perfect balance: you can spend a large chunk of the film thinking that being locked up in a German POW camp looks like the best time ever – and then it chillingly reminds you with its sad coda of the terrible cost of war. But it’s that first hour and half and its celebration of grit, guts, determination and ingenuity that really works – and it’s so entertaining that it solves immediately any mystery as to why any public holiday you’re 10-1 to find this popping up on your afternoon TV listings.