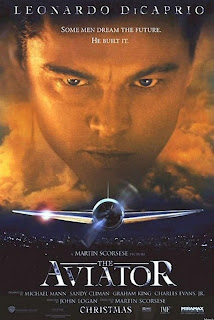 Howard Hughes grew up wanting to make the biggest movies in the world, fly the greatest plans and be the richest man in the world. He achieved all of this. He ended his life a wild-haired long-nailed recluse, terrified of stepping outside his controlled zone, a victim to crippling OCD. Martin Scorsese’s The Aviator is a triumphant, brilliantly engrossing, sumptuous exploration of Hughes’ years of triumph, where everything seemed to go right publicly – even while everything was beginning to go wrong internally.

It’s Scorsese’s second teaming with Leonardo DiCaprio – and while DiCaprio’s boyish good looks don’t really relate to what the real Hughes looked like, his charismatic enthusiasm, passion and determination brings Hughes triumphantly to life. It’s a brilliant performance, which dominates the movie. DiCaprio seems to completely understand power of driving ambition, who will mortgage everything he has time and time again to achieve his dream – and also the force of personality needed to turn those dreams into success. But obsession drives both success and eventual personal disaster. There is always something slightly fragile about DiCaprio – maybe its those boyish good looks – and here he brilliantly captures the tragedy of a man clinging to his sense of self, struggling with the demons within him.

Scorsese’s film gloriously balances the epic with the personal. It so brilliantly relates to the irrational but very convincing fears of those suffering from OCD, that scenes featuring Hughes obsessively plucking tissues from boxes, or stuck in restrooms scared of touching the door carry a real sense of threat. The grandness of much of the rest of the film – and the sense we get have how much more Hughes could have achieved – means the demons he carries are even more affecting. Imagine what he could have done, if he wasn’t terrified of even the smallest germ, or was able to put aside his destructive urge to control every inch of his environment and the people in it.

All this tragedy works because the grandness is so impressive. Scorsese’s film looks beautiful. The filming was inspired by replicating the visual and colour styles of contemporary Hollywood. The early 1930s-set section of the film apes the toned look of early-colour (green appears blue, most strikingly at a golf course) with full colour only appearing when the film hits the years of technicolour. The 1940s sequences are inspired by touches of film noir, leaning into the early days of epic technicolour by the end. It looks striking and also amazing. The production design is similarly breathtaking, while the film is shot and assembled with a wonderfully vibrant energy.

It’s also got plenty of wit. John Logan’s fast-paced script captures the sense of a fun of a man who was determined to turn his dreams into reality. John C Reilly is a lot of a fun as the weary number 2, constantly performing financial gymnastics to keep his bosses dreams afloat. Compulsion and obsession makes Hughes the sort of guy who will rebuild an aeroplane from scratch because of a minor flaw, or will reshoot a film because it will work better with sound. During the shooting of Hell’s Angels he keeps a private fleet of planes on the ground while waiting for clouds that will make the scene work. Frequently thousands of dollars a day are spent keeping projects ticking over, while Hughes waits for perfection. He’s not a man to compromise – and you can see why an artist like Scorsese would relate to that. While the film never lets you forget this obsessive perfectionism cuts both ways – and is as much a symptom of OCD as obsessive handwashing.

Scorsese’s passion for classic Hollywood clearly informs much of the first half of the film, that covers the shooting of Hell’s Angels and Hughes’ relationship with Katharine Hepburn. There are delightful cameos from Hollywood icons like Errol Flynn and Louis B Mayer. Playful references abound. The film’s emotional heart is the bond between the two larger-than-life ambitious figures Hughes and Hepburn. Cate Blanchett (Oscar-winning) is fantastic as Hepburn, a pitch-perfect impersonation that also captures her gsharp, uncompromising intelligence and no-nonsense energy. The chemistry between the two is spot-on. 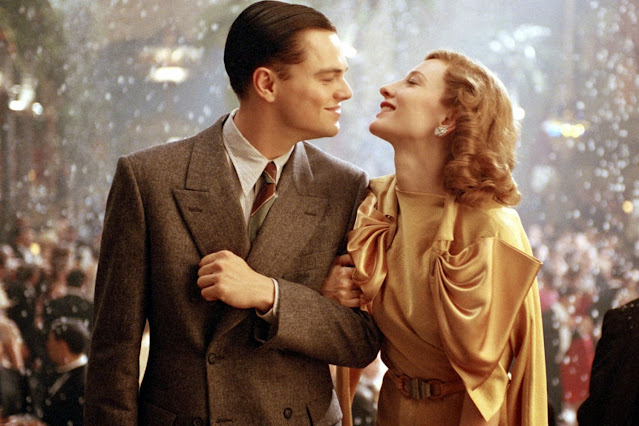 The film’s second half covers more the aviation of the title, with Hughes’ struggle to break the near-monopoly of the skies owned by PanAm, with his own airline TWA. With Hughes starting to teeter on the edge of OCD collapse, even while energetically setting records in the air and fighting battles in the senate, its perhaps even stronger. It also introduces nemesis in Alec Baldwin’s smoothly manipulative Pan Am chairman Juan Trippe and, most delightfully, an Oscar-nominated Alan Alda as a hypocritically corrupt Senator Brewster. The dinner and senate clashes between Alda and DiCaprio provide glorious energy to power the film’s final act.

It also serves as a last hurrah for Hughes. It’s DiCaprio that really makes the film work as this star burns itself out, finally succumbing to the compulsions that we know will see him end his days locked into a room at the top of a Las Vegas hotel. Moments carry a suggestion of fantasy - is Hughes imagining some of the shady figures he sees at the edges of frames? Are oddly toned late meetings with Ava Gardner (an underpowered Kate Beckinsale) an illusion? It's all part of the the powerful sense of tragedy of seeing him end, wild-haired, peeing into milk bottles and stuck into loops of repeating phrases over and over again. Scorsese’s film superbly captures the immense sense of lost opportunities.

The Aviator is undeniably grand and triumphant film-making, that looks a million dollars. But it also manages – in thanks to a superb performance from DiCaprio – to capture a tragic sense of a man who burnt himself out at the height of fame and success. It tells two parallel stories without us realising it: a man achieving his dreams, even while his nightmares consume him. With Scorsese’s perfectly judged direction and some wonderful performances, this is both a sprawling epic and a very personal story of loss. While it seems very different from the films we might expect from the master, I think it might be one of his finest works.