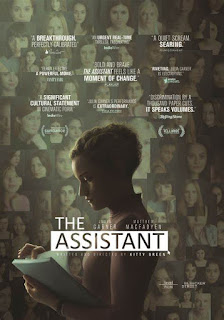 Jane (Julia Garner) is a low-level assistant in a Hollywood production company, run by an unseen movie mogul (but there’s no doubt that it’s Miramax and Harvey Weinstein). First in and last out every night, Jane is silent, downtrodden and treated as little more than a piece of furniture by the rest of the staff. Following her over one working day, from scrubbing semen stains out of her boss’ sofa and ending with her leaving the office as he takes advantage of another aspiring actress, The Assistant doesn’t have a plot as such. Instead it’s an experience film – a glimpse into an industry where abuse of your position is so common-place that it permeates every inch of a company, that is set-up to completely service the greed of its president.

Kitty Green’s film is very good at getting across the grinding, depressing, overbearing misery of entry level jobs. Jane slaves for hours at thankless, menial tasks. Coats are thrown at her, cups dunked down in front of her to clean, she is never addressed by name and barely has eye contact with another member of staff. Her contact with her boss is enraged phone calls after non-existent errors (for which she has to write grovelling email apologies) or tiny moments of praise communicated by third parties. Jane is still clinging to the dream of one day becoming a producer herself – but her day-to-day life is a never-ending stream of insults, misery and exploitation.

The film is also very good at showing how someone like Weinstein got away with it for so long. It’s because everyone knows – so much so that it’s become normalised, a part of everyday life, something that no longer seems outrageous or disgusting but just a part of how the business operates. People joke about not sitting on his sofa. Everyone knows what “private screening” is code for. People book late night flights so their boss can have time for his evening exploitation of young actresses. His erectile dysfunction medicine is delivered to the office. Headshots of actresses are printed off and piled on his desk, like a hardcopy of Tinder. The HR department goes out of its way to cover up his crimes.

Jane’s encounter with Matthew MacFadyen’s slimey HR manager is the film’s highlight. Concerned about a naïve young waitress who has clearly been plucked out of a country diner for the bosses perverse entertainment, Jane tries to raise her concerns with HR. She is promptly told complaints will destroy her career, be seen as her own envy – and that she doesn’t need to worry as she is not “his type”. MacFadyen oozes corrupt indifference.

It’s the film’s highlight, as it’s the closest it gets to a giving Jane a character arc. It’s the only time we see her pushing against her working environment – and then making a conscious decision to do nothing about it. While the film’s idea to cover a single day in Jane’s career, after she has spent weeks at the company, is successful in getting across the grinding monotony and everyday sexism and culture of abuse, it does mean the film effectively makes its point in the first fifteen minutes and then repeats it endlessly for the next 70. It also means that, while Julia Garner is very good her character largely hits the same note of downtrodden concealed pain and anger continually.

A more interesting film – if more conventional – could have charted several weeks, allowing us to see how the optimism and excitement Jane seemed to start with in her career was beaten out of her by her appalling abusive workplace. It would still have allowed us to grasp all the monstrous normality of the boss’ abuse, but we could have had a richer exploration of the impact on her.

As it is, The Assistant instead gives a brilliant sense of how horrible an industry can be when the greedy, destructive, vileness of its head permeates every inch of it. But that’s kind of all it says or tells us. It gives us a wonderful sense of what this workplace might be like – but its lack of event, plot or character dynamics means it doesn’t always make for rewarding drama.