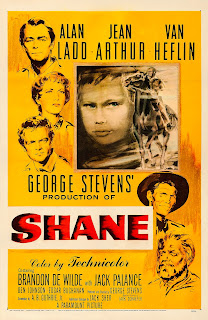 On the surface Shane is pretty much the definitive “white-hat-black-hat” Western. Crikey, Jack Palance’s vicious gunslinger Wilson practically wears nothing but black. Alan Ladd’s heroic Shane does what needs to be done, and the kid loves him to bits. But Steven’s film is more complex and intriguing than that. Because Shane is in fact only a few degrees away from Wilson. When he rides into the homestead, he is already weighted down by the memory of all the people he’s killed. Shane is no saint. He’s a tired man whose shed too much of other people’s blood to ever feel anything but an outsider.

Shane arrives at the Starrett farm. Joey (Brandon de Wilde), the boy-of-the-house immediately hero-worships this mysterious stranger with the distinctive guns. Joe Starrett (Van Heflin) is at first hostile but takes Shane in as a farm worker and he and his wife Marian (Jean Arthur) – maybe particularly Marian – are drawn towards this reserved but good-natured man. Starrett and the other homesteaders are in the middle of a feud with local cattle rancher Rufus Ryker (Emile Meyer), who wants to drive them off the land so he can use it for his cattle. Violence seems inevitable – but how long can Shane keep his unspoken pact to himself to put down his guns and try a life of normality?

Shane is one of Steven’s finest films, beautifully filmed with Oscar-winning photography and told with a lavishly poetic sense. It works so well because it juggles both a simple story, with a deep poetic understanding of humanity. You can see why this is “a Western for those who don’t like Westerns”. It’s got a beautiful, understated sense of struggle to it – the homesteaders against the bullying of Ryker – beautifully mixed with a sense of the dangerous glamour of violence. Match that with some wonderfully hissable villains and the honesty and decency of the Starretts and Shane’s quiet dignity, and you’ve got a perfectly judged morality play.

But the film works because there is so much operating on multiple levels. Which brings us back to Shane himself. Sure, he’s a decent guy. We expect him to be the hero. He fulfils much of that function in the plot. He’s kind and loving with the kid. He holds his cool and never seems to get angry. But why is this? The film makes clear that Shane has a past. A past of gun-slinging violence. And if Shane is still standing at the end of a life like that, he must have been good. And ruthless.

What was it that made Shane so desperate for a change? To try a life of normality, chopping down stumps and putting up fences on a farm? I suspect Shane in his prime wasn’t that different from the calm, cool and ruthless Wilson. You can see the guilt in his eyes when he finally shoots his weapon (at a rock!) two thirds into the film. This is a man who knows that killing carries a terrible burden – and he clearly knows all too well after sending so many to their graves. At the end of the film, with his emotional pean to Joey (“There’s no living with killing”) he’s speaking from the heart. And only someone who has killed many, many people – who doesn’t look remotely worried when facing off with Wilson and Ryker – could really know that. 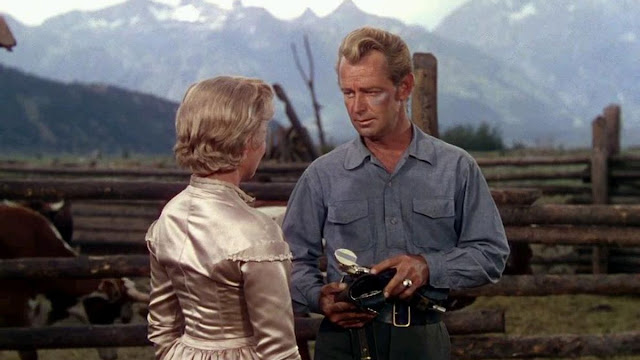 It’s an idea that you could miss in the film, but it’s there all the way through. The casting of Alan Ladd – who was never better – is crucial to the success of this. Imagine the strength and power a Wayne or Cooper or Stewart would have given Shane. They would never have felt so slight, or beaten down by a life of violence. But Ladd’s smallness, his sadness and his reluctance works for the part. Stevens continually shoots him as an outsider, on the edge of scenes or even isolated in crowds. He can fade into the background in the way other stars couldn’t have done. He feels like a man who knows he has been a moral failure, who isn’t redeemed by star quality.

Stevens plays with our expectations of Shane through the reactions of the Starretts. Joe is (tellingly) instinctively hostile to him at first, before Shane wins him over. Marian’s reaction is however fascinating. She is both slightly repelled by what she can see as Shane’s past violence, but also increasingly drawn towards him. Is this because Shane’s internal knowledge, his worldliness, his depths of sadness make him of a thoughtful kindred spirit than her husband can be? Joe is a simple man, decent beyond words, but not a thinker. Shane is more – for all his danger – and Marian feels like a woman who has accepted her place but perhaps dreamed of more. She would never act on this, but Shane to her seems to represent a path not taken.

And Joey? Shane is everything a boy could dream of in a hero. The man with few words who appears over the horizon with nothing but a six shooter. Stevens camera cuts back again and again to Joey’s adoring, worshipping face – and it’s an excellent performance from (the Oscar-nominated) Brandon de Wilde, as a young boy on the edge of becoming a teenager who wants to be a man, but still looks with the eyes of a child. Stevens throughout places the audience on the same level with Joey. Like him we want to believe in Shane, to see him play the hero. It’s part of the films skilful construction that it finishes before it occurs to you that the character the audience most closely related to was the uncritical, unknowing child. On first viewing we stare at Shane with the same hero worship as Joey.

Shane wants a life of normality. Shane isn’t a million miles away from Eastwood’s revisionist Unforgiven. In fact, Munny’s life in that film is basically Shane’s, without Ladd’s humbleness. The brutal killer who wants to live it all behind, but is dragged back in. Who finally faces off and guns down a horde of enemies in a saloon bar before riding off into legend. Sure, Shane will be remembed with more fondness by those he leaves behind – and he saves the homesteaders – but just like Munny he does it by leaving a trail of bodies behind him.

Steven’s beautiful film is both a compelling narrative of goodies and baddies, but also a profound, fascinating and challenging film. It’s wonderfully made and has a host of reliable actors at the top of their game. Ladd is superb, Jean Arthur brings great depth to Marian, Van Heflin’s Joe is a the sort of simple, decent, salt-of-the-Earth type the West was made of. Facing them, Jack Palance makes the most of limited screentime (and got an Oscar nomination) as the sneering, bad-to-the-bone Wilson. It’s a perfect mixture of small, intimate scale that seems to be taking place in an epic environment. It’s influence has been so profound it’s virtually an archetype. An American classic.