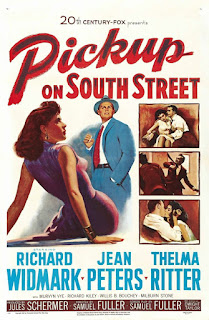 It’s 1950s, and the biggest bogeyman in America is the Commies. Candy (Jean Peters) is one of their unwitting couriers, funnelling top secret microfilm for her ex-boyfriend Joey (Richard Kiley) to pass to his Moscow superiors (poor Candy just thinks she engaged in helping Joey with some good-old All-American industrial espionage). Trouble is, while the Feds are trailing her, they watch her being pickpocketed by career thief Skip McCoy (Richard Widmark). Skip now has on his hands on some serious state secrets. Should he return the film to the police who want to lock him up? Or make a big score by blackmailing the Commies who want to kill him?

What makes Pickup on South Street so intriguing is it’s not necessarily as straight forward as you might think. Fuller’s film is an anti-communist film – the sort of “reds under the bed” scare that terrified millions in a country still reeling from Klaus Fuchs and the Rosenbergs. But this isn’t your standard Red Scare film. Because our heroes have about as much stake in the USA as they do in the USSR. They are the down-trodden, the under-class, the grifters. At the end of the day, I’m not sure Skip McCoy really cares who ends up with the MacGuffin. He’s motivated firstly by financial gain and secondly by personal revenge. No appeal to flag and country cuts any ice with him.

Making the hero this sort of anti-social career criminal was a master-touch as it not only enriches the entire perspective of the film – what has their country ever done for these people – but also adds an air of uncertainty over the whole thing. There would never be any doubt if the microfilm had fallen into the hands of a clean-cut Henry Fonda type. The fact that it’s Richard Widmark – who always looks like he’s torn between laughing in your face or punching it – means you never quite know what he’s going to do. If it works out best for him to hand that film over the Russkies, you can be sure he will.

That’s despite the heavy-handed entreaties of the cops and feds. Skip faces a barrage of hostile interrogations, vague promises, handcuffs and searches from law agents who are damn sure he has the film, but can’t prove it. Like many Fuller films, there is more than a hint of roughness and violence in every frame – and the law and order figures aren’t averse to this. Captain Tiger (what a name!) has already served a suspension for beating Skip in custody. An illegal search or two isn’t beyond them. You can see why the FBI was unhappy with this film – not least because it shows them constantly out-thought by a pickpocket.

The Commies though are a thoroughly bad lot. After all, it’s still an anti-Communist film. Richard Kiley’s snivelling coward Joey is no true believer, but the kind of low-breed opportunist tempted by a quick buck. The other communists we meet are corrupt, shady types, sitting in backrooms puffing pipes and casually handing out death sentences. Kiley’s weak-willed and increasingly desperate Joey becomes more and more despicable as the film goes on, desperation to save himself from the fury of his paymasters leading to ever lower and despicable crimes.

So the only people who really come out as truly decent – and playing by a very fixed moral code of their own – are the criminal underclass. In this world, everyone knows where they stand. Skip isn’t angry at stool-pigeon Moe, who carefully trades information with the police – everyone has to make a living he observes. Skip will pick pockets to earn his keep, and punch back when he’s attacked, but there is no sense that he has any taste for the crimes of the Communist agents. He’ll sell on the microfilm to them – but that’s only because his own government offer him nothing but hot air and empty promises. And, as the unspoken message of the film goes, what difference would it really make to Skip and his like anyway where the film ends up?

Instead Skip becomes motivated by personal feelings – specifically his feelings for Candy and Moe. There is a genuine sexual frisson between Skip and Candy from the start: Skip’s pickpocketing of Candy is shot like a sex scene, all sweaty brows, heavy breathing and close-ups (with Skip’s hands ‘penetrating’ Candy’s handbag with all the metaphorical energy of a train speeding into a tunnel). As events draw them closer together, the two maintain this electric sexual energy – whether arguing or fighting or lying to each other they seem unable to take their hands off each other – and the intimacy of close-ups and low angles Fuller uses for this brings a real sexual charge to their scenes. Widmark – superb as a heavy with a (hidden) heart – and Peters are also great, with Peters bringing a real roughened hinterland of disappointment to her role.

The other motivator for Skip becomes the stool-pigeon Moe, brilliantly played with an eccentric bag-lady energy by an Oscar-nominated Thelma Ritter. Moe is a grifter, selling ties by day and trading information on the side. She embodies the underdog nature of the criminal world, wanting nothing more than to earn enough to buy a decent funeral when she goes. Ritter has a marvellous speech on just how tied she feels from this constant scramble of scrapping by on the edge of society. A surrogate mother figure of a sort to Skip, Ritter’s performance is a classic piece of character acting.

Fuller’s scene is lean, short and fast-paced. Like many of his films there is a lot of violence – beatings, fights, shootings – all shot superbly with the camera pulling back to soak up the action. Sex and violence go hand in hand – Skip accidentally punches out Candy thinking she has broken in to kill him, and the two of them are in a passionate embrace moments later. Mixed in with touches of reality, that bring the tough urban world the characters live in, Pickup on South Street is a lean and mean film that manages to be more than just a straight anti-Communist film. It doesn’t just give us something to fight against: it also asks how we might give people something to fight for.