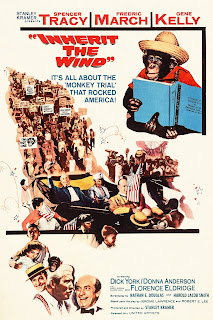 In 1960, Inherit the Wind was a parable. The teaching of Darwinism being illegal in a small town that defined itself by its faith couldn’t really happen today could it? So, the film used the concept as an angle to criticise the restrictions placed on free speech during the McCarthy years. The wheel has come full circle now: it’s no longer unlikely at all to imagine something like this happening. Indeed, versions of it have already taken place in America this century. This change does actually help the film look increasingly more prescient as time goes by.

A fictionalised version of the famous Scopes monkey trial (with most of the names changed, but many of the court room events fundamentally the same) a local schoolteacher, Bertram Cates (Dick Young), in a small Southern town is placed on trial for teaching Darwinism in his school. Staunch Christian and former Presidential candidate Matthew Harrison Brady (Fredric March) volunteers to put the case for the prosecution. Cates’ defence will be handled by the renowned liberal lawyer Henry Drummond (Spencer Tracy). Sparks fly in a courtroom and around the town, where many people are instinctively opposed to anything that can be seen to draw doubt on intelligent design.

Kramer’s films are often both praised and criticised for their rather heavy-handed liberalism. Inherit the Wind is no different. You’d be hard pressed to miss the message here about the dangers of intrusive laws designed to govern what we think and believe. Kramer’s film edges away from making criticism of fundamentalism too overt. Sure, the local preacher (a lip-smacking Claude Atkins) is a tongue-frothing “burn ‘em all!” maniac, only happy when stirring up an outraged mob. But on the other hand, Drummond is revealed to be a man of (liberal) faith – and, in an agonisingly heavy-handed final note, the film ends with him literally weighing The Bible and On the Origin of the Species in his hands then clasping them both together. You see – science and faith can work together!

While it’s easy to smile at Inherit the Wind’s striving for inoffensive liberalism, it means well and actually produces some effective court-room set-pieces. While its overlong – the sections outside of the court could do with trimming down and a rather shoe-horned plot with Cates dating the local preacher’s daughter (not helped by the blandness of both actors) promises much but delivers very little. What the film really works at is a chance for two seasoned performers to go at each other hammer and tongs in the court. Chances they both seize.

Spencer Tracy sets a template of sensible, liberal reasonableness mixed with a well-defined sense of right and wrong that would serve him well in a further three collaborations with Kramer. He brings Drummond a rumbled worldliness, a shrewd intelligence and a patient forbearance but never once lets us forget his righteous fury that this case is even happening in the first place. His courtroom performance hinge on a winning reasonableness that can turn on a sixpence into ingenious traps for witnesses. He’s a rock of decency in a shifting world and Tracy effectively underplays several scenes, making Drummond seem even more humane.

It also means that Tracy makes a lovely performing contrast with Fredric March’s firey passion as Brady. Sweating in the heat of the court, March’s Brady is overflowing with moral certainty and fury. March’s performance is big, but the character himself has a court-personae that depends on him appearing like an embodiment of God’s fury. It works because March gives Brady a quiet air of sadness. This is a man raging against the dying of the light – this case is his last hurrah. Brady is becoming yesterday’s news, but can’t seem to consciously accept this. In quieter moments, he is clearly a man of reflection and reasonableness – but (in a surprisingly modern touch) is all to aware that a raging public personae is what “sells”.

Kramer’s film is at its strongest when it lets these two actors go toe-to-toe. These moments aren’t just in the fireworks for court. Private scenes between the two show a great deal of mutual respect and even admiration. The two men are old friends. Drummond is very fond of Brady’s wife Sara (played excellently by Fredric March’s real life wife Florence Eldridge), who also regards him as a man of decency. They can sit on a bench at night and reflect on the good times. Brady may be a type of demagogue but he’s not a rabble rouser like the Reverend Brown (who he publicly denounces) even while he enjoys the attention of crowds. Drummond isn’t adverse to whipping up a bit of popular support – or enjoying the attention. It’s a fine contrast of two men who both similar and very different.

Aside from this, Kramer sometimes trips too often into rather obvious and heavy-handed social commentary. Gene Kelly is on good form in an over-written part as a cynical journalist - he sort of cares about justice, but only if its a good story and has only scorn for anyone else who believes anything. The film closes with a rather heavy-handed denunciation of his lack in belief in anything, compared to Brady's faith. The script is at times a little too weak – Tracy and March sell the hell out of a vital confrontation near the end, playing “gotcha” moments that the script largely fails to deliver – but there is still lots of meat in there. Some of the staging and performances – including the extended pro-religion protests that pad out the run time – are a little too obvious.

But at heart, there is a very true and increasingly more-and-more relevant message in this film – and when its acted as well as this, it’s hard not to enjoy it.