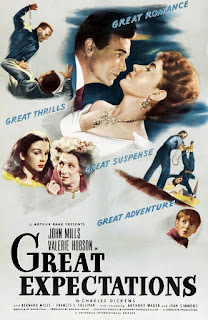 Of all Dicken’s books there is perhaps none so popular as Great Expectations – and no Dickens adaptations are more highly regarded than David Lean’s 1946 film. Of course, just under two hours is only time to tell a simplified version of Dicken’s original. But no-one’s taking the book away. What Lean’s film did triumphantly was turn Dicken’s prose into a clear cinematic language and style, without losing the uniqueness of the author’s voice. Lean’s visual mastery is perfectly matched with his experience as an editor of telling a story to produce an endlessly entertaining film.

As a young boy Pip (Anthony Wagner) encounters an escaped convict (Finlay Currie) in a graveyard. Intimidated, Pip brings the convict food and tools to escape his chains – acts which the convict clears him of when he is caught later that day. Weeks later, Pip is invited to the home of rich spinster Miss Havisham (Martita Hunt) to provide her and her adopted daughter Estella (Jean Simmons) with company. The visits continue until Pip’s apprenticeship as a blacksmith to his brother-in-law Joe (Bernard Miles) begins. Imagine Pip’s (now John Mills) surprise six years later when he is informed by lawyer Jaggers (Francis L. Sullivan) that he has come into money – that he has become a gentlemen of “great expectations”. Assuming it is the work of Miss Havisham – and that he is destined to marry Estella (now Valerie Hobson) – he is horrified to discover his life is more complex than he believed.

The film repackages Great Expectations a bit more into a romance. While the relationship between Pip and Estella, and the bond between them, is clear in the novel – and a large part of its plot – its but one thread masterfully woven together into the final storyline. Here this thread is given prominence, at the cost of several others. It’s not a complaint as such, but it makes Great Expectations into a more traditional story: a feeling added to by the film’s more conventional “feel-good” ending (very different from the much more uncertain ending of the novel, that Dicken’s edited back and forth in different editions to increase or decrease its hopefulness). However, it works for creating a film story, even if it loses some of the depth of the novel.

Its also more than balanced by how much the film gets right. Lean brilliantly captures the novel’s atmosphere, its gothic sense of impending dread, the burden of the past and the paranoia of persecution. For decades the opening scenes of the film, with its masterfully shot and edited mist covered graveyard (simultaneously a place of peace and a place of unsettling unknowability ) bursting into life through the grasping hands of Magwich, were practically used as a textbook example of cinematic language. Lean’s work is intensely cinematic. The mis en scene of Expectations is masterful – everything from casting, to camera angles to score comes together to bring Dickens world to life. This is exactly his London as he wrote it. It’s a wonderful expression of a particular author’s style, told using a mastery of cinematic language – from camera angles to editing cuts.

The characters have that perfect sense of eccentricity laced with menace that Dickens invests them with. Francis L Sullivan’s Jaggers is an unknowable legal machine who is part man of business, part fearsome fixer. Alec Guinness (in his film debut) is good-natured kindness to a T as Pip’s faithful friend Herbert (in one lovely scene he politely and gently corrects Pip’s primitive table manners). Finlay Currie’s Magwich captures the sense of danger and threat in the book’s opening that will become a fatherly meekness in the story’s later acts. 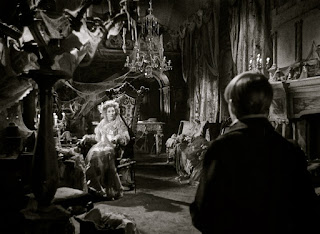 Largest of all, Martita Hunt’s gothic Miss Havisham sits like a giant spider at the centre of a decaying web. The design of Satis House – with its rotting wedding cake, sprawling cobwebbed dinner service, the heavy curtains and lack of light – is just one of the many perfect touches in the film. Hunt herself is superb as this outwardly eccentric aunt, who in fact has been nursing a core of bile and hatred that ends up only hurting those closest to her. There is something hugely dreamlike about Miss Havisham’s home – you suspect Lean may have watched some Cocteau – with its strangely angled table and mix of intimate framing and wide-angle crane shots.

Perhaps because we only see, not read, Pip’s actions in this film it’s impossible not notice what an arrogant snob he becomes. John Mills does decent work in the part, but (much as in the book) Pip ends up feeling like a slightly colourless figure. The film doesn’t always explore in detail the negative sides of his character meaning moments like his patronising dismissal of the kindly Joe (a perfectly judged Bernard Miles), don’t do the character much favours. Mills does however make a larger impression than Valerie Hobson, left slightly adrift as Estella. She’s not helped by how shiningly outstanding Jean Simmons as the young and preciously flirtatious Estella, the perfect picture of the little cruelties teenagers inflict on each other. (A braver film might have had her play the role throughout – but then Mills would look even older than he does!)

The film is very strong on the pain caused to these two characters – and that they cause for each other. More than any other version, we get a sense here of how Miss Havisham’s misguided aim to use Estella as a weapon of revenge on all men only manages to hurt Estella herself and Pip (her one true love as presented here). Just as a Pip’s snobbish dismissal of Joe stings. And Lean’s brilliant sense of pace and rhythm means that this plays hand-in-hand with Pip’s ever more desperate attempts in the second half to save Magwich from doom. 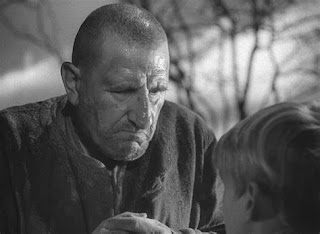 Many of the complexities of the plot (from Estella’s parents to Herbert’s marriage to several key characters) are cut out, but it’s striking how the film still manages to feel so faithful to the book. Lean’s understanding of Dickens mix of eccentricity and darkness is communicated in every frame. The major moments and characters from the book are beautifully bought to life, from that opening scene to Satis House. But also because small moments, like Wemmick’s “Aged P” remain in the film. Sure, the canvas has been reduced – and refocused into a love story of sorts – but the picture that emerges is still very much in the style of Dickens.

That’s what makes it one of the greatest adaptations of all time: it’s both an interpretation of the original and a beautifully judged capturing of its spirit and tone. An adaptation twice the length may have caught more plot, but would not have been such a fine movie. Because so much of this film’s imagery and drama sticks in the mind long after it is finished. Lean’s masterstroke here was to understand completely the heart of the book, and to focus the film on that. Brilliantly assembled, designed, shot and acted, it’s still one of the best literary adaptations ever made.