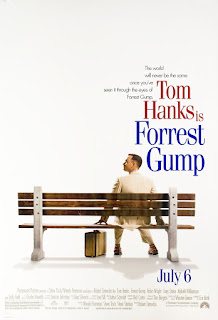 Oh dear God. It’s worse than I remembered. I hadn’t watched Forrest Gump since maybe 1995. I hadn’t liked it much then. But that might just have been my contrariness: sure I was going to find faults in the film that became a cultural phenomenon. Rewatching it today: actually no, I had good taste. This must be one of the worst films to ever win the Best Picture Oscar – and certainly one of the most unsettlingly twee, sentimental, conservative-minded pieces of feel-goodery to ever come out of Hollywood.

You surely know the plot. Forrest Gump (Tom Hanks, who to do him credit plays this one note character with real charm) is a good-hearted man with developmental difficulties (IQ below the 75 mark) who lives through some of the most turbulent times in American history. From racial violence in the 1950s, to Vietnam, the Cold War, the political turmoil of the 1970s, Forrest lives through it all. And largely lets it wash over him, never letting it intrude on his simple, folksy, homespun gentleness. Although that might mostly be because he also doesn’t really understand most of the things happening around him. He’s quite a contrast with the girl he’s loved since their childhood, Jenny (Robin Wright) who embraces everything the modern world brings (protest, politics, drugs) but of course finds her life much less rewarding and happy than Forrest’s “go-with-the-flow” acceptance.

Just writing it down I can feel my stomach turning again. At the time the filmmakers were very keen to promote the film as stridently apolitical. Yeah sure the film never praises, say Kennedy or Nixon, just as it goes out of its way not to state an opinion on either George Wallace or the Black Panthers. But the film is, at its heart, a large, beating, reassuring lump of rank conservatism.

It looks back at America’s past with rose-tinted glasses, portraying a world which would have all better if they had taken a leaf out of Forrest’s book. If we had all been just as uninvolved, decent, kind and stayed at home where we were happy rather than getting engaged in major social and political issues, everything would have been better. Forrest is a celebration of all-American virtues of honesty, bravery and loyalty – but the film is also an implicit criticism of other all-American virtues like curiosity, scepticism and challenging the status quo. Basically, the film celebrates the cosy attitudes conservatives adore and has nothing good to say about more liberal values. Sure, it doesn’t roll out a banner for Nixon – but you can also see this playing well at a Trump rally, with people saying we would be a happier country if we could all be a bit like Forrest.

That’s really tough on the film – and I imagine Zemeckis and co would be rightly horrified about that very idea – but it’s a film that doesn’t once challenge the audience at all. I was reminded throughout of Being There which took a similar concept: a man with low IQ finds himself at the centre of major events. But while that film was a satire – where the characters invest Chance’s gnomic utterings with profound wisdom – this film is a serious drama which encourages the audience to see a “deeper wisdom” in Forrest, to effectively treat him as a sort of prophet. There is a reason bland nonsense like “life is like a box of chocolates” caught on.

The original book was far more of a satire on the shallowness of modern culture. This instead plays like a sort of holy fool pilgrimage, with Forrest’s interaction with historical figures played for laughs. From showing Elvis how to dance, to (in the film’s most cringing moment) inspiring John Lennon with the lyrics of Imagine (another reason to hate Forrest), the film is crammed with gags like this. While the insertion of Tom Hanks into newsreel footage with Kennedy, Johnson and Nixon is impressive (although it has not aged quite so well), it’s not made with any point. This is because Forrest has no real appreciation of what’s happening around him. He’s merely moving from one event from the next – but this lack of engagement and understanding is held up as a virtue. And the very fact that it is, speaks to the film’s underlying conservatism and love for simple, small-town American ideals that shouldn’t be sacrificed to all that uncomfortable social and political change.

The film is particularly harsh on Jenny, decently played by Robin Wright, who is portrayed as someone succumbing to every trend and popular movement of the era. And whom the film consistently punishes for this by showing her emptiness, shallowness and unhappiness, until it finally consigns her to death from AIDS. Just in case we’ve missed the point, Forrest repeatedly urges her to come home – to stop engaging with the wider world and the problems in it and bury her head back into the sands of home, where everything is simple, safe and nothing changes.

The world of Forrest Gump is one where corruption and war mongering don’t matter because it happened a long time ago. A world where racial politics are too distasteful to mention (although since Forrest’s Granddaddy was a leading member of the KKK – a flashback played for laughs – that clearly wasn’t the case). Where the only black people Forrest encounters are the outsider soldier Bubba (who of course dies in ‘Nam – even in serious films, the Black Guy dies first) and his servile family whose names don’t even merit a mention, but who become the grateful beneficiaries of Forrest’s oblivious generosity. But there is no sense here of the dangers and violence of America (bar some nasty jocks at Forrest’s college) – which considering the film has a cameo from George Wallace of all people is really striking.

But then the problems of the world I guess don’t seem that bad if you just don’t think about them and instead go through life with a smile on your face, blissfully unaware of what’s happening around you. The closest the film gets to giving Forrest an opinion on something is when he is asked to speak at a rally against Vietnam – and even then the sound cuts out meaning we can’t hear him (though it seems to have been profound). A wittier film, like Being There, would have made this a moment for satire. Here it seems more like the magic of Forrest’s simplicity mustn’t be shattered for the audience by daring to suggest he actually has a view on something.

The film is a warm and comforting hug, that tells people the past wasn’t that bad and would have been better still if we’d just been nice to each other. That wanting to change the world is dangerous and greater rewards can come from going with the flow. For all Forrest is bereft by Jenny’s death, the film still rewards him with family, home and friends. It’s sentimental, empty, depressing crap. Well made, but simply dreadful. You may not know what’s in a box of chocolates, but you sure as shit will remember after you’ve vomited them all back up after watching this.