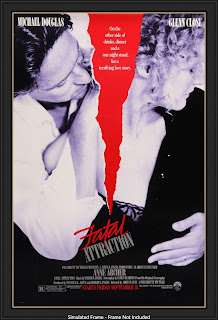 It was one of the biggest hits of the 1980s and was said to bring to life every man’s worst nightmare – which as David Thomson rather astutely put it, probably meant “too many men in the 1980s were worrying about the wrong thing”. Dan Gallagher (Michael Douglas) is a successful, middle-ranking lawyer representing a publishing company. He flirts with editor Alex Forrest (Glenn Close). Then one weekend, when his wife Beth (Anne Archer) is away with their daughter, he spends his time sleeping with her. Problem is, Alex won’t accept it was just a brief fling. Soon she’s calling his office, visiting his wife, claiming to be pregnant as part of a swift descent into furious obsession, demanding Dan leave his family for her. It won’t end well.

Fatal Attraction is a film that is going to struggle the more we move into the #metoo era. While in the 1980s audiences could be expected to be reasonably sympathetic to a man who just wants a bit on the side – and then feels oppressed by the moral consequences that follow – today it’s a bit tricky to feel the same. Put bluntly, Dan is a selfish man who is desperate to be seen to be doing the right thing. And while he realises he’s probably made a mistake after his first one-night stand, he still throws himself into a second day of flirting and sex with Alex (out of a sense of social obligation).

But then Fatal Attraction is a deeply conservative film that plays into feelings of fear and anxiety at the idea of the perfect domestic life being assaulted by an outsider. It portrays the damaging impact on Dan and his family as entirely the responsibility of Alex, instead of admitting that clearly both Dan and Alex are to blame for what happens. Sure, Alex becomes a (literal) bunny-boiler (this film is the origin of the phrase) and later a knife-wielding psychopath. But all this spins out of Dan’s selfishness and his fundamental lack of regard for the feelings of either his wife or Alex (both of whom he wants to think of him as being a good guy – which he probably isn’t).

Dan’s “have his cake and eat it” attitude is the real villain here – and while he is, of course, unlucky to hook up with someone as unbalanced as Alex, any perfectly rounded person would be expected to at least match some of Alex’s reactions. She’s right to say that he is shirking his responsibility, right to say that its wrong for him to use her for a bit of fun and discard her, and she’s right to be disgusted at his automatic offer to pay for the abortion he assumes she will agree to.

A more modern version of Fatal Attraction would probably play out a bit more like the TV multi-perspective drama The Affair (where Dominic West and Ruth Wilson’s characters split the narrative between their very different perspectives on a life-shattering love-affair). It would show more sympathy for Alex’s desperation, loneliness and sadness – and really explore what it is that happened in her past that made her react as extremely to rejection and betrayal as this. And it would have greater criticism for Dan’s cavalier attitude to other people’s feelings.

But then a film like that wouldn’t have been a hit. Glenn Close may not have liked the reshot ending – which came out of test screenings that showed audiences really wanted Douglas to kill that bitch – with Alex entering the Gallagher country home with murder in mind. But the final desperate battle between Dan/Ruth and Alex – and the nuclear family being re-cemented in the shedding of Alex’s blood – was what made the film such a hit. Because who wants the complexity of shared responsibility when “The Other Woman” can literally rise from the dead to strike one final blow before being gunned down?

The film also worked of course due to Glenn Close’s fabulous performance in the lead role. Close worked hard to not position Alex – for all the film aims to do this – as a creepy stalker. Instead she invests her with a righteous fury of a woman who feels she has been terribly wronged, whose every attempt at peace-making has been slapped away and responds with justified anger. There is a real fragility in Close – who consulted psychiatrists to understand Alex’s fragile mindset – and she never lets us forget the pain motivating her actions, even as the film becomes ever more melodramatic and turns her character into more and more of a horror film staple.

Opposite her, Michael Douglas is equally good. This was Douglas’ first in a run of roles where he seemed to embody something in the everyday American-man that lived in terror of female independence and sexuality (he would be terrified on screen by Sharon Stone, Kathleen Turner and Demi Moore over the next seven years). Douglas is great though because while he looks the American dream, he conveys this sense of weakness and compromise. He convinces completely as a rather weak-willed man, terrified of being made to face the consequences of his actions. Archer is also first-rate in a surprisingly low-key role as the wronged wife.

Fatal Attraction starts out as a fascinating look at morality and morals in modern America and ends as a slasher film. A more complex film might have lasted better – even if it wasn’t such a hit – but it throws just about enough depth in there, before the madness descends.