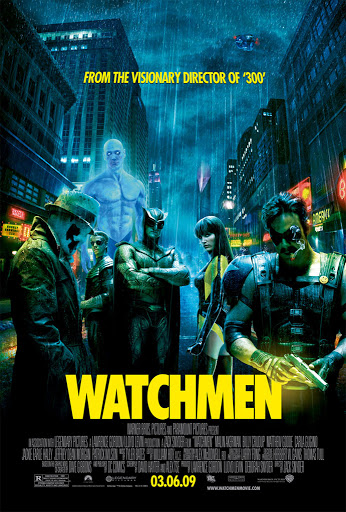 If you asked people to name the greatest Graphic Novel Ever, chances are they would come up with Alan Moore’s Watchmen. This scintillating deconstruction of superheroes and the morality of caped avenging satirises what the impact of superheroes in a real world might be. It had taken decades – and several cancelled attempts – to get a film version to the screen. So, if nothing else, Zach Snyder deserves plaudits for merely persuading Hollywood executives to get this expensive, R-rated, morally complex film to the screen. Sure, the final result isn’t perfect, but it’s got a fair bit going for it.

Watchmen is set in an alternative 1985 where Richard Nixon is serving his fourth term and the Armageddon of Nuclear war is just around the corner. Masked vigilantes had been a common sight on the streets – although banned since 1977. The Vietnam war was won (in a few days) by the God-like Dr Manhattan (Billy Crudup), a scientist granted superhuman powers in 1959 after an accident with a field generator. Most other vigilantes are retired, other than right-wing bully the Comedian (Jeffrey Dean Morgan). When the Comedian is murdered by a masked intruder, his fellow members of superhero group the Watchmen, worry someone eliminating them for reasons unknown.

Snyder’s Watchmen is a visual feast. Snyder – a huge fan of the graphic novel – used it as a visual bible, quoting it in several frames. The film is a beautiful mix of dark, filmic visuals and striking comic book primary colours, while frequently embracing the inky black murkiness of the violent world its depicting. Shot with the same high energy and dynamism as 300, Snyder’s ability to turn pulpy Warhol inspired visuals into fast-paced, filmic action is second-to-none.

What however is more of a shame is the feeling that the main things in Watchmen that interest Snyder might be the visuals. Where the film sometimes fails to come to life is where it deals with the complex morality of its heroes. The original deconstructed the morality of heroes. How a man with the powers of a God could come to look on humanity with an (albeit affectionate) distance. How a masked PI would be so convinced that right and wrong were certain that he would be willing to carry out acts of bone-crunching violence. That a hero could calculate sacrificing millions of lives for the greater good isn’t just acceptable, its recommended. That for others the exhilaration of spending their nights beating up criminals is an escape from the mundane realities of life.

The problem is that Watchmen never quite gets to the heart of these moral questions, of really tackling the rights, wrongs and shades of grey of those ethical quandaries. Rather than delving into them, ideas are too often stated. While its daring for a film to include heroes who are as deeply flawed, violent and, at times, even as unpleasant as this – it still doesn’t quite flesh out the complexities of this.

Too often the film takes a naughty pleasure in its violence and brutality, seeing that as a short-hand for presenting a morally unclear world. And at times wants us to go “how cool is that!” rather than asking “should I be enjoying watching indiscriminate slaughter from a vigilante”. Its telling that the recent HBO series of Watchmen – a sequel to the Graphic Novel set in the modern world – feels more like a true adaptation of the source material than this. That dealt with fascinating ideas about race in America, morality and acceptable sacrifices for the greater good (and still managed to work in plenty of action). By comparison, this film of the source material itself feels less deep. Now of course run time is part of that, but it should have been possible to make a film this long that more successfully combined ideas and visuals.

Snyder’s passion of the material is clear – but the film is often a little too obvious. From cuts to musical cues, it’s a film that pushes the envelope only in terms of its look and feel. It tries its best, but its vision of transmitting the depths of the original sometimes seem to stop at a faithful visual rendition of its style.

But it’s made with a lot of love and passion, not least in the acting. The decision to go largely with unknown actors pays off very well. Earle Haley brilliantly channels his character from the graphic book, a prickly obsessive with an unshakeable moral certainty. Crudup perfectly conveys the vast parental distance a real Superman would probably feel towards normal people. Goode’s chilling coldness and arrogance is perfect. Wilson gives the film heart as the closest genuinely decent guy. Åkerman does her best with a part that feels slightly underwritten and at times a plot requirement, largely defined by the emotions she provokes in the male character.

There are plenty of excellent moments in Watchmen but I’m not sure it ever really, truly becomes its own thing (in the way the HBO series did manage to do). In trying to so completely ape the visuals, and fit in all the plot, it becomes a companion piece rather than a stand-alone production. If Snyder had perhaps had a bit more courage to track away from the strict structures of the original source material it could perhaps have helped make a stronger film. However, saying that I can imagine the fans hitting the roof if he had… And Snyder’s ability to persuade the studio to make a film with such a nihilist feel and ending is to be commended. Watchmen is a mixed bag, but when it works it does work well.