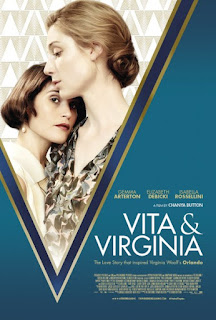 The love affair between Bloomsbury group writers Vita Sackville-West (Gemma Arterton) and Virginia Woolf (Elizabeth Debicki) inspired a successful epistolatory play by Eileen Atkins. It’s got all the elements you need for a love story: sadly none of those make their way into this limp, lethargic, languid film which drains any trace of passion from its material.

Where did it all go so wrong? The film expands the plays concept (two actors performing the various letters between the two lovers) into a series of conversations and throws in as characters the other members of the Bloomsbury circle. Sadly, what it fails to do is convey a sense of joi d’vive to any of this. The Bloomsbury crowd not only come across as pompous bores, but they never even really seem to be enjoying themselves. They certainly find it hard to get passionately worked up about any of these marvellous artistic ideas we keep being told they are having. The only thing we really see them talk about is sex, probably because it’s easier to put that on screen than writing.

The failure of the film is increased by the sadly misjudged performances by the two actors at its heart. It’s already a struggle to get any sense of chemistry between these two – I can’t put my finger on why this is, but there isn’t the undefinable ‘spark’ between them. Perhaps it’s partly because they both choose such wildly diverse acting styles, that their scenes never quite click together.

Debicki goes for a stately fragility, mixed with an emo waviness and seems to be playing every scene as if she subconsciously stating “my character committed suicide you know”. Arterton seems to try and compensate for Debicki’s overstated lip wobbling, by going for a jolly hockey-sticks brashness. Neither performance compliments the other and the effect is feeling like two very good actresses feeling constrained in different ways by the material.

It’s not helped by the flatness of much of the filming. I’ve seen Chanya Button’s work elsewhere (notably on television with some great work on WW2 drama World on Fire), but here she seems uncertain how to bring visual interest to this story. Too many scenes are shot with a murky lack of visual interest. Moments of letter reading are presented as the actors addressing the camera. Stylistic flourishes – such as Virginia’s visions of swiftly growing vines at moments of emotion – seem to come out of nowhere and jar with much of the rest of the traditionalism of the rest of the filming.

So instead, two fascinating intellectuals end up coming across as slightly self-absorbed bores in a relationship that never catches fire. Most of the rest of the cast fail to make an impact: Rupert Penry-Jones gets closest as Vita’s husband who oscillates between embracing their open marriage and demanding a wife who will fulfil a more traditional role. But for the rest, it’s hard to get any sense of their personalities with some performances – especially Adam Gillen – tipping too far into gurning comedy.

The general lifelessness of the film is made somehow even worse by the bizarrely left-field score. It’s a strikingly anachronistic slow-paced drum-and-base inspired sound that wouldn’t seem out of place in the late hours of a nightclub. Here it not only feels horrendously out of place – not least because it’s the only anachronistic touch either in the film-making of the performances, which are otherwise scrupulously correct – but it’s incessant throbbing beat actually helps make the film even slower, as if you were watching it in a slightly intoxicated haze.

Vita and Virginia should really have crackled with the vibrancy of the real-life characters and the passion of their love for each other and their shared ideas. Instead it’s a tedious bore that never sparks into life.