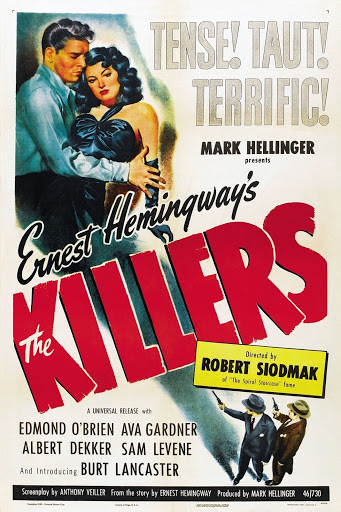 Ernest Hemingway’s short story “The Killers” is 3,000 words of tension and atmosphere, as a pair of hitmen turn up at a diner looking for a former Swedish boxer. They leave and a fellow diner runs to warn the Swede. He meets the news of his impending demise with a stoic acceptance that nothing can be done. That’s basically it. Siodmark’s film consumes the entire content of the source material in the first fifteen minutes. So the film basically expands and explores this set-up. The gripping opening is just our entrée into the film, that will explain to us why the killers are here, who the Swede was and why he needs to die. It makes for a tight, atmospheric and very well-done film noir.

Because there is no doubt that this is a classic film noir. The Swede’s backstory ticks all the boxes you would expect of the genre. Of course, all his troubles are rooted in a Femme Fatale (needless to say his former girlfriend is a saint). There’s a heist gone wrong, double crossing gangsters, a dedicated investigator and a range of locations from seedy nightclubs to rundown hotel rooms. The Swede (Burt Lancaster) is an easily-led handsome man, duped by a beautiful woman. Of course, it all finally leads to a series of shoot-outs, where the wicked are punished for their crimes. In many ways, the script (by Anthony Veillor, heavily polished by John Huston) simply turns the short-story into a familiar piece of genre work. What makes it work is the freshness with which it’s told.

Siodmark is not the biggest name director out there. But he’s a skilled professional and he elevates the material into something with deeper meaning. Perhaps it’s the Hemingway in its DNA, but this story plays like a Greek Tragedy. Fate intervenes at frequent moments, with chance and minor decisions circling back to reveal all. The Swede is a sympathetic heavy, out-of-his-depth, with the fateful flaw of being too trusting. Even the villains are vulnerable figures, while the femme fatale is only doing what she must to try and survive. It’s a neat structure.

And Siodmark shoots it with a beautiful, unobtrusive and pacey smoothness. Nothing in the film draws overt attention to itself, but every moment beautifully combines with those around it to create an absorbing whole. The pace works perfectly, and the film’s structure works very well. Throwing us essentially into the middle of the story increases the mystery – and also means that as we hear the story of each person who knew The Swede, we are constantly invited to rethink and reappraise events and characters we have already met.

It’s a film about the lasting impact of disappointment and disillusionment. Why doesn’t the Swede run a mile when he hears there are killers after him? Because its clear he died inside years ago – the bullet is just a formality. There is a rather touching romanticism to this. This strangely gentle boxer turned thug, who is so smitten by Kitty Collins that he can’t take his eyes off her during their first meeting. Who willing serves jail time for the stolen necklace she’s wearing. Who trashes his hotel and nearly flings himself out of a window when she leaves him. This is a shell of a man. And its not just him. Most of the crooks live out lives of disappointment and fear, while even our investigator seems to have very little in his life beyond chasing down insurance claims. If there is a message in this film, it’s that life is tough.

A lot of that impact comes from the sad-sack vulnerability in Burt Lancaster’s eyes. In his film debut here, Lancaster is at times a little raw. But what he conveys fantastically is the sense of a little boy lost. The Swede always looks out of his depth, dragged from pillar to post by other people, constantly unable to control the situations he finds himself in.

No wonder he’s so easily suckered by Ava Gardner’s gloriously savvy and fiercely determined Kitty – the character with the most drive and determination in the film. She’s smart enough to fool all the characters at least once – and ruthless enough to not give a damn about any of them. Gardner’s performance is spot-on here, with Kitty emerging as possible the most ruthless femme fatale this side of Double Indemnity – with Lancaster as much her gullible patsy as Fred MacMurray was. Gardner’s icy cool is so well done, that it adds even more weight to her performance of a last act switch to desperation, as events finally spiral out of her control.

Carrying most of the narrative is Edmond O’Brien in the slightly thankless role of the investigator piecing it all together. O’Brien however plays the role with a real savvy and drive, as well as with a growing sense of moral outrage – making his role much more than what it could have been (a feed for other characters). The rest of the cast is also very strong.

The Killers isn’t overtly flashy or eye-catching in the way of other films. But it carries with it a large degree of intrigue and more than a dash of hopeless tragedy. With sharp, efficient direction and some fine performances, it’s possibly one of the finest film noirs ever made.