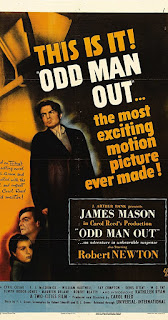 Is it set in Belfast, or is it set in Purgatory? We follow in the footsteps of Johnny McQueen (James Mason), a leader of “the organisation” (the IRA by another name), on the run in an Irish city with a bullet buried in him. With the police looking to bring him to book, Johnny has to find his way to safety – easier said than done when pain and blood-loss keeps you moving between consciousness and collapse. Is this Johnny’s dying fever dream? It’s a tempting interpretation of Carol Reed’s stunning Odd Man Out (the first of a hat trick of masterpieces from Reed over three years, the others being The Fallen Idol and The Third Man).

It’s a perfect marriage of styles. It opens with a sense of documentary realism that would do Rossellini proud, the camera flying over its unnamed Irish city. As we dive into the house where Johnny and his cell are hiding out, planning a robbery for much-needed funds, the film tips into a marriage of noir and classic gangster film. After the disastrous robbery, where Johnny shoots a man dead in a scuffle, the film becomes more and more an impressionistic series of vignettes as an at-times delirious Johnny stumbles from encounter to encounter, meeting a host of people who help or hinder him, many of whom want him for their own ends (from reward to bizarre artistic inspiration). All this is intermixed with his own increasingly tenuous grip on reality, some scenes floating and soaring with Johnny’s own fantasies and visions as the bullet in him slowly drains his lifeforce.

As Reed’s film increasingly moves into a world that is a few degrees less real than our own, you could argue that perhaps Johnny was dead from the start. That this is his own journey through some sort of Dante-inspired purgatory. His own odyssey, where he will encounter some who want to save him and others who want to damn him.  Reed brilliantly helps us share Johnny’s vulnerability by taking the film ever more off-balance. From Johnny’s visions of the past in the air raid shelter where he takes shelter we spiral down into a surreal bombed out house and an ending that has the sniff of Greek tragedy.

No wonder Johnny feels disconcerted, as this is a rag-tag city with its own rules. Half under construction, half well-established, where the streets are a mix of cars and horse-drawn cabs, Johnny’s journey takes him from dotty housewives to tramps to saviour priests and Dickensian artists. As his fever takes hold, so does the bizarreness of his settings, until he finds himself in an abandoned grand house leaking snow from outside, being painted by a drunken artist who wants to capture the moment of death on his canvas. It’s a million miles from the forensic reality of the robbery that the film started with. Yet it never feels out of place.

A large part of that is because of how brilliantly the film invests us in Johnny’s journey – with Reed’s inspired camera-work and story-telling pulling us into his experience. James Mason spends large chunks of the film in silence, but his performance is extraordinary. A man who seems partly aware that he’s dying, guiltily wanting to know if the man he shot died. Who even from the start seems to have lost his purpose, doubting if violence can bring the results “the organisation” wants, dazzled by sunlight after years in prison, who leads his cell through habit rather than inspiration. Mason’s brilliance here is capturing the very essence of suffering humanity, a confused and frightened man who struggles to understand what is happening around him. Buffeted by events, he’s sympathetic because he never feels in control.

Partly that’s because death feels like its always been waiting for Johnny. You can see it from the start, as he sits in his hide out wondering what its all been for. Kathleen (well played by an impressionable Kathleen Ryan) can’t get death off her mind as she talks about finding and saving Johnny or dying with him. Sympathetic priest Father Tom (a devout WG Fay) just wants to have the chance to save his soul. There is a sense of inevitability about the film – helped by Mason’s crumbling weakness – that destruction is coming and nothing can avoid it.

Reed’s film also has a brilliant sense of the compromises and shady questions of right-and-wrong. Johnny is a murderer and a terrorist – even if he also is a man plagued with doubt. Kathleen is a romantic and a fanatic. Hotel owner Theresa plays both ends against the middle. The coppers will do their duty, but they don’t seem vindictive, just determined to do what they must. There are no clear moral answers in this film, everyone has shades of grey.

It all combines together into one of the most inventive, dynamic and compelling British films of the 1940s by a director who was entering a purple patch where he could claim to be the greatest director in the world. This is a perfect fusion of styles – part realist, part impressionist – that puts you into a cold reality before tipping us into a poetic neverworld where the boundary between life and death seems blurred. With a superb performance from Mason (and the rest of the cast), this is still one of the all-time greats.