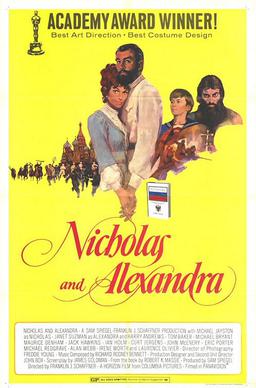 When I was growing up, Nicholas and Alexandra was a popular movies in our house. And, as a history buff, I can’t help but be sucked into it’s grand-scale epic scope (a cast of stars play out the beginnings of the Russian Revolution!). You can certainly look at Nicholas and Alexandra and see a film that at times is bloated and lacking flair. But as a representative of a particular type of genre, with grand scale production values covering decades of earth-shattering events in a three hours, it’s a thoughtful and at times even rather moving picture.

Nicholas II (Michael Jayston) is Tsar of all the Russias. With the film starting with his (typically) disastrous decision to fight the Japanese in 1905 (a war that literally sunk Russian naval dominance) we see a parade of misguided, poor and short-sighted-but-well-meaning decisions by Nicholas – encouraged by his strong-minded but politically naïve Tsarina Alexandra (Janet Suzman) – eventually lead to the First World War and a revolution that will overthrow him. On a personal level, the couple also deal with the heartbreaking haemophilia of their son Alexei (Roderic Noble) and Alexandra’s dependence on the destructive Rasputin (Tom Baker). As their lives go from supreme power to imprisonment and eventual murder, the film also covers a host of Russian politicians from statesmen to socialists, all of them wanting to build Russia in their own image.

Franklin J Schaffner’s epic sometimes gets a bit overwhelmed by its impressive reconstruction of Imperialist Russia – the set design and photography is wonderful and the film marshals the inevitable cast of thousands with skilful effect. What the film does very well is marry up the epic with the personal. Because this is both a chronicle of the reasons for the outbreak of the Russian revolution, but also a domestic tragedy of a royal family horrendously ill-suited to the high position birth has called them to.

The film’s vast scope does mean it has to make a frequent resort – particularly in its first half – of feted stage actors explaining events at each other. Particularly rushed are scenes featuring the socialist revolutionaries, where actors like Michael Bryant, Vivian Pickles and Brian Cox have to contend with bullet point dialogue and lines of the “Trotsky, let me introduce you to Stalin, he’s just back from Siberia” variety. Nicholas attends frequent meetings where the likes of Laurence Olivier, Eric Porter, Harry Andrews and Michael Redgrave carefully fill him in on what’s happened and the likely (invariably historically correct) outcomes. At times it does make the film a rushed pageant.

The film however makes it work by continually bringing itself back to the personal story of Nicholas and Alexandra themselves. The film is expertly carried by relative newcomers (at the time) Michael Jayston and Janet Suzman. Jayston – an astonishingly close physical match for Nicholas II – gives a perfectly judged characterisation of the Tsar. He’s a decent, well-meaning, dedicated and hard-working man who would make an excellent bank manager. As a supreme leader he’s a disaster – stubborn and so convinced that it is his holy duty to be father of the nation, while with a weary smile he short-sightedly vetoes any social or political progress what-so-ever. As one character tells him late in the film, he lacks any imagination: he can’t reinvent an absolute monarchy in the modern age, because it’s fundamentally beyond him to picture how anything can be done differently from hundreds of years of precedent.

Rational and calm he’s strangely almost more content out of power, focusing on his family and tending his garden. Not that his flaws depart – he remains an appalling short-sighted judge of character and situations to the very end (nearly every statement he makes is wrong). Jayston tackles a difficult role with ease and assurance – he carries most of the film and I think it’s only that Nicholas remains such a reactive character that Jayston doesn’t get more credit for his work here.

Much of the “nominations” attention went to Suzman, who has the more electric (but in some ways simpler role) as Alexandra. She brings to the marriage all the qualities Nicholas lacks – defiance, determination, ambition – and those are just as destructive. Just like her husband she’s stubborn and a terrible judge of people and situations, who clings loyally to terrible influences (like Rasputin) and puts her family and personal concerns above the preoccupations of the throne and the people. She’s prickly and harder to like than Nicholas (who she clearly dominates with her stronger personality) – but Suzman grounds her confrontationalism in a genuine love for her family.

The film’s second half, which largely focuses on the end of the regime and the last few months of the families lives being shuttled from one inhospitable safe house to another, makes a successful contrast with the grander scope of the first half. With the focus now more intently on the family themselves, particularly quietly contrasting their former supreme power with their new helplessness, it helps to bring out the heart. Schaffner’s film is very good at quietly building the dread as we head towards the inevitable end (the final few moments of the film are almost unbearably tense). In the whole family, only Prince Alexei seems able to comprehend that they are doomed. But removed from supreme power, Nicholas and Alexandra relax into what they would have been happier being: decent, kind, middle-class homebuilders.

Schaffner’s direction may not bring the burst of poetry that he managed with Patton – but he’s very good at building our empathy for these misguided and foolish autocrats. So much so, you’ll be screaming at Nicholas “Of course you should give the people a parliament!” while never actually hating him – because, stubborn and misguided as he is, he means well. However the film doesn’t let us forget what Nicholas is a figurehead of. Sequences demonstrating the sour, resentful poverty of most Russians are common – not just the 1905 march on the palace (that ends in a panicked officer ordering a massacre), but the grim faces of average Russians greeting the celebrations of the centenary of the Romanovs, while pissed aristocrats and Cossacks barrel about throwing empty of bottles of booze around. The tensions of Russia, and the inevitability of disaster, is never forgotten.

The all-star cast throws up several fine performances, backing the quietly assured leads. Olivier brings moral force as Count Witte – with an impassioned speech on the eve of the breakout of the first world war, all but breaking the fourth wall as the rest of the court continue their work around him. Hawkins demonstrates he has one of the most emotive faces in cinema as retainer Vladimir, while Andrews is bluff and loyal as Grand Duke “Nikolasha”. Irene Worth brings a sanctimonious pride to the Queen Mother’s talking truth to power.

There’s also some great work from less recognisable names. John McEnery (who should have become a bigger star) is fabulous as an impassioned Kerensky who finds himself stuck in the same mistakes as the Tsar. John Wood is very good as a Colonel feeling increasingly morally conflicted. Alan Webb is chillingly affable as their final warden. Later to take on the mantle of Doctor Who, Tom Baker gives Rasputin a mixture of restraint tinged with madness (as well as having the most prolonged death scene on film).

Nicholas and Alexandra is, in some ways, grandly old-fashioned. But it’s got a surprisingly strong heart and sense of empathy in it. It acknowledges the dreadful mistakes and stubborn lack of imagination of the Romanovs – and the many that their misguided principles led to poverty and death – but it also acknowledges both their well-meaning intentions as well as presenting their tragic ends. At times it’s a run-down of events of the final years of Tsarist Russia, but it also manages to tell an affecting family story of flawed people. It’s what makes it work.